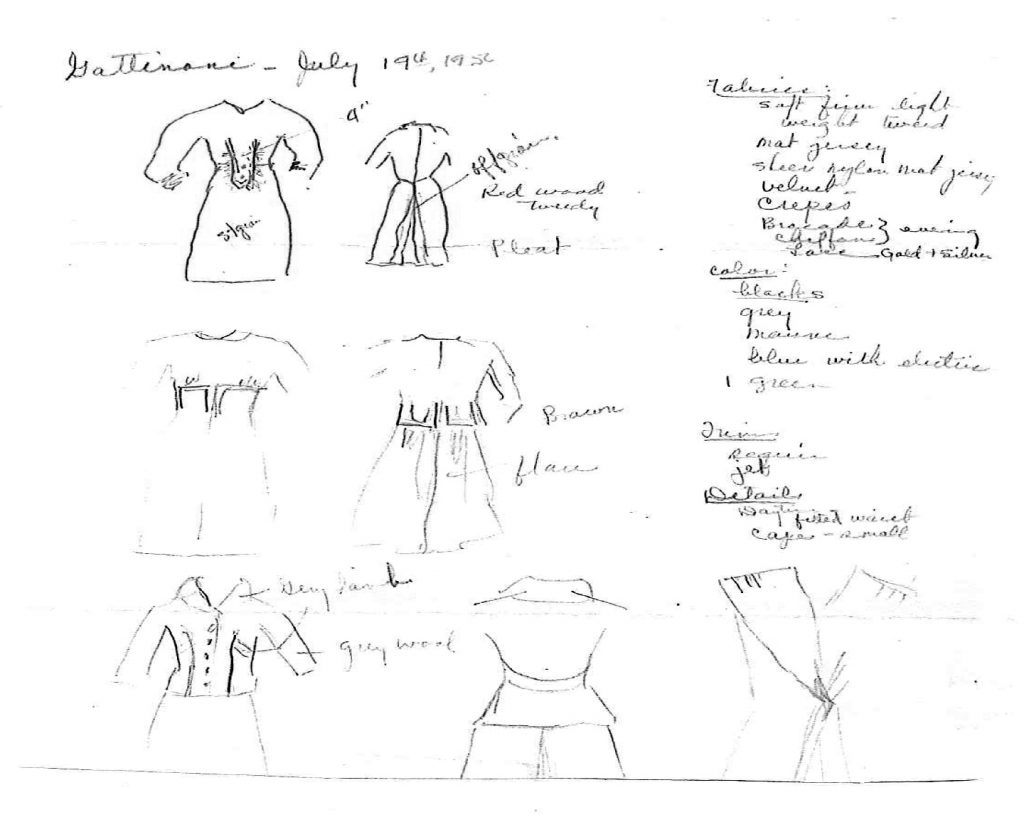 We were all in a dither because that day was the day of our first fashion show! It was scheduled to begin at 5:30. At 5 o’clock we were all out, each dressed in her best bib and tucker, complete with hats and gloves, to go to the place in the bus. We arrived on time and without any difficulty, but our reception was not too hospitable. We were told to stand to one side and wait until the people of the press, etc. were seated. We stood an hour (which seemed terrible at that time), and then we were allowed to stand in a small anti-room for the show. Miss Anders was quite put out, and Tina went to call the agency! Pretty soon some chairs and benches were brought in.
While we were standing in the anti-room, we got a good look at the people as they came up to the desk to present their cards. I was shocked and amazed at the way they were dressed! There were no hats, no gloves, many well-worn cotton dresses, some even quite soiled, some flat shoes, many bare legs. There were so very few well-dressed people that they stood out. And of course, there was our tight little group. Did we feel conspicuous? I surely did!
The fashion show itself was very good. The clothes were most wearable and beautifully tailored. Gattanoni, herself, had on a most beautiful linen sheath. There were no extreme clothes, but many types with clever details that were original. And we were served champagne or orange drink and some sort of pastry with fishy stuff. I had the orange drink, of course! I didn’t want to choke over something strange in polite society.
After hurrying home to dinner, we ate and rushed off again to the opera. This time was Pagliacci and Cavalleria Rusticana. I had seen both of these operas two times before and really didn’t care too much for them. My feelings remain about the same after the performances except that they were beautifully presented and the artists exceptional. Cavalleria Rustican was a bit livelier, and the music more to more liking, so the evening wasn’t really boring.
Since it was only 12 o’clock when we got out of the Baths, Nino our bus driver, suggested in sign language that we go for a drive in the moonlight. It was a beautiful night, balmy and bright with an almost full moon. We went by the Trevi Fountain again, and pitched some coins into the water, then up the Palatine Hill to a place where we could see all Rome spread out below us. It was a beautiful sight! So different it was from the American cities with their regular rows of bright electric lights. Rome has more mystery with silhouettes of strange ancient buildings sticking up in the dim glow of tiny lights they use. And dominating all is the great dome of St. Peter’s Church.