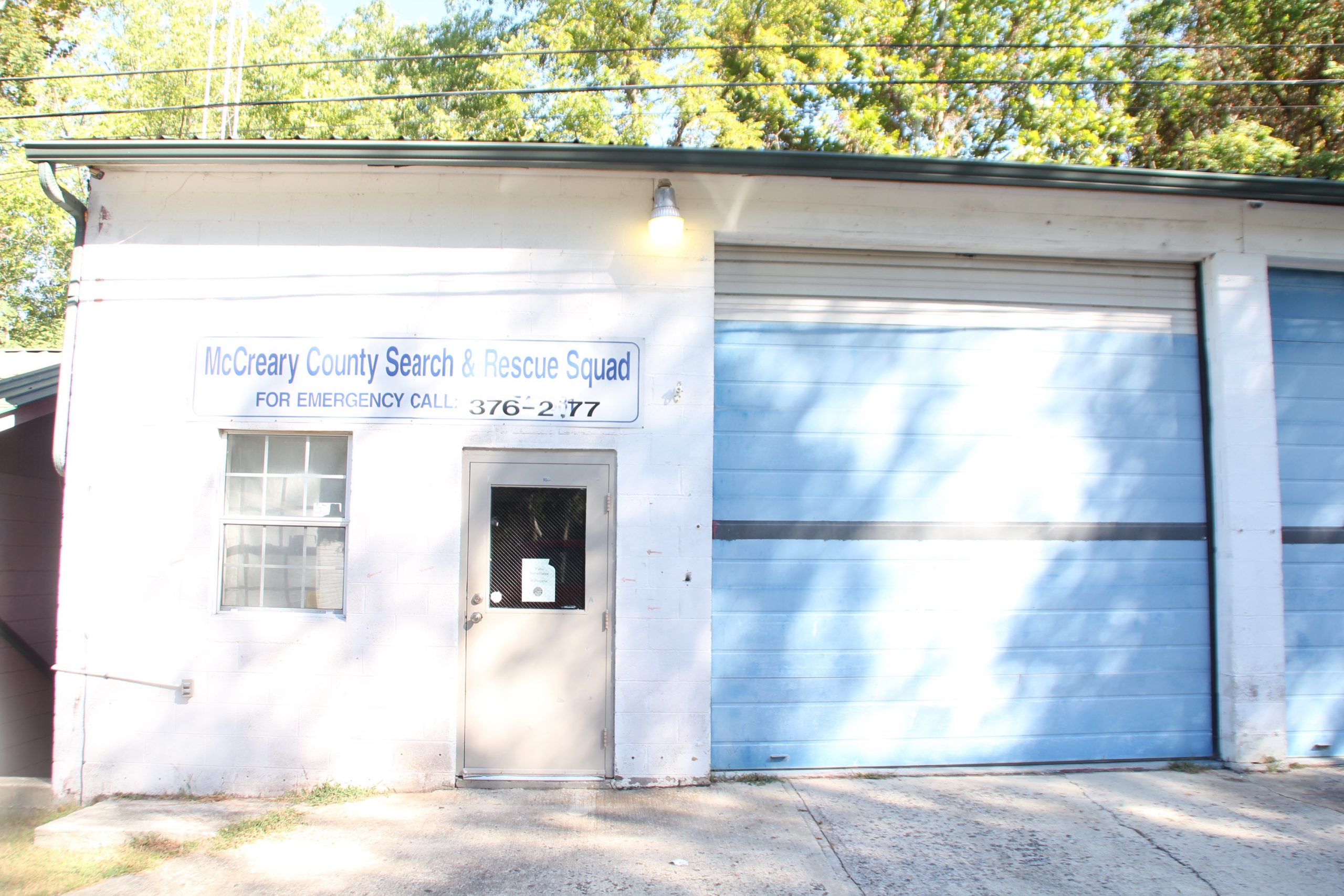 Photo by Greg Bird
The building that houses the McCreary County Rescue Squad could be vacant by the end of the month after the Board of Directors voted to close the unit and pass duties to local fire departments.

By the end of this month the McCreary County Rescue Squad will be phased out, with all duties and responsibilities being passed on to local volunteer fire departments.

While this is an end of an era for volunteer organization that were first responders for lost hikers, missing children and other emergencies, county officials state that those services will still be provided – just under a different guise.

Last week the Rescue Squad’s Board of Directors met and voted to disband the volunteer unit; passing on the responsibility for rescue operations to fire departments in an effort to broaden the response in emergency situations.

Stephen McKinney, McCreary County Emergency Management Director and Rescue Squad Board Member, said the board didn’t come to the decision easily, but they ultimately believed the budget issues facing McCreary County and the difficulty maintaining a full roster made it clear that continuing to operate the squad was going to be difficult in the future.

“For years, the McCreary County Rescue Squad has been tasked with a service area that covers the entirety of the county, and often times they even go beyond our own borders,” McKinney said. “They have done so with a very limited budget and roster.”

“The Board had been looking at options for a while now. The possibility of shutting it down was one of those options we had to consider. We met last week and came to a difficult decision. But, we felt shutting it down would be in the best interest for the county with the financial situation it is facing.”

With local fire departments having better funding and expanding their capabilities to include more certifications, the Board felt the departments would be able to carry on rescue duties without much of a transition.

Local fire departments, such as Whitley City and Pine Knot, carry certifications for high angle rescues, swift water operations and vehicle extractions. McKinney stated that fire departments already had many capabilities that the Rescue Squad was charged with, so it seemed a natural fit to make a change.

Board members had spoken with members and administration of the fire departments over the past few months to discuss the possibility of assuming duties, and the response was generally positive.

Representatives of all five local volunteer fire departments met with the Board last week to discuss the possibility and reportedly agreed to take over duties at the end of October.

Whitley City Fire Department Chief Tony Miller said Tuesday the departments would form a combined unit of rescue personnel from each of their respective rosters, with a collaborative leadership structure.

Instead of one department assuming all duties, each station will have several members serving on the rescue unit – ensuring that the majority of the county would have a member nearby when needed.

The benefit to the new structure will allow for potentially quicker response time, as units from the department in the area can respond to a scene and ascertain what type of response is needed and coordinate what materials and equipment are needed.

Funding was always an issue for the county and the Rescue Squad. Allocated only $5,000 per year out of the General Fund, the limited resources have hindered the squad from upgrading equipment, training opportunities and other issues.

That funding will now revert back to the county, as the fire departments are separately funded through their own tax. Fire officials say no new tax or tax increase will be required to assume the duties.

Additionally, the county will save money by not needing to carry insurance on the squad’s vehicles and equipment.

The existing equipment will be transferred to the fire departments to store and utilize as needed.

As a potential means of increasing revenue the Rescue Squad could have sought to impose a tax, as it could have been considered a Special Purpose Government Entity in certain instances. To do so would require the Fiscal Court authorizing the Board to be a taxing agency.

McKinney said the Board did not wish to consider a tax at any point.