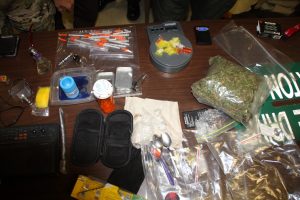 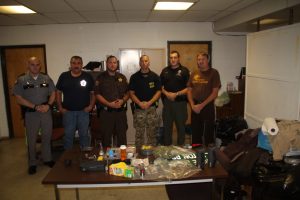 The first operation resulted in five arrests Sunday night as officers went to a Marshes Siding residence in an attempt to serve warrants on a subject known to be at the home.

Sheriff Waters stated he and Deputies Alex Jones, Derek Dennis, along with Constable Bill Hayes, Fish and Wildlife Officer Chris King and Kentucky State Police Trooper Harrison Wells went to the residence around 7:15 p.m. and spotted Danny Lee Ball, 37, who had three outstanding warrants against him, attempting to leave the home by the back door. Ball reportedly spotted the officers and fled back in to the home.

The owner of the residence allowed the officers to enter and take Ball in to custody. While they were there they spotted a soda bottle with drug residue and the home owner consented to a search of the entire residence.

Officers found over 8 ounces of marijuana, and 7 grams of methamphetamine (both potential felony offenses) as well as several unknown pills that will be sent to the crime lab for identification. Also found were various drug-related items, such as scales, needles and pipes.

The next evening the Sheriff’s Department made another drug-related arrest in Pine Knot.

Sheriff Waters stated a female subject, identified as Charlene Doran, 56, sold a baggie of a crystal-like substance to a confidential informant, who paid for the transaction with a marked $20 bill.

After the sale deputies approached the residence on Airport Road when Doran ran through the trailer and attempted to escape via a hole cut in the floor of a closet. Doran reportedly hid underneath the trailer, ignoring commands to come out. Doran eventually did surrender and was placed under arrest.

A search warrant was obtained and officers found a bag with brown powder residue – suspected to be heroin, as well as a pipe with white residue, several baggies, a scale and a sawed off shotgun.

All six subjects were lodged in the Leslie County Detention Center.