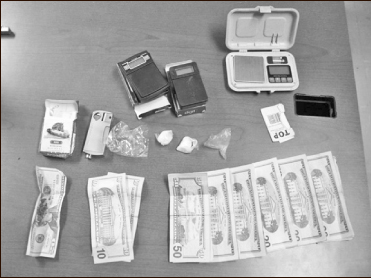 Two individuals were charged with trafficking after officers discovered meth and marijuana while attempting to serve a warrant in Pine Knot Sunday morning.

Sheriff Waters reports Deputy Alex Jones, Forest Service Officer Tim Grooms and Kentucky State Police Trooper Keton Bray had went to the residence on Airport Road to serve an indictment warrant against Garland, where he was located in the bedroom in the bed with Ward. Ward reportedly reached for a pack of cigarettes, which when searched, revealed two bags containing 7.1 grams of a crystal substance, believed to be methamphetamine. Garland was found to have a $20 bill with marijuana rolled up in his pocket.

After receiving consent to search the home and Garland’s vehicle, Forest Service Officer Tim Grooms’ K9 officer conducted a walk around of Garland’s vehicle, and detected the presence of narcotics. A search of the truck revealed drug paraphernalia. In the room where the couple was staying officers found scales, $640 dollars and a box containing marijuana.