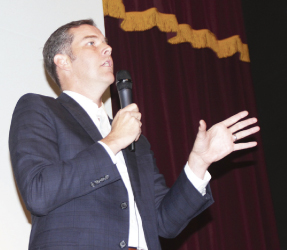 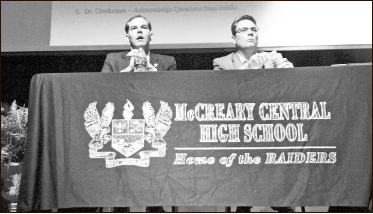 Senator Max Wise and Representative Ken Upchurch stated they both have “concerns” with Governor Matt Bevin’s proposal to fix the ailing state pension program as they met with constituents in McCreary County Monday night during a Town Hall meeting on the topic at McCreary Central High School.

With about 150 teachers and other public employees in attendance, the two legislators said they could not support the bill presented by Governor Bevin last week in its current form, and outlined their issues with certain aspects of the bill.

The legislators held the public forum in an attempt to give those who would be potentially affected by pension reform an opportunity to share their thoughts and input as the process moves forward.

Senator Wise, a first-term legislator and a former college professor, said he understood the public’s concerns with the current proposal and had issues with the bill as it currently stands as well.

Wise said he flatly opposed language in the bill calling for the capping of sick days, a stipulation that employees would be required to pay an additional three percent of their salary in to a retirement health systems, and a provision calling for pension payments to be suspended if a retiree works more than 100 days in a fiscal year.

Upchurch agreed with Wise’s assessment of those issues of concern and added he supported a provision that would put Legislator’s pensions in the same pool as other public employees.

“Keeping the Promise” – the pension reform bill released by the Governor last week calls for many changes to public employee retirement options for new hires, and also alters significant details of the system in place for current employees and retirees.

With much public outcry over some of the details, in addition to the upheaval in the Kentucky House of Representatives concerning the stepping down of Speaker Jeff Hoover, the Governor’s plan to call a special session to deal with the pension plan may have stalled for now, giving the legislator’s more time to seek out alternatives to portions of the bill.

Many aspects of Governor Bevin’s 502-page bill have drawn strong opposition –primarily from teachers, as well as rhetoric used calling opponents “unsophisticated” has cast doubt on the ability for the Governor’s plan to remain unchanged when, and if, a special session is called to work on the legislation.

Upchurch stated the Governor has the right to call a special session to consider the proposal, but the Legislature has the right to accept or reject the bill, and to make changes and amendments.

Both lawmakers admitted that the current pension system is in desperate need of reform, and no solution would please everyone as tough decisions will have to be made along the line. But, they both conceded, something has to be done now, rather than continuing to ignore the issue.

“We have to come to a common ground,” Wise said. “I think we all agree it needs fixing. It affects the whole Commonwealth. If we do nothing we could be facing an 18 to 20 percent budget cut across the board.”

“We can’t just pass it down,” he continued. “We need to make a sensible and fair agreement to what pension reform is going to look like.”

His colleague from the other side of the Legislature agreed that changes needed to be made to save the pension program, but could not support the proposal without making significant alterations to some of the aspects of the bill.

“We won’t get 100 percent agreement on whatever we pass,” Upchurch added. “But we know that 100 percent of what the Governor proposed is unacceptable. We are committed to solving this problem.”

Upchurch further stated that he believed there are not enough votes in the House to pass the bill as it stands, even with a Republican majority, which further emphasized the need for discussion from all involved parties to reach a solution.

After the opening statements the floor was opened to the public to share their thoughts on the proposed bill and offer comments.

One of the first questions came from Hope Daugherty, who asked if legalizing recreational marijuana in Kentucky and using that revenue could be an option.

Both legislators stated they were opposed to recreational usage laws, particularly with Kentucky’s looming drug epidemic. Wise did say he may be open to consider legalizing some form of medical marijuana – but for only terminal patients.

John King questioned the legality of any possible reduction in pensions, noting the “inviolable contract” outlined in KRS statutes. Wise and Upchurch acknowledged there are questions pertaining to that statute that still need to be answered.

Chad Starett voiced his displeasure that the responsibility of the unfunded pension program seems to be falling back on the employees, who have “done their part” in paying in their salaries.

Upchurch refuted rumors that the estimated $40 to $70 million shortfall in the pension program was due to a lack of action from the legislature. He noted that a study showed more than half of the deficit came from poor investments and inaccurate calculations from the board that manages the trust.

He pointed out that the state government did borrow money from the fund at one time, but that balance was paid back with interest – which produced a higher return than the investments provided at that time.

Upchurch further elaborated that the legislature always met its statutorily required funding every year, but often did not provide full funding to cover the actuarially required contribution – basically a catch-up payment to cover the costs for retirees currently drawing money from the pension fund.

Bill Boyd asked about the cost of the proposed bill, noting it was hard to fully comprehend the issue without knowing the dollar figure behind the changes.

Senator Wise whole heartedly agreed with the statement, noting both chambers of the legislature were waiting for the Governor to provide the cost, something he had promised when releasing the plan.

Jonathan Bowman, a 29-year old new teacher, asked why new teachers would be required to have their pensions tied up in a 401(a), with a board deciding how the money was invested.

“The money I’m paying in right now pays someone else’s retirement,” Bowman said. “In 27 years, where is my money coming from?”

Representative Upchurch stated new teachers, under the plan, would have a “great deal of control” how their money is invested. He said it would be very similar to a 401(k) where employees would have options on risk levels and percentage of their account to be invested.

Upchurch also said the idea was to have funding secured for the pension program going forward in future budgets.
Both legislators noted that an alternative proposal had been submitted by a coalition of Kentucky education groups that day, but neither had time to look at the details, but assured the audience that that proposal, as well as comments and suggestions from citizens such as those in attendance that evening, would be taken in to consideration as the legislative process moves forward.

Another concern voiced from the audience was a provision in the Governor’s bill that would freeze cost of living adjustments for five years. Upchurch assured the crowd that the House of Representatives would not go along with such a freeze.

At the close of the two-hour meeting both representatives assured their constituents that their concerns have been heard and understood and promised to deliver pension reform that will not only solve the funding issues over time, but also preserve the implied promise to all employees that their retirement will be there when the time comes.

“We have heard you loud and clear,” Wise commented.

“Our intent, at the end of the day, is you will have a pension system you can rely on,” Upchurch said. “We are committed to solving this problem”