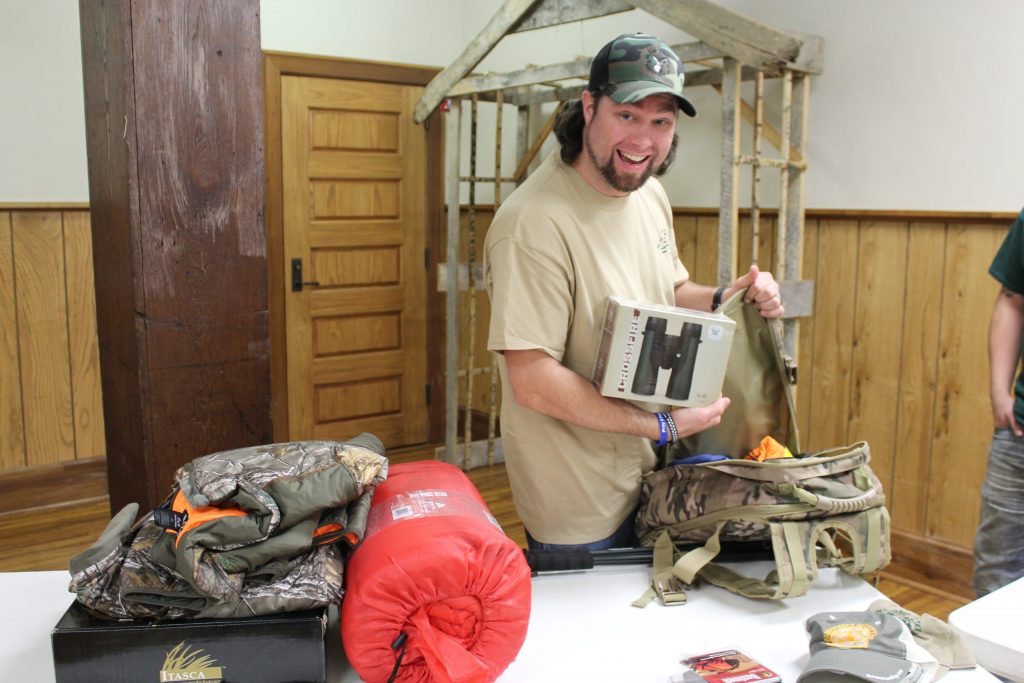 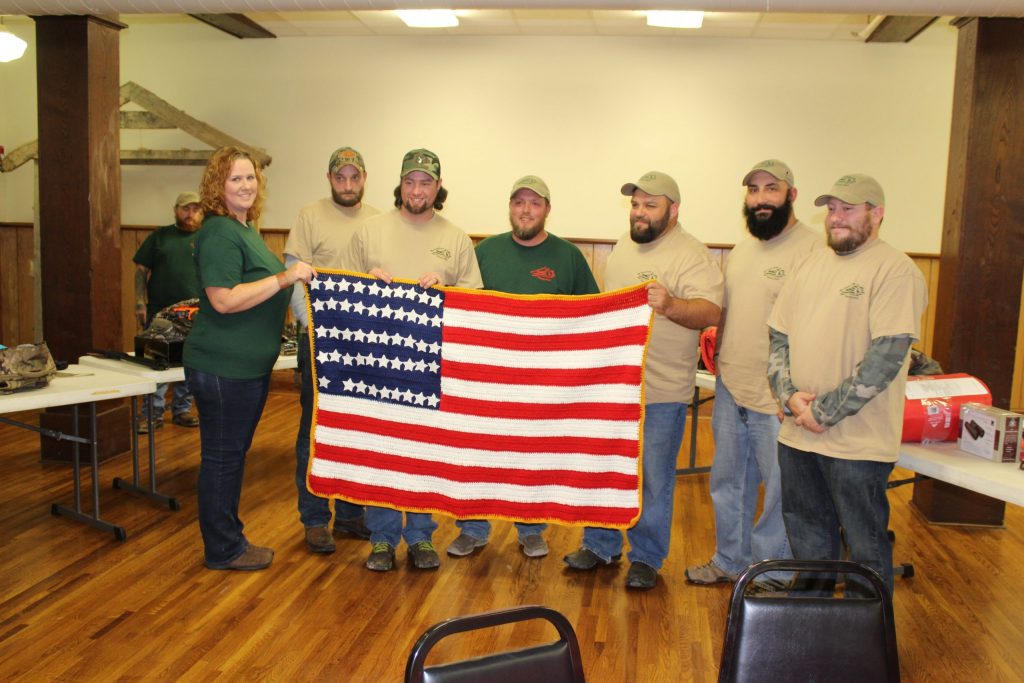 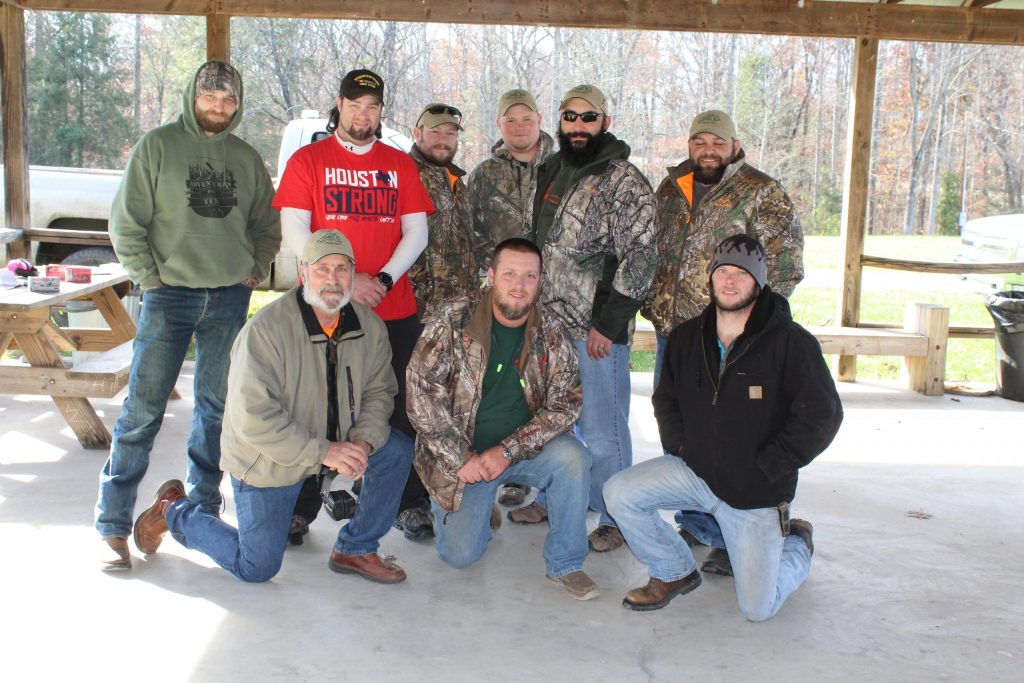 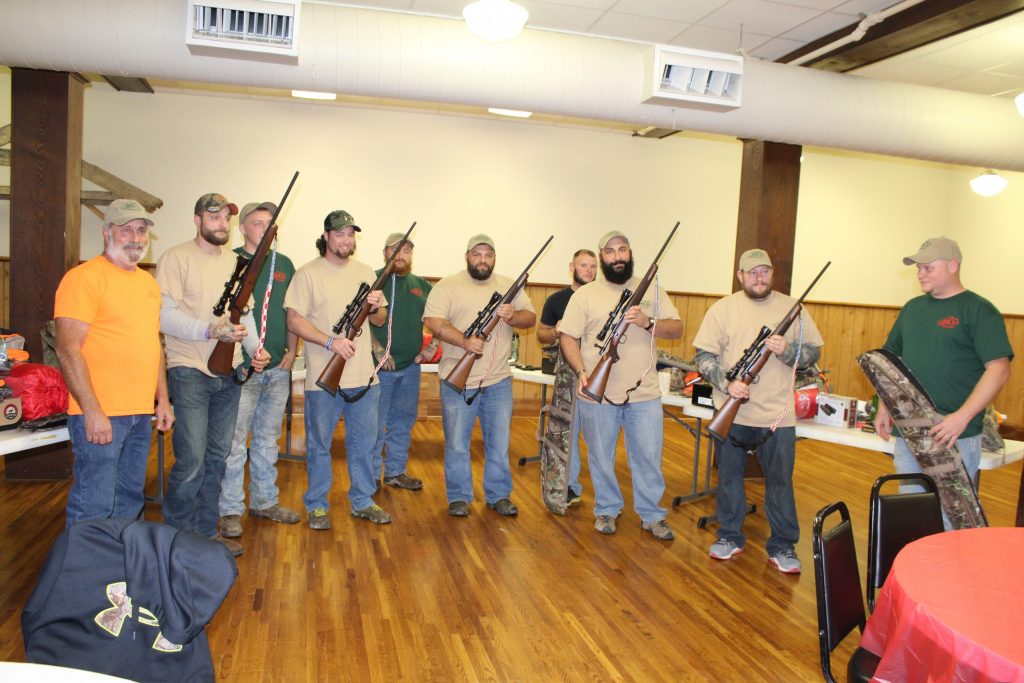 Photos by Eugenia Jones The inaugural Big South Fork Veteran Hunt saw five combat veterans from Texas and Pennsylvania arrive in McCreary County for an all expenses paid deer hunt. The hunters were excited and surprised to receive all new hunting gear and rifles. Hunting on private property in the County, two of the hunters harvested deer.

Five United States combat veterans from Pennsylvania and Texas were greeted with a standing ovation as they walked through the door of the Community Center in Stearns shortly after arriving in McCreary County for the first annual Big South Fork Veterans Hunt (BSFVH).

The hunt, established and organized by McCreary County resident Ricky Allen, is dedicated to bringing combat veterans to some of McCreary County’s private land in the Big South Fork area to hunt and fish with a special emphasis on helping our nation’s veterans cope with post-traumatic stress syndrome (PTSD) and traumatic brain injury (TBI). Allen began his efforts to establish the hunt after going on veteran hunts in other parts of the country and seeing for himself how beneficial the hunts can be for combat veterans. Allen, a twenty-one year KY National Guard veteran who served in Iraq, wanted his home county to play a role in helping those who have served in the military.

“We’ve got all this land in McCreary County,” Allen remarked. “To me, it just seemed natural to help our veterans by bringing them here to hunt and fish.”

Allen, with the help of his wife, Wendy, and other volunteers, has worked tirelessly for months to organize the hunt. Stressing no donation was too small, Allen accepted donations in various forms including money, land to hunt on,

manpower, and even lumber to build hunting blinds. Fundraisers included t-shirt sales, motorcycle rides, cruise-ins, and raffles. His year-long effort culminated on Veteran’s Day weekend when three Army veterans from Texas and two from Pennsylvania hunted on some of McCreary County’s most beautiful private land. All expenses were paid for the veterans including travel, lodging, and food as well as hunting licenses, tags, new camouflage with boots, and other hunting essentials. The veterans were especially surprised and excited when Allen presented each of them with their very own walnut stocked Mossberg Patriot 308 caliber rifle equipped with dead ringer scope with custom made American flag sling. Each veteran also received American flag blankets hand-knitted by Charlotte Gibson Beatty of Parkers Lake. The five veterans who participated were chosen randomly from across the nation.

Those participating in this year’s hunt were Dale Chritchlaw (US Army), Joe Wesner (US Army), Stephen Wright (US Army), Cory Strouth (US Army), and Jeremy Visbal (US Army).

Allen recognized the Girl Scouts for their help at the Veterans Hunt Dinner as well as Jonathan Jones and Eric Branscum for their work in preparing sites for the hunt. Guides for the veterans during the hunt included Craig Culbreth, Brownsville, KY, Shawn Wolf and Robbie Hopkins of Somerset, KY, and McCreary County’s Eric Branscum and Houston Hembree. Buddy Wilson, David Ross, and Joe Worley allowed the veterans to hunt on their property during the event.

The veterans, including two Purple Heart recipients, expressed their appreciation of the hunt both verbally and in surveys they completed after the hunt. The five participants highly recommended other veterans apply for next year’s event.

“I loved it,” exclaimed Veteran Joe Wesner from Pennsylvania. “I’ve done different trips before with different organizations so I know this hunt has gone above and beyond-especially for the first year. I do a similar thing in Pennsylvania except we send veterans to other places to hunt. I know what it takes to plan and organize an event like this. I don’t have the words to say how amazing this hunt is.”

With the success of the first BSFVH, Allen is optimistic more local businesses, organizations, and individuals will get involved in helping with the project.

Allen’s future plans include bringing a group of veterans to the Big South Fork for camping and kayaking as well as bringing a second group for a fishing expedition. He is already planning next year’s deer hunt.

“The hardest part has been getting sponsorships and community support,” Allen said. “Now that the first hunt has been a success and people see that one hundred percent of the money goes to help these veterans, I hope we will have more local support for additional events and for next year’s hunt.”

With twenty-two U. S. Veteran suicides per day, Allen sees the importance of veterans having the opportunity to be with others who share similar experiences and emotions.

“If the BSFVH can make a difference in the life of just one veteran, we’ve done our job,” Allen declared.