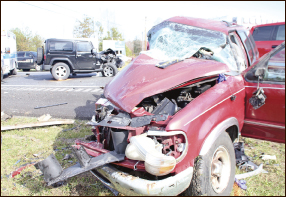 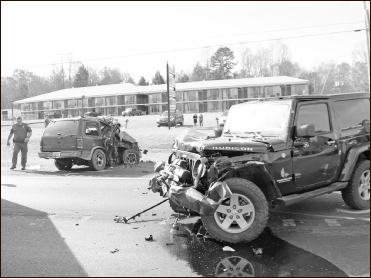 Photo by Greg Bird Traffic on US 27 was blocked for several hours Friday after a fatal collision in front of the Parkland Motel.

A McCreary County woman died Friday as a result of a two-vehicle collision on U.S. 27 in Stearns Friday afternoon.
Officials reviewed security camera footage and state it appears Josie Gosnell, 69, was traveling northbound in 1997 Ford Explorer around 12:35 p.m. when she came upon a vehicle stopping to turn in to the Parkland Motel and swerved to avoid a rear-end collision. Gosnell apparently turned in to the path of a 2012 Jeep Rubicon, driven by Christopher Winchester, 47, of Irvine.
Winchester’s vehicle struck Gosnell in the front-passenger side, causing both vehicles to spin.
The McCreary County Ambulance Service transported Gosnell to the Big South Fork Medical Center in Oneida, where she was later pronounced dead.
Winchester was also transported to the Scott County facility for treatment of chest and wrist injuries.
The McCreary County Sheriff’s Department is conducting the investigation. Members of the Whitley City Fire Department assisted at the scene.