To Slay a Monster… 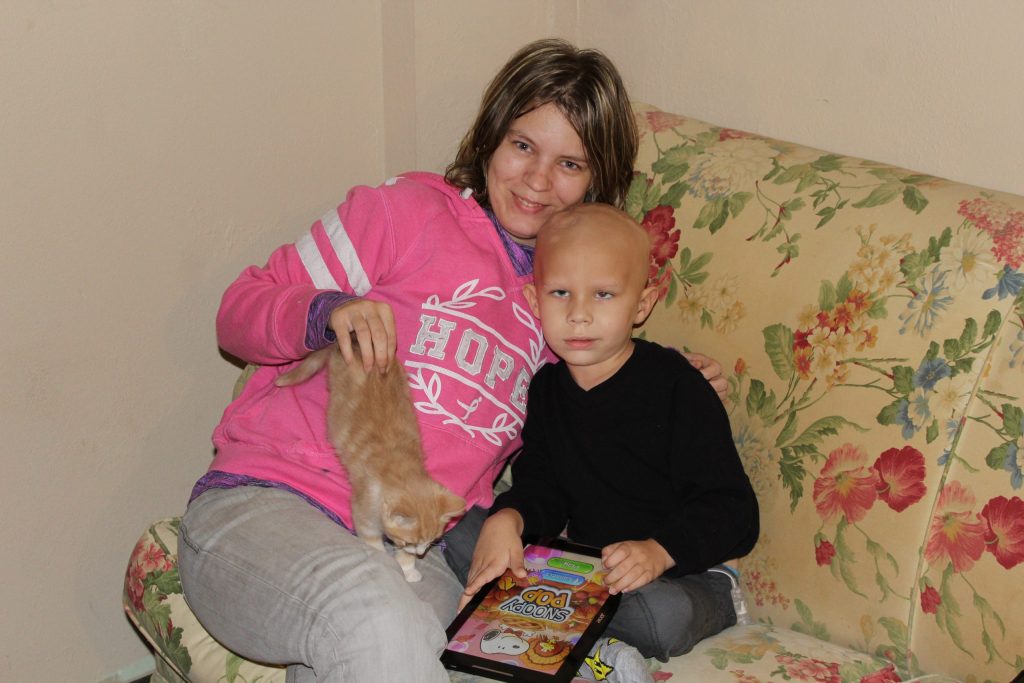 Despite facing additional chemotherapy beginning in December, four year old Alex stays in good spirits by playing with his kitten and enjoying his tablet. 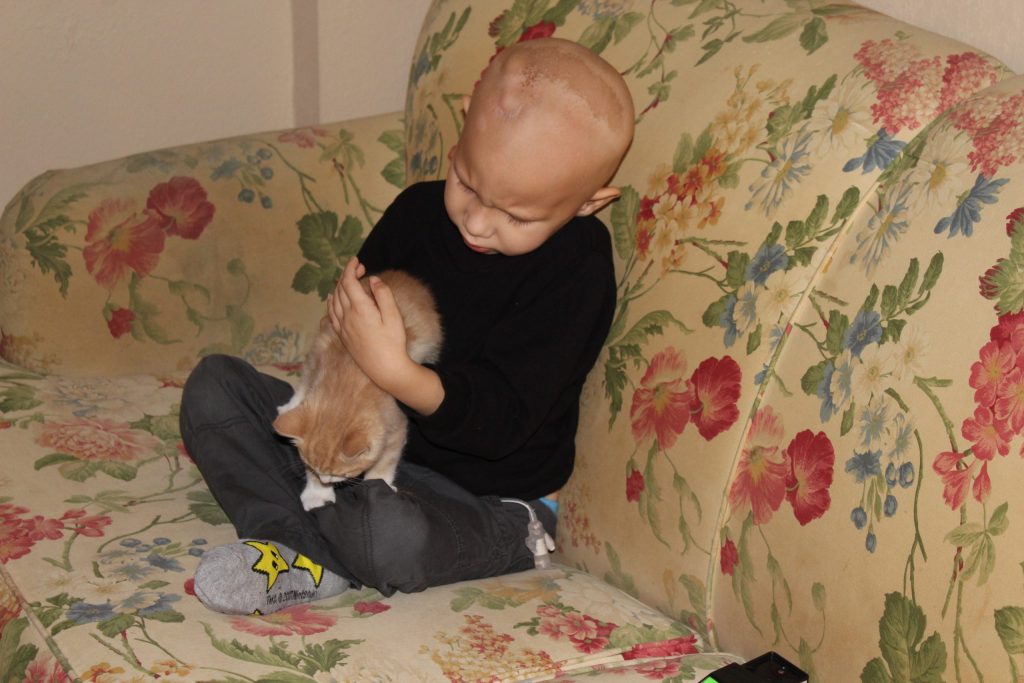 For a pale, little boy named Alex, the medical term ‘medulloblastoma’ is simply a big word defining the “monster that bit his head.”
For his stepfather and mother, John and Brandy Teeters, it is the big word defining the cancerous tumor that began in the region of the brain at the base of their child’s skull-a big word that triggered a nightmare of concern and exhaustion in seeking treatment and care to save the life of their child.
For physicians, it is the big word that names the malignant brain tumor accounting for approximately twenty percent of pediatric brain tumors.
Four year old Alex Lawson of Whitley City hadn’t been feeling well for a while. Falling and unable to hold on to things, he struggled with episodes of vomiting. Eventually, his eye began turning inward. Having sought help from medical doctors, Brandy and John grew more and more concerned as Alex’s symptoms failed to improve.
Finally, Alex was taken to his stepfather’s own medical doctor who immediately sent Alex to the emergency room in Corbin for a cat scan. Once at the emergency room, John and Brandy quickly learned the diagnosis.
“It was probably about twenty minutes after the scan when the doctor and a lot of nurses came back in our room,” Brandy recalled. “The doctor turned off the television and said he had bad news. My husband told the doctor he knew it wasn’t good when the television went off. When the physician told us it was a 2 inch brain tumor, John and I both broke down.”
Reeling with shock from the doctor’s life altering announcement, Brandy couldn’t help but be touched by the kindness of the emergency room nurses. One pulled her aside and asked if the family had enough funds to stay with Alex through treatment.
“I thought maybe she meant a couple of weeks,” Brandy shared. “But she told me it would be so much longer than that. Within an hour, several of the nurses came back with over $1,200 they collected right there. They treated us like family.”
While John went back home to collect some belongings, Alex was immediately taken by ambulance from Corbin to Children’s Hospital in Cincinnati.
When the four year old arrived in Cincinnati, doctors swiftly began work. First, they placed a drain in Alex’s skull. The following morning, he was wheeled to the operating room for approximately twelve hours of surgery. Upon seeing Alex after surgery, Brandy remembers her son’s eyes were swollen shut. It took three days before Alex could open his eyes.
The twenty-six year old mother still remembers her son’s plaintive cry in the hospital the night following surgery.
“Don’t leave me alone,” Alex pined. “”The monster bit the back of my head.”
After surgery, Alex began proton treatment-one of the newest treatments available. Undergoing, thirty days of chemotherapy and thirty-one days of radiation, Alex was courageous throughout the treatment. He passed the time by playing with toys and making friends with nurses and others at the treatment center. Entering the hospital in mid-August, Alex did not return home until October 31.
“To this day, I have not accepted that it is cancer,” Brandy said quietly. “You never think it is going to be your child. The day I found out he had the tumor, I felt like he was being ripped away from me.”
Home now, with a shunt in his head and a feeding tube in his stomach, Alex faces a tough battle. In December, he will begin traveling to Cincinnati to undergo more chemotherapy treatments spread out over a six month period of time. His progress will be monitored for several years. The doctors and Alex’s family are hopeful Alex will be a survivor.
Despite his illness, Alex is a typical little boy. He loves his kitten named Tiger and enjoys playing with his video games and his tablet. He is a fan of Rescue Bots and Batman. He dreams of having a train set and a video game playroom complete with Legend of Zelda and Pokemon. When he grows up, he’d like to be a police officer to help other people.
As is often the case with catastrophic health situations, finances are challenging. Travel expenses, household bills, and medical expenses quickly accumulate. With the Christmas season approaching, the Teeters want to make this holiday extra special and memorable for their child. Grateful for help they have received from some local churches, Brandy specifically mentions the Lighthouse Church for helping with home repairs and praying for the family. Acting on advice from one of Alex’s nurse, the Teeters have set up a gofundme Account on Facebook. The couple is also in contact with the pediatric cancer charity, Alex’s Lemonade Stand, for assistance. Anyone wishing to help Alex may contact the Teeters in person or through Facebook.