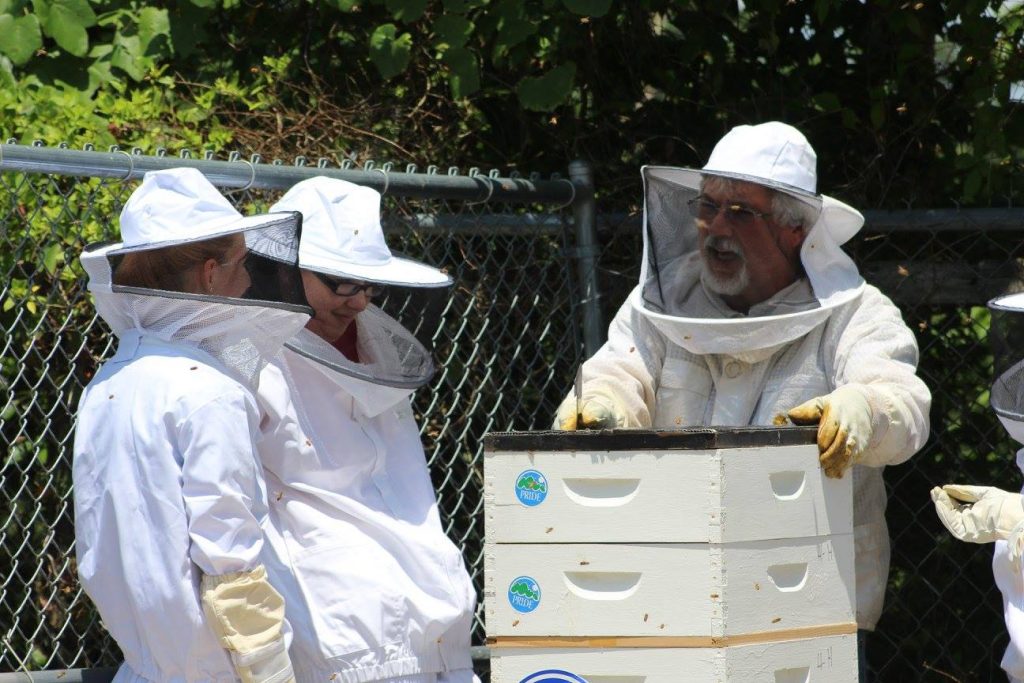 Photo by Eugenia Jones
Greg Whitis (right), shown here demonstrating bee keeping to students, met with media representatives this week to provide more information concerning the reasons behind the Extension Service tax as the Fiscal Court ponders dissolving the Board.

With the possibility of the McCreary County Fiscal Court taking action to disband the local Extension Board and ending a tax, McCreary County Extension Agent Greg Whitis is fighting to rally support for his agency.

Whitis, along with fellow Agent Amy Fugate and Extension Board Chair Pam Gibson, met with local media representatives Monday to provide more information concerning the Board’s decision to adopt a tax and the reasons why they set the amount as high as they did.

In September the Board notified the Fiscal Court their intention to establish a tax of 3.95 cents per $100 of assessed property. As the Board is a Special Purpose Government Entity, and thus legally authorized to operate a special taxing district, there was little the Fiscal Court thought they could do at the time to prevent the tax from being implemented.

McCreary County PVA Bruce Lominac did obtain a legal injunction in an attempt to block the tax, and give the Fiscal Court an opportunity to dissolve the Board and stop the tax from being added to the County’s tax bills.

The Fiscal Court, acting on the advice from County Attorney Conley Chaney, stated they believed they had no just cause to eliminate their Board and were powerless to prevent the tax.

Since then Magistrate Roger Phillips, who claimed he was “blindsided” by the amount the Extension Board set the tax, stated he has learned the Fiscal Court does have an option to take action and prevent the tax from being repeated next year.

Magistrate Phillips stated in last month’s Fiscal Court meeting that he intended to begin the process of eliminating the Board, which would dissolve the taxing district.

According to Kentucky Revised Statute 65A.050 the Fiscal Court does have the option to dissolve the Board by adopting a new ordinance with a two thirds majority vote, but the governing body also must hold a public hearing on the issue and present a plan as to how the Fiscal Court would continue to provide necessary services that were previously provided by the dissolved Board.

Phillips’ declaration has prompted the Extension Service to speak more about their decision to create a tax and demonstrate why the money is needed.

During Monday’s informal meeting with media representatives Whitis said any actions by the Fiscal Court to dissolve the Extension Board would jeopardize the very existence of the Extension Service.

“If a county chooses to end all funding or only provide an inadequate funding to have a local County Cooperative Extension Service, it is probable that the doors will close and not reopen until there is a secure source of funding reestablished from county funding,” Whitis wrote in a newsletter distributed this week.

On Monday Whitis expanded on that idea, noting that the University of Kentucky, which oversees the Extension Services in all 120 counties in the Commonwealth, could choose to simply close the local service, or severely restrict staffing and thusly limit what services the office could provide.

It was noted that the Extension Board had decided to implement the tax last February based on a notification from Judge Executive Doug Stephens that the Fiscal Court would not be able to continue funding the service out of the county’s General Fund due to a lack of revenue. Additional concerns of a decrease in federal and state funds compounded the issue.

In the past the Fiscal Court had allocated upwards of $50,000 annually for the service, which had primarily went toward funding the salaries of support staff and paying rent to the Somerset Community College for the office space. The remainder of the budget, about $3,000, was used to purchase supplies and pay utilities.

That total budget, Whitis said, was one of the smallest for any Extension District in Kentucky, and severely limited what services and programs offered locally. He explained several potential grant opportunities were missed out on due to a lack of matching funds, and other services were limited, or relied on participants paying a fee to cover some of the costs.

He stated the University of Kentucky charges the local office for some of the services performed, and the local Board covers some of that cost not covered by fees out of the district’s budget.

When the Board was informed about the loss of funding in February, they discussed the need to procure another source of revenue to ensure the continuation of the Extension Service.

The Extension Board, a group of seven members designed to oversee the financial aspect of the local Extension Service, was created in August 2015 by action of the McCreary County Fiscal Court. That move, in effect, established it as a Special Purpose Government Entity, meaning it did have the authority to create a tax.

Whitis said there was no intention to do so when the Board was first created, in fact, he said, the Board members were under the impression the Fiscal Court only had that ability.

But, after getting clarification from the University of Kentucky Extension Service and the County Attorney that they did indeed have the power to enact a tax, the Board voted unanimously to adopt one this year after being presented with the probability of losing funding from the County.

Other factors behind the decision included increasing costs, and declines in funding from federal and state sources as well.
Whitis said he had spoken to two magistrates about the possibility of imposing a tax prior to the February meeting and was told to “go for it.” He refused to identify either of the two officials so the Voice was unable to independently verify this claim.
While the decision wasn’t easy for the Board, Chairman Pam Gibson said Monday they felt it was the only choice they had to keep the Extension Service operating.
“They (the Board) met for four hours that night,” Whitis added. “It was not an easy decision for any of them.” There are seven Board members, and neither Whitis nor Fugate are a member and do not have a vote. Judge Executive Doug Stephens is also a member, but he states he is a non-voting member.
With the decision made to enact a tax, the next question was what rate to set. Discussion turned to what needs the service had, and how much it would cost to cover those expenses.
The Board could have opted to levy a tax of about 1 cent per $100, which would raise about $50,000 – the amount they had been receiving from the county, but they identified several areas where improvements could be made and chose to set the tax rate high enough to cover all those costs.
An estimated $193,000 would be generated through the tax, nearly quadrupling the service’s budget.
Whitis provided a more detailed breakdown of where the additional $140,000 in revenues would be spent. The list included $12,000 for professional development, an item not included in previous budgets due to cost and an increase of about $3,000 for travel expenses to attend conferences and trainings.
He cited a need to upgrade an inadequate phone system, outdated computers, a new copier and other electronic devices as much needed equipment for the office. Another $4,000 has been earmarked for insurance. Whitis said the District Board does not hold insurance for any equipment, volunteers or activities – a potential liability
The largest sum, $48,912, was marked as reserve in the latest budget. Whitis explained that money is set aside to hire a 4-H Agent, as requested by the Extension Council. The current Extension Service has Whitis operating as an Agricultural and Natural Resources agent and Fugate as a Family and Consumer Service agent, and both also serve as a 4-H Youth Development agent as an added duty. The State Extension Council identified the need for a full-time 4-H agent locally and suggested adding a third agent to the office. Both Whitis’ and Fugate’s salary are paid through the University, but the third agent would have to be funded by the local Board.
Whitis also presented a lengthy list of all programs, classes and services offered through the local Extension Office, noting that those items could be in jeopardy if the office was closed.
Notable programs and partnerships on the list include the McCreary County Hiking Club, Grow Appalachia, the Farmers Market, soil testing, Tobacco Cost Share Program, Master Logger Continuing Education, Kathy Brannon Craft Days, nutrition lessons.
Additionally, 4-H activities and programs, including the annual camp, state and county fair projects, Bee Club, McCreary County High School Leadership, McCreary County Explorers, the Environmental Camp at McCreary Middle School and the annual bird house lesson at elementary schools, could also be affected by any cuts.
Whitis said any mandated services, such as continuing education for master loggers and beef quality assurance certifications would no longer be available locally and would have to be obtained elsewhere.

Gibson was asked if the Board would consider some sort of compromise with the Fiscal Court, such as lowering their tax rate for the coming years, along with a possible promise from the Fiscal Court to include some funding in the county budget every year.
The Board Chair said that would be a discussion for the Board, but unlikely as there is no promise that the county funding would be available.
“We know it would be a struggle every year,” she said.