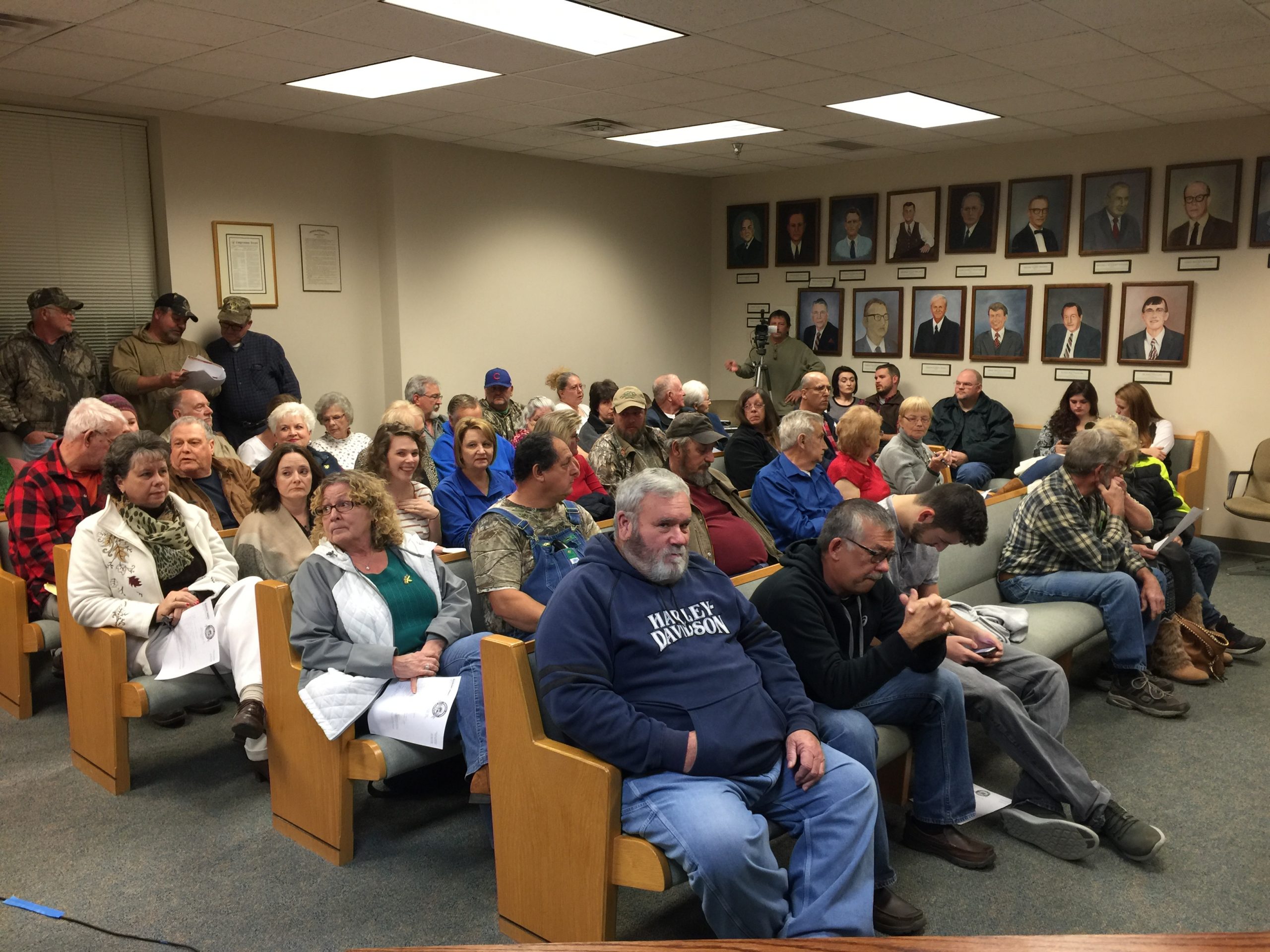 Photo by Greg Bird
A packed house greeted the Fiscal Court Thursday night as citizens raised concerns over the new garbage service, while others were there in support of the McCreary County Extension Board.

A vocal group of McCreary County citizens had some pointed questions and comments for the Fiscal Court regarding the upcoming change in garbage service providers at the start of the new year.
Apparently spurred by recent mass-mailing and advertisement by Poff Carting detailing the new service and providing information on how to sign up for weekly pick up, many in attendance questioned the “mandatory” aspect of the service and voiced their displeasure at being required to participate in the program.
Citizens appeared to be concerned about the inclusion of a letter from County Attorney Conley Chaney to the Judge Executive stating his interpretation of the ordinance, namely the potential penalties for anyone found in violation of the law.
The letter states in part: “Violations of the ordinance would be punishable by up to $500 in fines, per conviction, plus court costs.”
It should be noted that in previous discussions of the enforcement of the ordinance, the County Attorney has stated that he would be willing to forego any fines if someone who was charged with the offense agreed to sign up for garbage service.
Additionally, while violation of the ordinance would be considered a Class A misdemeanor, the maximum penalty that could be assessed would be $500, but could be considerably less.
Judge Executive Doug Stephens pointed out that garbage service is a mandate from the state that each county government has to provide for its citizens. Additionally, “mandatory” participation has been technically in effect since the first garbage ordinance was drafted under Judge Jimmie Greene, but there had been little to no effort at the county level to enforce the law.
Stephens noted that the new garbage service provider – Poff Carting, as well as the old – Scott Solid Waste, were businesses and would not have submitted bids on providing service to the county if they were not able to at least break even on costs.
There are provisions in the contract with Poff Carting detailing the amount of franchise fees the company would pay to the County based on participation rates. If participation falls below 4,200 customers Poff would not be required to pay any fees.
That information did little to quell the discontent in the room as some individuals stated it violated their rights as citizens to be mandated to use the service.
“They provide a service,” one citizen said. “I, as a consumer, should not be forced to pay for something I do not want or use.”
Citizen Tiffany Spradlin asked why there was not a public vote on the garbage contract and noted many elderly residents were facing cuts in Medicaid payments soon and would be forced to cut necessary expenses such as food or heat to afford paying for garbage.
Judge Executive Doug Stephens pointed out the Fiscal Court was elected to be representatives of the citizens of McCreary County and charged with overseeing the day-to-day operations of the county, such as creating ordinances and awarding contracts. Citizens do have an opportunity to comment on new ordinances as a public hearing is often required, but there was little to no public comment on the newest garbage ordinance when it was passed in September.
Others called for the continuation of the $1 a bag program, which had been offered over the past few years. That program allowed residents to bring their garbage directly to the Transfer Station in Stearns for a small fee, rather than subscribing for regular service.
Judge Stephens stated neither Poff Carting, nor Scott Solid Waste who held the previous contract, were willing to continue the service – noting the cost of maintaining the program was cost prohibitive.
He added that in the past year, since the County took over operations of the transfer station only about 300 people were taking advantage of the $1 a bag program. The program proved to be expensive and Judge Stephens said the County was losing about $3,000 per month in doing so, factoring in the costs of salary and hauling the garbage away.
There were also questions on the requirement that every household be signed up on the service.
Magistrate Leroy “O.L.” Perry, who pointed out neither he nor Magistrate Roger Phillips voted for the ordinance, stated he owned pieces of property where there was no one living, but received the mailer from Poff Carting in the mail.
He asked if he would be required to pay for service at a property with no residence.
Todd Hopper, from Poff Carting, said there is no intention of charging for garbage service at properties with no households.
Additionally, he noted, special considerations can be made on residences that are only occupied for part of the year.
(Editor’s note: In the September 20 special called meeting of the McCreary County Fiscal Court both Magistrates Perry and Phillips voted in favor of awarding Poff Carting the contract, as well as both readings of the latest garbage ordinance this fall. They did vote against a version of the ordinance in December 2016 prior to agreeing to extend the contract with Scott Solid Waste for another 12 months.)
Another question addressed was recycling. Many in the audience complained that mandatory garbage collection would end local efforts to recycle, but under the new contract the County still retains rights to all recyclable materials and there should be no changes in the service.
All revenue from recycling goes directly back in to the Solid Waste Fund.