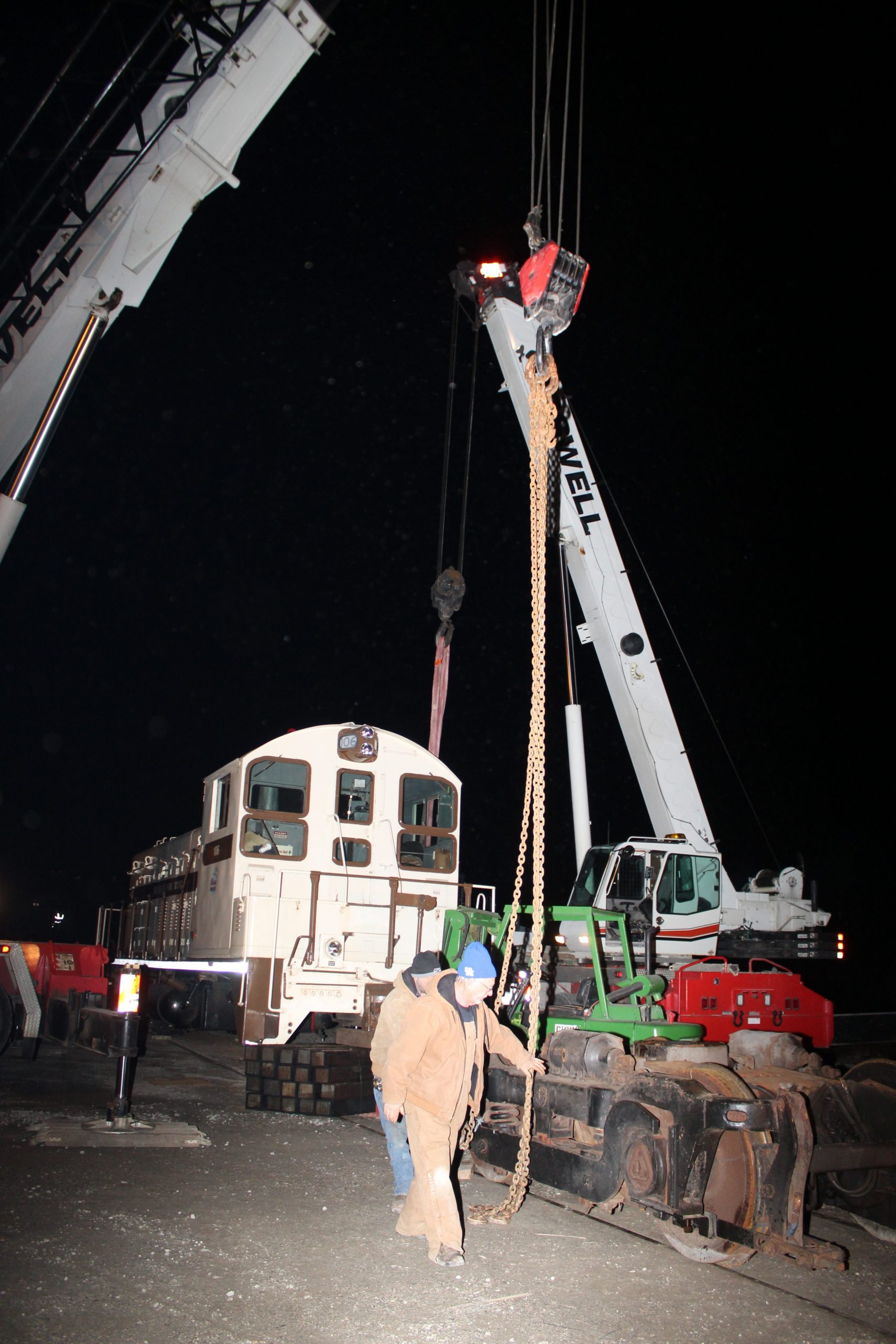 Photos by Eugenia Jones Cranes and crew from RJ Corman in Somerset and personnel and equipment from Knoxville hurried to Crossroads Railcar Service in Stearns after Saturday night’s locomotive malfunction forced the cancellation of four Polar Express runs at the Big South Fork Scenic Railway. Working late Saturday night and throughout Sunday, the Polar Express was once again ready to journey to the North Pole on Monday. Most passengers affected by the cancellations chose to rebook their Polar Express experiences for later this week.

With 120 passengers ready for departure on Saturday night’s 8:00 p.m. run of the Stearns Polar Express, it seemed the Grinch climbed aboard the train to try and steal a bit of Christmas cheer as a failed main drive wheel bearing forced the cancellation of the locomotive’s final run on Saturday and Sunday’s three scheduled trips to the North Pole. However, Santa’s helpers were quick to spring into action as they got the Polar Express back on track to the North Pole for Monday night’s 6:00 p.m. excursion.
According to Heritage Foundation President, JC Egnew, the train crew noticed an apparent problem with the locomotive’s drive wheel area as the 6:00 p.m. Polar Express train was making its return approach to the Depot. Upon arrival at the depot, an inspection revealed one of the main bearings on a drive wheel had failed. After further assessment, the 8:00 p.m. Saturday run and three Sunday runs were cancelled in the best interest of passenger safety.
Passengers planning to ride were naturally disappointed, however all were understanding of the situation. Approximately 700 passengers either rebooked or received refunds with nearly 2/3 of the guests rebooking their rides. The ticket staff notified passengers of the cancellations by phone and social media while Santa came in from the North Pole to spend Sunday, along with the Polar Express conductor, at the Depot greeting passengers who arrived unaware of the cancellations.
Working late into the night on Saturday and throughout Sunday, the Polar Express team had the required equipment, personnel, and replacement hardware in place at Crossroads Railcar Service in Stearns on Sunday. Working well into Sunday night, the necessary repairs to the locomotive were completed, and the holiday train was deemed once again ready to make nightly excursions during the final week of the Polar Express season.
“With the help of everyone from train crew to ticket office staff, we were able to turn a potentially catastrophic moment into one where the railroad only had to cancel four trains,” noted Polar Express Coordinator Lou Capwell. “Nearly everyone will still be able to enjoy the Polar Express at the BSFSRY. We’re ready to finish out the final week of the first Stearns Polar Express event strong, with more than seven thousand tickets already sold in less than three months.”