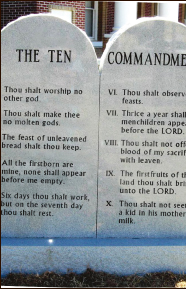 The year started on a positive note for the Fiscal Court as the long-standing debt over the 10 Commandments lawsuit was finally paid in full.
In all more than $193,000 of taxpayer money was used by the County to settle the lawyer bill for the failed Supreme Court argument.
It wasn’t long after that bad news begun as McCreary County was listed as the poorest county in the United States, according to a study by 24/7 Wall Street. For the past three years in a row McCreary had made the infamous list, but this was the first time it topped the rankings. 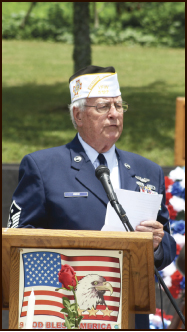 McCreary County lost one of its’ more popular figures as former County Judge Executive Jimmie W. Greene passed away at the age of 88. Greene, a retired Air Force Master Sergeant, served four terms of office as McCreary County’s top elected executive.
The McCreary County Ambulance Service and 911 continued to expand and improve throughout the year. In February the Enhanced 911 added to its range of capabilities, now accepting emergency calls via text. The two departments, under the direction of Jimmy Barnett obtained hundreds of thousands of dollars through grants to improve both 911 and Ambulance Service operations throughout the year.

Kentucky’s only official Polar Express rolls on at the Big South Fork Scenic Railway in Stearns with Santa, dancing chefs, elves, hot chocolate, and cookies. The event has already drawn several thousand riders and began making nightly runs to the North Pole this Past December. Magistrate Duston Baird is pictured above enjoying the ride with his family. Baird’s triplet daughters seemed to especially enjoy the hot chocolate and cookies.

It has also been an interesting year for the Big South Fork Railroad.
After a memorandum of agreement was in place between the McCreary County Heritage Foundation and DSRR LLC. to operate and purchase the BSFNRR, negotiations to complete the sale fell through in March. The prospective owners filled a lawsuit seeking the Court to either order the completion of the sale or compensation for work done while the MOA was in place.
But, out of ashes the rail line struck gold this past winter with the addition of the Polar Express ride, drawing more than 7,000 riders who wished to experience the Christmas Classic for themselves.

In April the Voice began a month-long series investigating the impact of drugs in McCreary County, detailing the cost narcotics play not only on families, but the economic and social toll as well. It was estimated that $30 million a year is lost from the local economy due to drug use.

May saw the passing of another well-known McCreary Countian as Medal of Honor Winner Wilburn K. Ross passed away at the age of 94 in Washington. The Strunk native earned his distinction in the United States Army, battling in France during World War II.
Embattled former McCreary Central teacher and Coach Toby Curry saw his conviction on improper contact with a minor charges voided and awarded a new trial after it was learned two former students served on a jury that judged him. The new trial, still pending an official start date, will take place in Whitley County due to media coverage of the case locally.

In June a volunteer Deputy with the McCreary County Sheriff’s Department initiated a massive manhunt after he reported he had been shot by an unknown assailant on June 24 while patrolling a remote area in the western end of the county.
After the intense search failed to turn up any leads as to the identity of the shooter, investigators began to examine Frankie Brown’s account of the incident and began to unravel the true story.
As the KSP conducted their investigation in to the matter, it was discovered that the ballistic evidence recovered, namely a bullet fragment lodged in the deputy’s vest, appeared that the shot came from the officer’s own gun. Additionally, the KSP reported that Brown’s injuries were not consistent with his story.
After first denying the allegations that he fabricated the story, Brown eventually agreed to a plea deal in August to misdemeanor charges of official misconduct and filing a false police report. Brown served a total of 30 days behind bars, as well as paying restitution to the Kentucky State Police for their resources spent on the search.