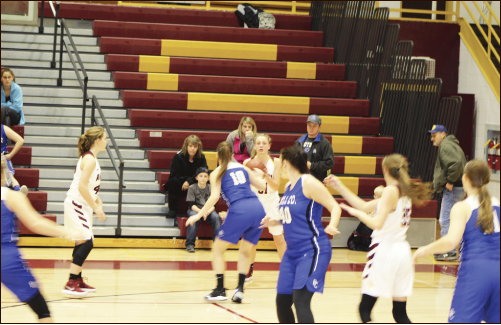 Southwestern improved to 12-3 overall and 1-0 in the district with the win.
McCreary Central had the tough task of facing a hot-shooting district rival. The Lady Raiders were forced to play from behind throughout the game.
Southwestern shot 54.9 percent (28-of-51) from the field. The Lady Warriors were 8-of-17 (47.1 percent) from 3-point range.
Southwestern was nearly automatic at the foul line, shooting 88.9 percent (8-of-9).
Controlling the backboards, Southwestern outrebounded McCreary Central 22-14.
A trio of Southwestern players reached double figures in the scoring column. Kennedy Harris led a balanced Southwestern offensive effort, scoring 11 points for the Lady Warriors.
Accompanying Harris in double figures for Southwestern, Kallie Sheron and Alexa Smiddy added 10 points apiece.
Aiding the Southwestern offensive attack, Kylie Foreman netted eight points and Regi Cundiff added seven points in the Lady Warriors’ victory.
McCreary Central shot 45.7 percent (16-of-35) from the field. The Lady Raiders were only 2-of-10 (20 percent) from 3-point range.