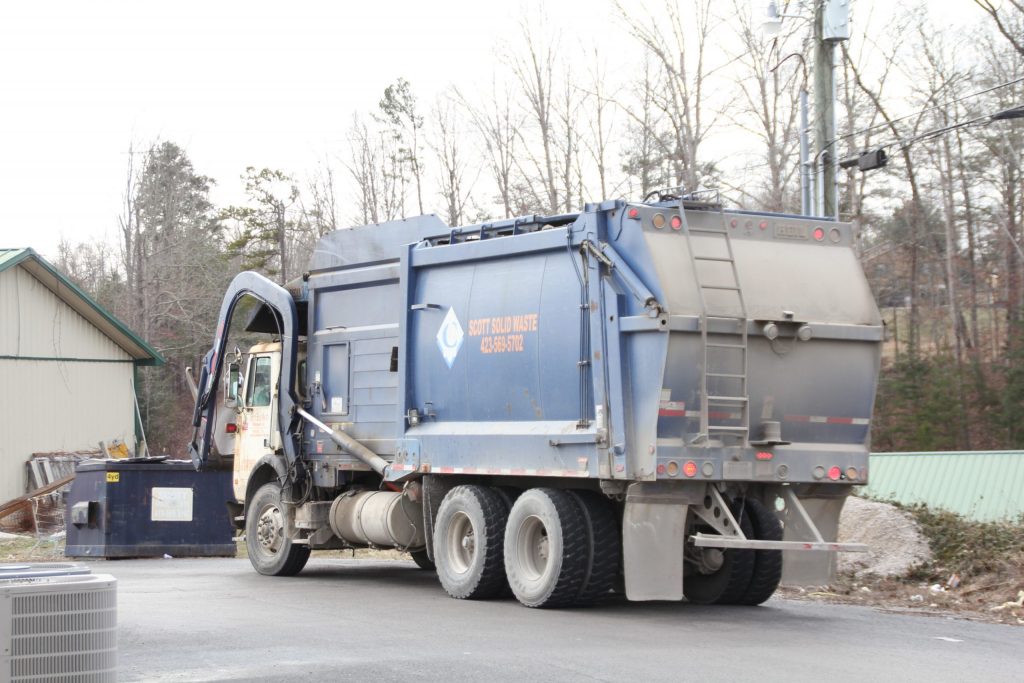 Photo by Greg Bird Bright red Poff Carting trucks can be seen collecting gaarbage, but the familiar blue Scott Solid Waste trucks are on the road as well. 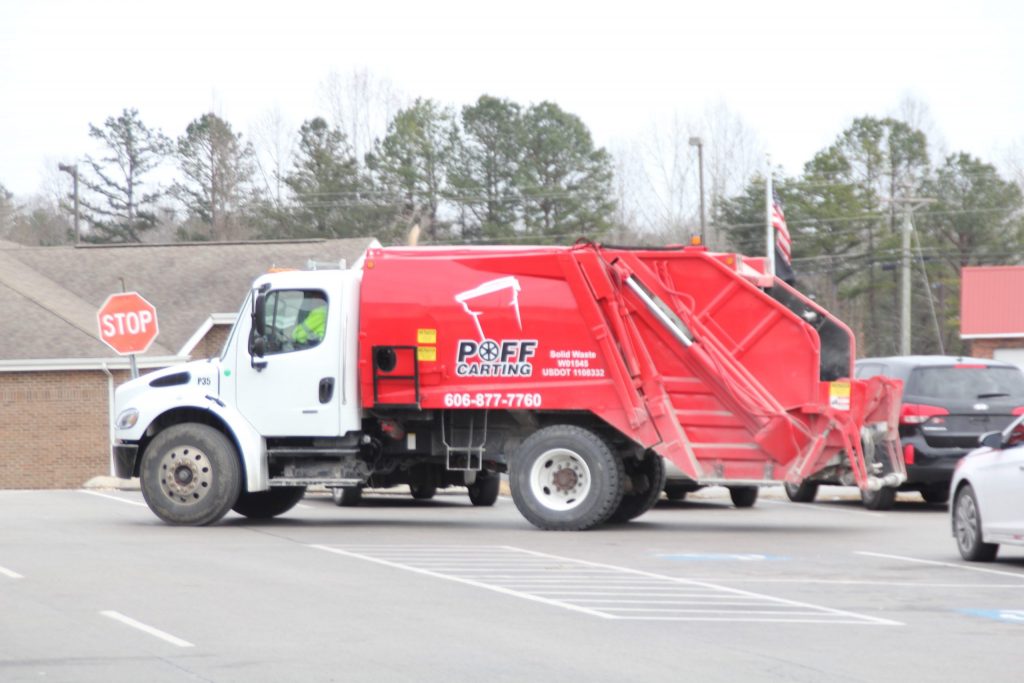 For the most part the changeover in McCreary County Garbage Service was uneventful and routine this past week as Poff Carting officially began providing garbage service in McCreary County as of January 1.
Though there were some issues with weather and missed pick ups, Poff Carting owner Todd Hopper said he felt his company’s first week in McCreary County was successful.
“All things considered, the first week went very well,” Hopper said. He noted the snow event of last week caused some customers to have a delay in their regular pickup, and there were some issues with drivers learning new routes, but said he was confident that those problems are resolved.
‘It will take us a little while to get used to the roads, but we think things have went smooth,” he said.
Hopper noted more than 400 new customers have enrolled for collection over the past month, and he expected more to do so in the coming weeks.
With about 3,400 customers signed up for the mandatory collection, Poff Carting is still below the threshold to pay a franchise fee to the County for operating the service.
Under the contract between McCreary County and Poff Carting, the company will not have to pay the fee to the County (which would go directly to the Solid Waste Fund and would not effect the General Fund.) According to the 2017-18 County Budget about $38,000 in franchise fees were expected to be collected. If more than 4,200 customers sign up for regular service, the company would have to pay a 5.5 percent fee of gross collection fees. A participation rate of more than 5,200 would increase that fee to 6.5 percent.
While the franchise fee does not effect the General Budget, it does impact areas concerning Solid Waste, such as recycling Judge Executive Doug Stephens noted.
McCreary Countians are already seeing the red Poff Carting trash vehicles on the road, but many are still seeing Scott Solid Waste trucks as well.
Hopper said his company has sub-contracted with Scott Solid Waste to continue collection service on all front-load commercial dumpsters, while Poff Carting handles all residential and other dumpster service in the county.
The decision to use Scott Solid Waste “made sense,” Hopper said. As SSW already had routes in operation and resources in place, the decision to contract with the previous garbage service provider wasn’t difficult.
“Systematically, it made for a much smoother transition and made sense for both us and them (SSW),” he said.
Hopper noted if Poff Carting took over that aspect of collection the company would have to replace the dumpsters commercial businesses already have, and that would have been cost prohibitive. Hopper added the move effects only about 170 customers, and Poff Carting is still ultimately in charge of the process.
“We are still responsible,” Hopper said. “But commercial customers with questions can contact Scott Solid Waste first. If there still issues that need to be addressed, they can call us.”
Hopper added those customers would still receive a bill from Scott Solid Waste for that service.
Poff Carting is currently operating the Stearns Transfer Station on Fridays only, from 8:00 a.m. until 4:00 p.m., but Hopper said the company will look at expanding operations if demand warrants it.

For information about service, bill payments or to sign up for service, customers can go to the Transfer Station on Fridays, visit the website at poffcarting.com or call (606)877-7760