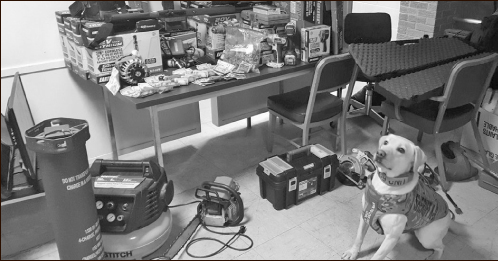 McCreary County Sheriff Randy Waters announced the arrest of William Hal Kennedy, 65, of Parkers Lake after an investigation led to the discovery of marijuana trafficking and illegal firearms.
According to the arrest citation officers conducted a search warrant at a residence off Highway 90 around 10:00 p.m. Friday night and located Kennedy in a back room with a 25-auto handgun. A further search of the premises turned up a .22 rifle in a locked metal building, to which Kennedy had a key, as well as over eight ounces of marijuana, scales, baggies and other drug paraphernalia.
Kennedy was charged with possession of a handgun and possession of a firearm by a convicted felon, trafficking in marijuana possession of drug paraphernalia and the delivery/manufacture of drug paraphernalia.
Along with Sheriff Waters, Deputies Alex Jones, Derek Dennis and Constable Bill Hayes assisted on the case.
Also shown in the photograph is K9 Officer Lyon who recently received a protective vest through a charitable donation from Vested Interest in K9s Incorporated. Lyon is partner to Deputy Derek Dennis, who participated in a special program offering training for the deputy and a free K9 officer for military veterans last fall.
The company provided the protective vest to the McCreary County Sheriff’s Department for Lyon. The vest is valued at between $1,700 and $2,300, carries a 5-year warranty and weighs about 5 pounds.