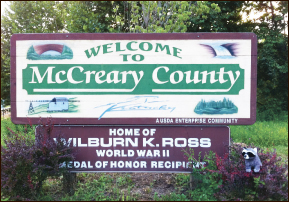 The nonprofit McCreary County Heritage Foundation (MCHF) announced the approval and receipt of a $1.1 million Abandoned Mine Land Grant to be used for railroad improvement, during their February meeting. The Foundation is currently awaiting notification regarding receipt of several additional grants to be used for railroad and downtown Stearns improvements.
MCHF Chairperson JC Egnew also shared the results of a follow-up phone call from Rail Events concerning the recent Polar Express event held at the Big South Fork Scenic Railway (BSFSRY.) Egnew stated Rail Events has offered the Foundation a three year contract with Polar Express and that the 2017 “first ever” Polar Express event at the BSFSRY ranked in the top 25% of all Polar Express Licensees.
Egnew stated he is optimistic about the start of the 2018 scenic railway season in April as the train will be fully operational with six passenger cars. Plans are already being made to accomplish vista clearings along the railway this spring. The vista clearings will done in conjunction with the Job Corps and National Park Service and will allow passengers to have better views of the natural beauty along the train’s scenic route.
The board voted to decline their usual operation of the Coal Bucket (concession stand) located at the end of the BSFSRY route in the National Park Service’s (NPS) Blue Heron Coal Community in the Big South Fork National River and Recreation Area. The park has now begun accepting applications from those interested in providing food services at the Blue Heron facility where over 25,000 visitors visit each year. The food service operation has a full-size kitchen area with outdoor dining facilities. Additionally, in discussing their food service operations, the MCHF board also expressed an interest in possibly leasing the Whistle Stop Restaurant in downtown Stearns.
The MCHF events committee chair, Michelle Wilson Jones, updated the Foundation on planned events in Stearns during 2018. According to Wilson Jones, the committee anticipates a summer concert series (Saturday nights) and Nine & Dine Meals (Friday evenings) at the golf course clubhouse. She also noted plans are being made for a craft fair to be held at the Heritage Hall Community Center in conjunction with the Moonshiners’ Run Car Show, a Wine & Craft event, a Stearns Company Reunion during the annual 4th of July celebration, a possible movie night in the downtown area, and the formation of Giggle Golf teams for young girls. Downtown Stearns will also once again serve as the hub for events related to the annual Yamacraw adventure race in April. More information about events will be forthcoming.
The McCreary County Tourism Commission meets on the third Thursday of each month at 5:00. The McCreary County Heritage Foundation meets on the second Tuesday at 3:30.
In other Tourism-related news, the McCreary County Tourist Commission is busy undergoing reorganization in the wake of several recent resignations. Mehgan Marshall, proprietor of the “Pottery by Mehg” shop in downtown Stearns, is a new Tourist Commission board member replacing Suzie Strunk Thompson who resigned in December as one of the two judge’s choice members on the board. (Since her resignation from the McCreary County Tourist Commission, Thompson has assumed a position on the board of the McCreary County Heritage Foundation-a separate, tourism related board overseeing the Big South Fork Scenic Railway and Historic Stearns.) With Marshall’s appointment to the McCreary County Tourist Commission, one position on that board remains open and must be filled by a representative of the local lodging industry (motel, hotel, etc.) Members are also in the process of interviewing candidates for the McCreary County Tourist Board Administrative Assistant vacancy created by the December resignation of Cristy Hill.