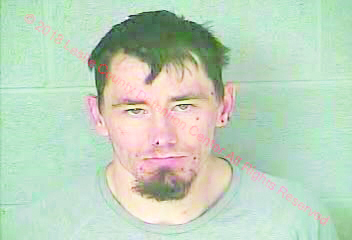 McCreary County Sheriff Randy Waters reported a McCreary County man is behind bars after he nearly struck two deputies with a dirt bike.
Trevor Lawson, 37, of Whitley City was arrested Sunday night following a search in a wooded area off Low Gap Road where he crashed his vehicle after trying to flee from police.
Sheriff Waters stated Deputy Alex Jones was on patrol near Low Gap Road around 7:00 p.m. when a dirt bike driven by Lawson nearly hit his cruiser head on. The Deputy attempted to conduct a traffic stop, but the bike sped away. Deputy Jones alerted Deputy Dustin Ridner, who was on Low Gap Road conducting a separate traffic stop at the time.
Deputy Ridner tried to get Lawson to stop, but he reportedly drove directly at the Deputy, nearly running the officer over. Lawson continued on the road before loosing control of the bike and crashing in to some debris at the side of the road. Injured from the fall, and leaving a trail of blood, Lawson and the passenger fled in to the woods.
Joined by Kentucky State Police Trooper Harrison Wells, the officer attempted to locate the subjects in the woods for nearly two hours before returning to the scene of the accident.
While there the officers heard a noise and located Lawson apparently attempting to return to his motorbike. The subject refused orders to surrender before ultimately being apprehended.
Lawson reportedly had slurred speech and had difficulty standing on his own. Two syringes, a baggie containing methamphetamine residue and an orange pill were found in his possession at the time of his arrest.
Lawson was charged with wanton endangerment 1st degree, flee/evade police (foot and vehicle), wanton endangerment 1st degree (police), OUI, resisting arrest, careless driving and operating an ATV vehicle on a roadway. He was lodged in the Leslie County Detention Center.