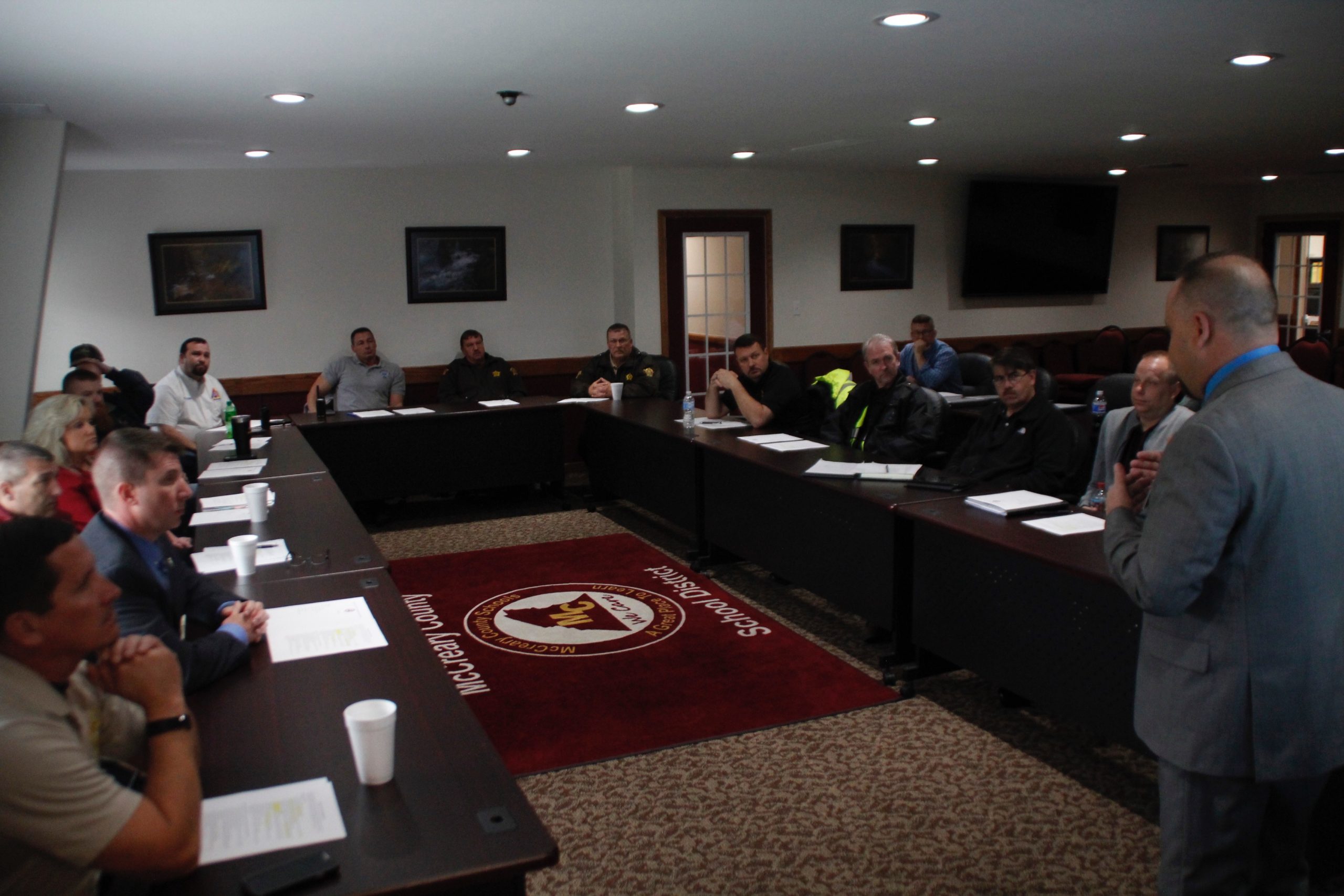 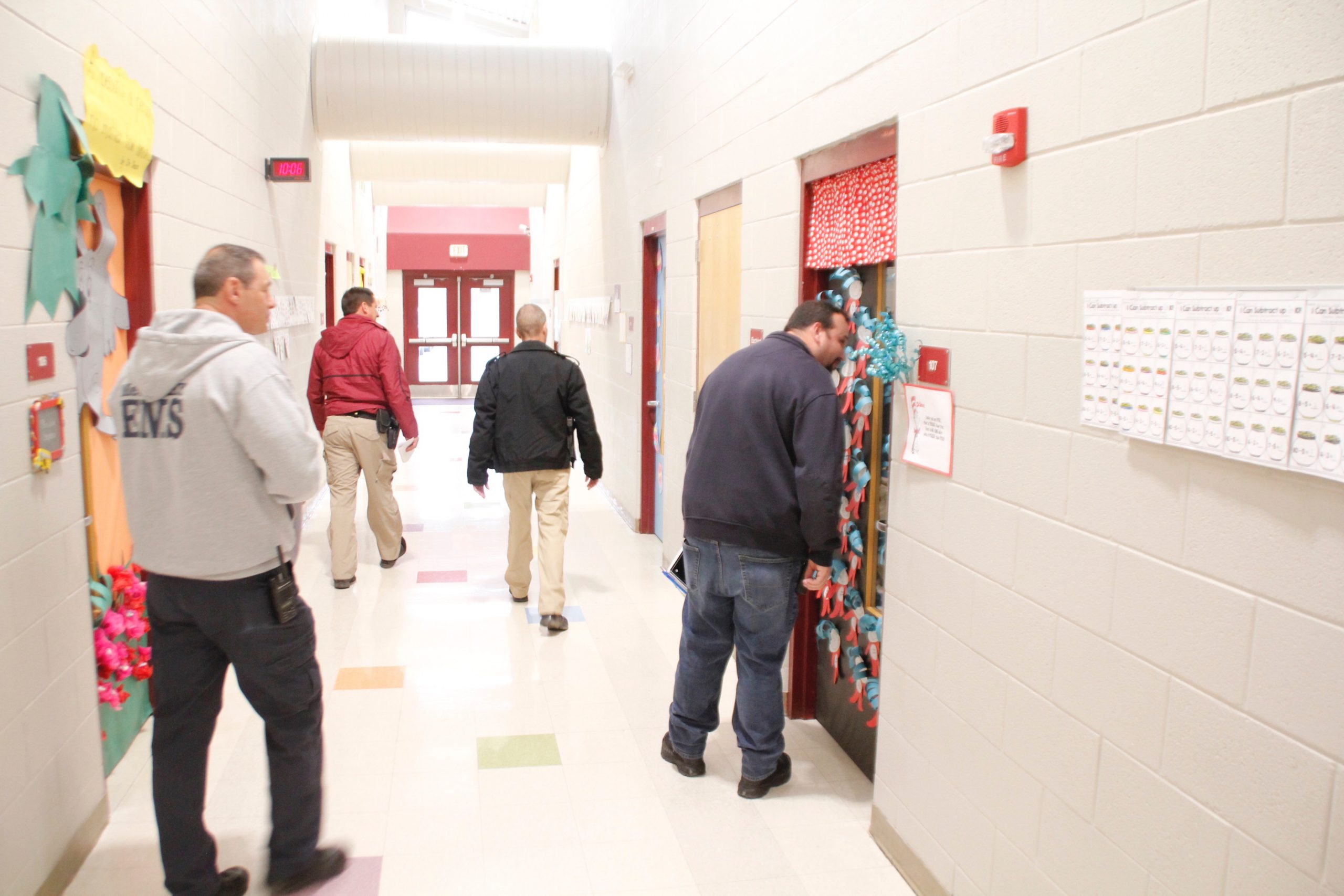 School District officials hosted a meeting with emergency responders Monday to discuss emergency operations in the event of a school shooting or other mass-tragedy-event at a local school.
Superintendent Mike Cash led the discussion for the meeting, which was attended by members of the McCreary County Sheriff’s Department, Kentucky State Police, Whitley City and Pine Knot Fire Departments, McCreary County EMS and McCreary County Emergency Management. Principals from all five schools and school resource officers were also present.
Cash presented the District’s security plan with all agencies, asking for input and critiques on areas that need to be addressed or changed.
In the wake of school shootings in Kentucky and Florida this year, Cash said the McCreary County School District takes school safety very seriously and has been a focus of his term in office to date. He noted several security implementations, such as door-buzzers and security cameras being installed in all schools.
In the meeting the topic of possibly arming teachers was brought up. Cash conceded that could be an option to be considered, but noted that there were a lot of questions to be answered before such a move be implemented.
It was stated that if the School Board would vote to allow certain teachers to carry firearms in school, such as the Pike County School Board did two weeks ago. There are legal questions concerning such a move, as two different Kentucky Statutes seem to contradict each other in that regard.
It was agreed that if such a plan was to be put in place, a strict training policy needed to be utilized, with select teachers not only qualifying for their concealed carry permit, but also a more detailed training course along with local law enforcement officers to ensure those allowed to bring a weapon to school are properly suited to handle the firearm and would act accordingly in an emergency.
With limited law enforcement capabilities, Cash noted School Resource Officers and armed teachers would likely be the first to act in the event of a shooting.
One law enforcement officer noted a potential danger with an armed teacher being as first responders enter the building in a search for a gunman, they may spot the teacher with a weapon and may not have time to identify them as not hostile.
While a possibility, Cash noted that many questions still need to be answered before arming teachers would be allowed.
Other concerns from first responders included traffic control at the schools, particularly Raider Way leading in to the middle and high schools. It was noted that in the event of an emergency the access road to those schools would be severely limited without proper plans in place. The idea would be to have an emergency vehicle block the main entrance, only allowing necessary first responders through to prevent traffic jams. A location off campus would be established for concerned parents to gather and their children would be transported to that location once they were safe.
It was also suggested that School Resource Officers be stationed at the front entrance to each school to better monitor incoming traffic
Cash noted the School District is trying to find funding to add a fifth School Resource Officer to the staff since only one officer is stationed at Pine Knot Elementary, which has two buildings.
All involved agreed additional training and planning would be needed with all agencies involved to ensure all emergency staff and school personnel knew their roles in a school-shooting situation.
On Wednesday the first of four scheduled security walks was held at Whitley City Elementary Schools. District officials and first responders visited the school while a lock-down drill was initiated in order to observe the procedures in place and offer tips and suggestions to better protect the school.
Plans are underway to organize a joint training session involving a mock shooting inside a school utilizing all emergency agencies and school employees
Cash noted this was the third such meeting this year, and additional meetings are planned on a regular basis, where the plans can be examined and refined as time goes on.