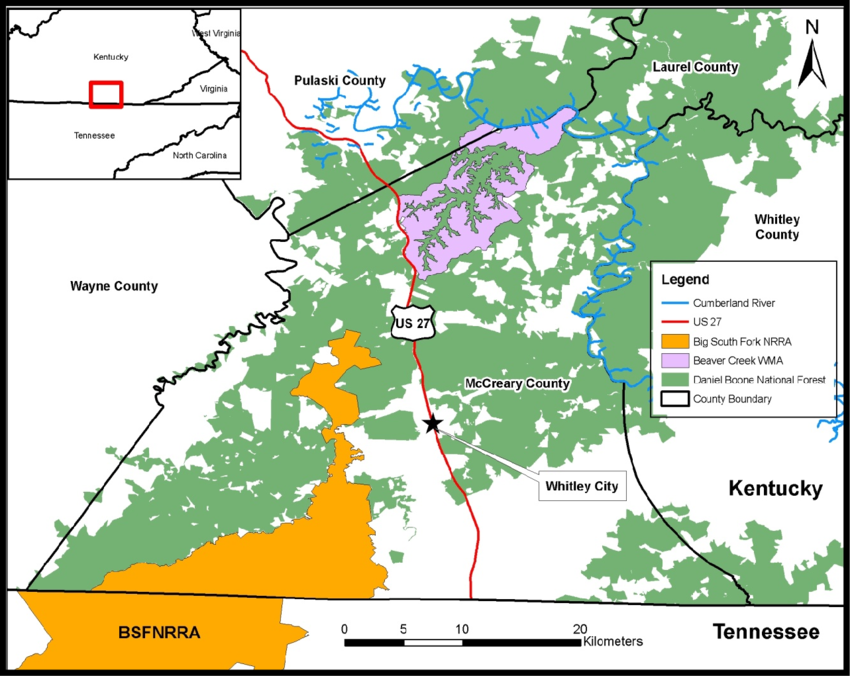 The majority of the land in McCreary County is owned by the government or other non-taxable agencies. This map represents only a portion of the federally owned land.

The exact percentage of land owned by the government in McCreary County is hard to exactly pin down. But one thing is certain that more land here is untaxed than is taxed.
According to data released by McCreary County PVA Bruce Lominac last week the recapitulation totals for McCreary County show a total of $450 million in property is listed as exempt from taxation.
By far the largest percentage of that property belongs to government entities. The Federal government claims nearly $378 million in exemptions, while the state withholds an additional $3.6 million. County-owned properties exempt $15 million, educational facilities total $38 million, and religious exemptions amount to an additional $9.5 million in exemptions.
Lominac states there is only $356 million in actual taxable real estate in McCreary County, $100 million less than is exempted. That leaves a vast discrepancy in the County’s ability to generate revenue from property taxes when compared to other Counties in Kentucky.
The value of the untaxable land could be much higher than is actually listed Lominac stated. The valuation does not take in to account potentially valuable resources, such as timber, on the land. Additionally, much of the land can be considered waterfront property, which would bring in more tax revenue if it were to be developed as residential or commercial.
While the government property is untaxed, the County does receive some compensation in the form of PILT (payment in lieu of taxes) payments from government entities.
According to the McCreary County Judge Executive’s Office the County received just over $363,000 in payments in lieu of taxes for the 2016-17 budget year ($38,000 of that was not received until August of 2017 – after the end of the fiscal year).
In the current budget cycle just over $106,000 has been received so far, with the payment from the Department of the Interior not yet received.
Those monies typically are divided among the General Fund and Road Fund, with the McCreary County School District also receiving a small portion as part of the Secure Rural Schools Act.
McCreary County obtains PILT payments from three primary sources, the TVA, U.S. Forest Service and the Department of the Interior. Those PILT payments can be subject to federal budgets and changes in law. The Forest Service’s Secure Rural Schools funding, for example, has been diminished in recent years due to congressional action.
If the exempt properties were available for taxation at the current rates (9.4 cents per $100 for the county and 41.4 cents per $100 for the school district) an additional $395,000 could be added to the General Fund every year and $1.5 million to the school district Lominac estimated.
While the PILT system is unlikely to change, more and more communities, such as McCreary County, are feeling the pinch of lost revenue due to large portions of the area controlled by the federal government.
According to the United States Department of the Interior, PILT payments are: “Federal payments to local governments that help offset losses in property taxes due to non-taxable Federal lands within their boundaries. The law recognizes the inability of local governments to collect property taxes on Federally-owned land can create a financial impact.”
First established in 1976, the law was amended in 1982 and added to the United States Code.