A Parkers Lake woman was arrested Tuesday night after reportedly resisting arrest and fighting with officers while wearing nothing but a T-shirt. 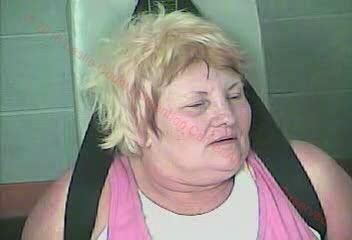 Rhonda Kaye Wright, 49, of Parkers Lake was charged with resisting arrest, disorderly conduct, criminal mischief and assault after the incident and lodged in the Leslie County Detention Center.
According to the arrest citation Deputy Alex Jones and Kentucky State Police Trooper Donnie Jones responded to a complaint call at 3629 Vanover Ridge Road around 11:00 p.m.
The Deputy approached the front entrance and noticed blood on the door. After first knocking several times with no response, eventually a female voice could be heard from inside. After several requests to open the door Wright came out to the porch wearing only a T-shirt. The officers asked her to go back inside and put pants on, but when she returned she was still only wearing a shirt. A second request for her to get dressed was made, but she refused to comply.
After being informed that she was to be placed under arrest for alcohol intoxication Wright became combative and taken in to custody. When placed in the back of the police cruiser, Wright began to kick at the window of the vehicle, causing damage in the process. Deputy Jones advised her to stop kicking, an order she reportedly refused to follow. The officer discharged his taser twice in an effort to get the struggling woman under control. Even after the taser application, Wright continued to fight, kicking Deputy Jones and head-butting the window of the cruiser.
After her arrest she was transported to Leslie County by a Transport Officer, where she continued to behave violently.
Wright reportedly has had several similar incidents in Pulaski County, where she lived previously.