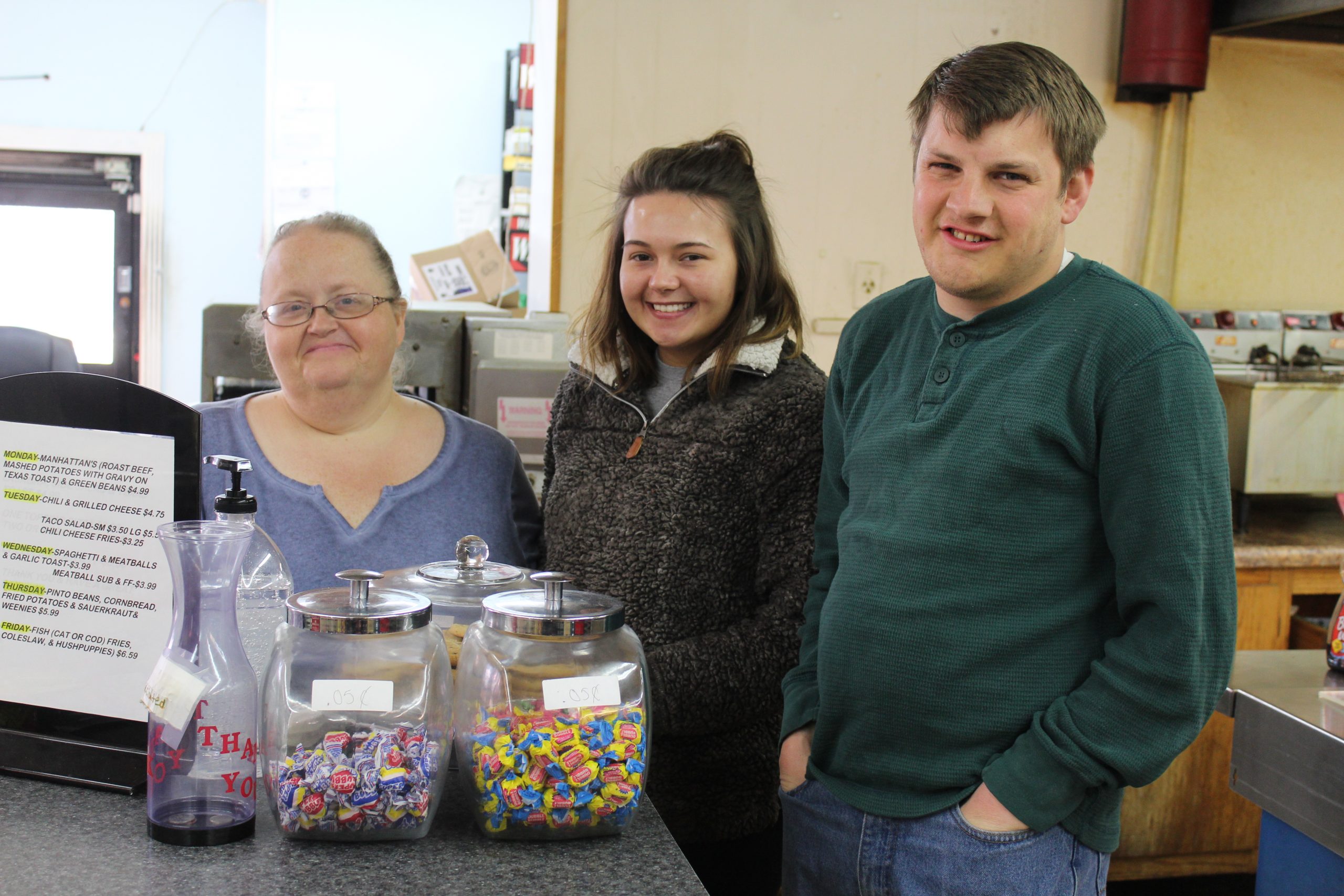 Photo by Eugenia Jones
Lindy Smith and Taylor Heath, employees at the Marshes’ Corner Market, are glad one of their regular customers, Eddie Morgan, was at the store when a fire recently began in the deep fryer. Morgan sprang into action by making sure the employees were safe and the fire was controlled until help could arrive.

Marshes’ Corner Market, operated by Ricky Longmire, is a gathering spot for many “regulars” who meander into the store and delicatessen to “sit a spell” while enjoying such favorites as eggs, biscuits, and gravy for breakfast or burgers, fish, and pizza for lunch and supper. With the exception of an occasional good-natured debate about local politics or county issues, there’s usually not a lot of excitement at the store. However, that recently changed when a grease fire broke out in the deli’s fryer causing one of the “regulars” to become a hero as he sprang into action and helped control the fire.
For Eddie Morgan, it had been an ordinary day. As part of his usual routine, he stopped by the Marshes Corner Market at about 3:00 p.m. to visit his friends. Morgan hadn’t been at the store long when suddenly he noticed something amiss.
“I was talking to some of the workers (Hannah Honeycutt, Taylor Heath, and Macy Sumner) when all at once the deep fryer just started smoking,” Morgan explained. “I told Hannah to get her baby who is only a few months old out of there. I told them all to get outside. There was just too much smoke-especially for a baby.”
The smoke quickly progressed into flames while Hannah, rushing to get her baby outside, yelled for Morgan to get the fire extinguisher.
“I looked around and found the fire extinguisher on the wall,” Morgan exclaimed. “I started spraying. I guess I was nervous in all the excitement because I had a little trouble getting the pin out to start it. I wasn’t able to put the fire out because the fire department told me later that it takes a special extinguisher for a grease fire. I was able to control the fire though and prevent more damage.”
One of the regular customers at the store is quick to credit Morgan for his quick action.
“If it hadn’t been for Eddie, the flames would have gotten a lot higher and there would have been more damage,” the customer remarked. “I saw the whole thing on the store camera’s video and if the flames had gotten into the ceiling, it would have all been over for the store.”
Morgan was able to leave the building and get out of the smoke when Tim Jones, who lives next door to the store, came in and took over the extinguisher. Upon leaving the building, the quick thinking Morgan went next door and alerted those in the adjacent section of the building where the Marshes’ Siding Post Office is housed. The fire department quickly arrived and soon things were almost back to normal.
Taylor Heath, who was working when the fire occurred, is thankful Morgan stopped by to visit that day.
“Eddie did it all,” she exclaimed. “He told us all to get out and grabbed the fire extinguisher. If it wasn’t for Eddie, the store would probably have burnt. I’m so glad he was here because I wouldn’t have known what to do. Eddie is a hero, for sure!”