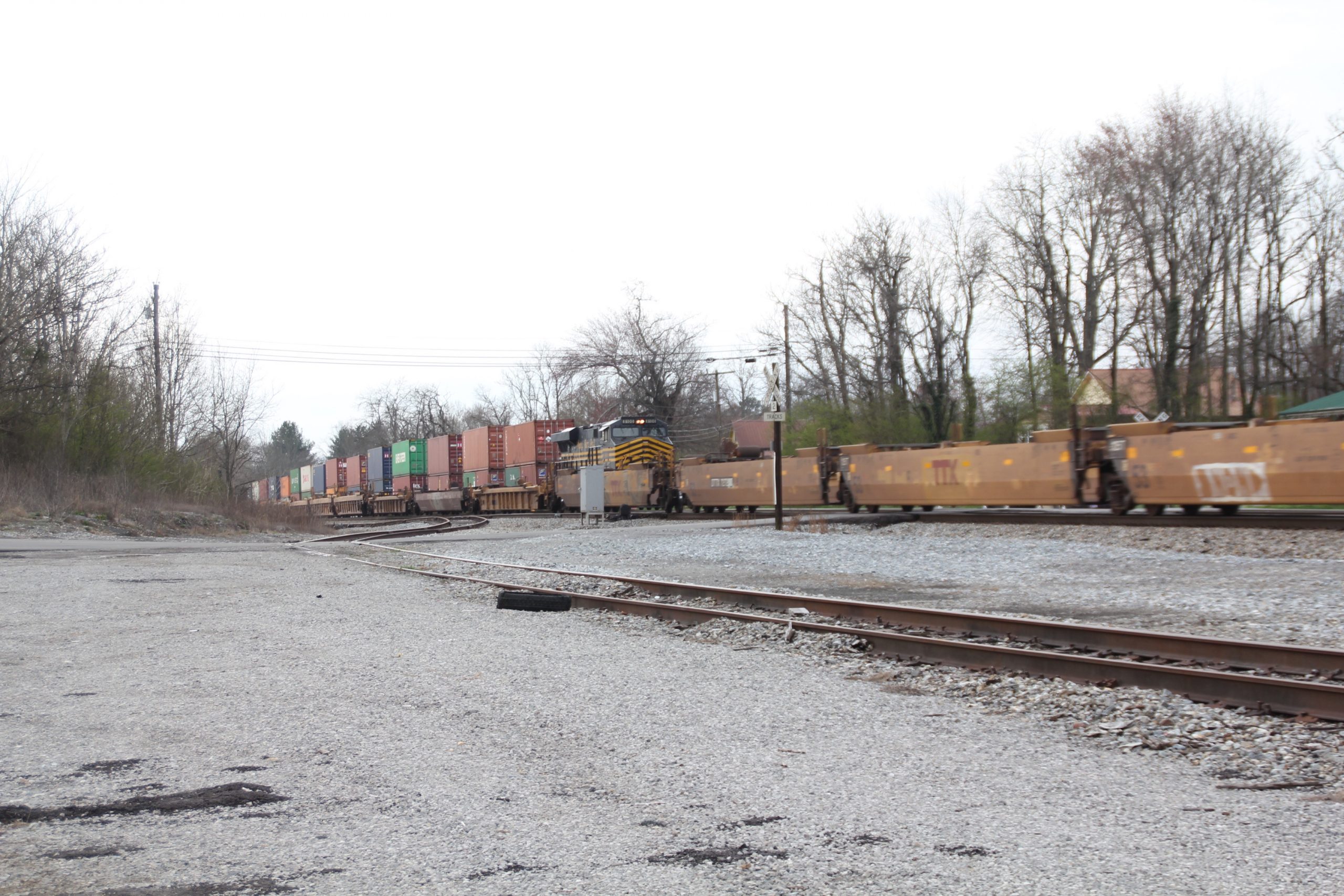 Photo by Greg Bird
A train waits just south of the Century Lane crossing as another northbound train passes by.

A Norfolk Southern train was cited for blocking a roadway Sunday afternoon, leading to a possible court date, and hopefully relief for several residents who have been complaining about idle trains preventing them from getting home.
McCreary County Sheriff Randy Waters stated a Norfolk Southern train was cited for obstructing a highway in violation of Kentucky Revised Statutes.
‘We have had multiple complaints over the past few months of trains blocking the road,” Sheriff Waters said Monday. “This has gone on long enough and Norfolk Southern needs to take action to stop blocking our citizens from using their roads.”
The Sheriff stated several complaints were called in to McCreary County 911 dispatch Sunday afternoon concerning a train blocking an intersection in Pine Knot, and Deputy Ridner sought out the engineer to write a citation.
The Deputy arrived on scene at 3:44 p.m. and noted the stopped train. Speaking to the engineer at Mud Cut he was told the train could not be moved, and the engineer was uncertain when it could start again.
As more complaints came in to 911, Deputy Dustin Ridner contacted Norfolk Southern who told him the train was stopped waiting for a train coming in the other direction, and they were aware of the blocked intersection. After receiving several assurances from the train dispatch that the locomotive would soon be moving, the intersection was finally cleared at 4:30 – after the train had been idle for two hours.
Sheriff Waters noted that there were only two boxcars at the tail end of the train that needed to move forward in order to clear the road.
“Two car-lengths was all that was needed to unblock the intersection,” he said. “If they would have just pulled the train forward a little bit, people would have been able to use the road.”
The offense is only a misdemeanor, which carries a fine, but the Sheriff hopes the train company will realize they need to change their procedures and stop impeding traffic. Sheriff Waters added this isn’t the first citation issued to the train company from his department.
One resident frequently affected by idle trains blocking an intersection is Wanda Duncan. Duncan lives off Mount Pleasant Road, and she has documented at least 10 incidences in the past three months where a train has sat for longer than half and hour, and up to three hours in one instance, at the junction of Mount Pleasant and U.S. 27.
Those blockings present a health and safety risk to Duncan and her fellow residents, she said.
“What if there was a medical emergency?” she asked. “Or what about kids needing to get off the school bus? When the train is sitting there, there is nothing that can get in or out in an emergency.”
Duncan says she has contacted representatives from Norfolk Southern on multiple occasions to complain, but when she has spoken with representatives they claimed the delays were caused by crew switching.
“They can’t explain why they don’t switch crews at a place where no intersection is blocked,” she said. “It’s like they don’t care if everybody has to wait.”
Duncan said residents on Mount Pleasant Road have two alternate routes to take when the intersection is blocked, but neither one is safe.
“We could take Round Top Road, which is a narrow one-lane road,” she said. “There is no way a school bus or ambulance is going to be able to get through when there is traffic.”
“The other way is down to Winfield through Kingtown,” she said. “Parts of that road are only one lane as well, and it is 15 to 20 miles out of the way.”
“It’s a dangerous route either way,” Duncan said. “Someone’s going to end up getting killed.”
Sunday’s complaints came just two days after another train caused blockage on Century Lane.
Similar instances have occurred in Pulaski County, and the matter is headed before a District Judge.
Norfolk Southern has been cited at least four times for violating KRS 277.200, which prohibits railroads to block highways or streets for more than five minutes at time, unless the stoppage is caused by circumstances beyond the railroad’s control.