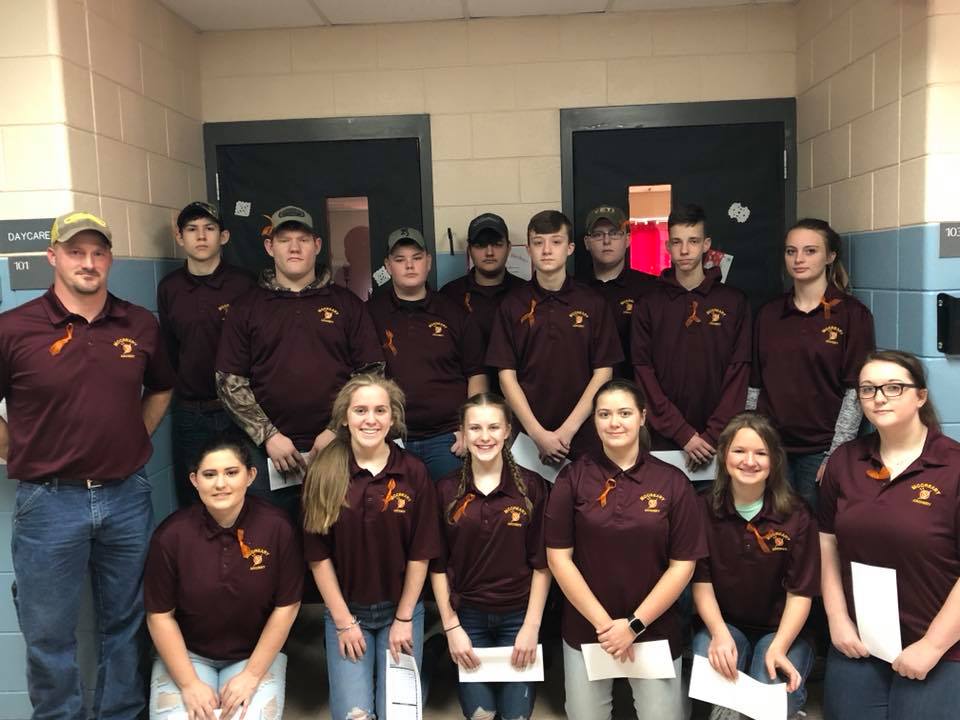 Photo courtesy of McCreary County Schools
The McCreary Central High School archery team competed in the state tournament in Louisville over the weekend.

The largest field in the 17-year history of Kentucky’s National Archery in the Schools Program (NASP) state tournament produced impressive individual performances and an overall team title for Madison Central High School.
The event was held March 29-31 at the Kentucky Exposition Center in Louisville and drew a record 6,504 students from 396 schools across the state. The McCreary Central High School archery team was among the squads in the tournament. Results for the McCreary Central team are available online at https://nasptournaments.org/TournamentDetail.aspx?tid=3336
“The excitement this weekend was contagious. It was heartwarming seeing so many happy faces,” said Lisa Frye, state NASP coordinator for the Kentucky Department of Fish and Wildlife Resources. “Archery continues to grow in the schools across the state. The children absolutely love the sport. By the looks of all the parents and grandparents that I saw, I’d say they love archery, too.”
Elementary, middle and high school student archers competed for individual and team honors. After practice rounds, each competitor shot 15 arrows at bullseye targets from 10 meters and 15 more from 15 meters for a total possible score of 300.
Anderson County High School freshman Henry Thompson swept the boys’ overall titles in the Kentucky NASP state tournament and the newer Kentucky NASP/International Bowhunting Organization (IBO) 3D Challenge with a score of 298 in each.
The 3D Challenge differs from the traditional bullseye state tournament in that archers shoot at six lifelike foam targets depicting various game animals. The 3D targets are set in a diagonal line from 10 to 15 meters and the scoring rings are the same size and shape of the rings on standard NASP bullseye targets.
The girls division of the Kentucky NASP state tournament came down to a shootout between Simon Kenton High School sophomore Holly Snow and North Laurel Middle School seventh grader Savannah Philpot. They tied for first place with scores of 295. Snow won the tiebreaker and the girls division overall title.
Madison Central won the overall team title in the 2016 Kentucky NASP state tournament and this year finished ahead of Bullitt Central High School. Muhlenberg County High School, Henderson County High School and Lexington’s Lafayette High School filled out the top five.
Pulaski Northern Middle School and Morgantown Elementary won their respective divisions.
The top 10 seniors in the boys and girls divisions in the state tournament received $1,000 scholarships to apply to any post-secondary education.
Lincoln County High School freshman McKenzie Settles earned top individual honors in the girls division of the 3D Challenge. Anderson County High School won the 3D Challenge’s overall team title.
Complete state tournament results are available online at nasptournaments.org. Click on “Tournaments” then select “Kentucky” and “Completed This Season” from the dropdown menus.
The next step for many of the archers who competed in the state tournament is the 2018 NASP Eastern Nationals scheduled May 10-12 at the Kentucky Exposition Center.