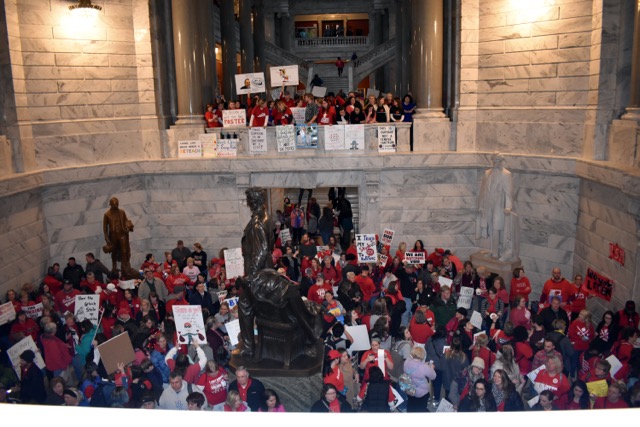 Kentucky teachers were shocked and surprised when the Kentucky Legislature passed a pension reform bill last Thursday, leading to school closures throughout the state as teachers descended on the state capitol to protest.
Proposed pension reform had been a contentious topic throughout the legislative session with teachers and state employees anxiously awaiting what actions the government would take to attempt to save the failing pension system.
Earlier proposals angered teachers when they learned they could be losing cost of living adjustments and other benefits they felt were promised to them. The complaints seemed to stall legislative action on the pension fund, which is among the worst funded in the United States
The bill, which had been heavily criticized by teachers when it was first introduced, seemed dead in the water after three weeks had passed without action. But, on Thursday the House State Government Committee brought it back to life by tacking the bill on to Senate Bill 151, originally intended to deal with “wastewater services.”
The bill passed the House of Representatives by a slim 3-vote margin, 49-46. No Democrat voted for the measure, while 11 Republicans broke ranks and voted against – to no avail.
The Senate passed the bill by a broader margin, 22-15, with no Democrats in favor and 5 Republicans against.
Though the bill passed last week was not as damaging to current and retired teachers as originally feared, new teachers hired after January 1 next year will see radical changes.
Here are some highlights of the pension bill as passed.
New teaches will be placed in a hybrid cash-balance retirement plan, with 9.105 percent of their salary going toward retirement, school districts contributing two percent and the state contributing six percent.
Future teachers will also have to work longer before becoming eligible for retirement benefits – until their age and years of service total 87 or they reach age 65. Current teachers can retire after 27 years of service.
No cost of living increase cuts for current teachers and retirees as initially proposed by the Senate.
After December 31 new sick days will no longer be eligible to be put toward retirement. Accrued sick days can still be put toward the pension until then.
No contributions from teacher’s annual salaries will have to be used for retiree health insurance funds as proposed by the Governor.
The bill also ends the “inviolable contract” for new teachers hired after January 1, 2019, meaning the legislature can adjust the benefits in their retirement plan at any point.
The bill’s passage drew immediate ire from more than 200 teachers and other concerned citizens gathered outside the chambers who took up a chant of “shame on you” to voice their displeasure.
The unrest grew Friday as several school districts across the state were forced to cancel classes as teachers called in “sick” and made their way to Frankfort to protest.
Monday, with the majority of the state’s school districts on spring break, thousands of teachers descended on the capitol to not only protest the pension, but to raise concerns over the proposed budget reductions that would affect school districts with loss of funding in several areas.
The McCreary County School District, was one of only a few districts not on break this week, but joined with other districts to cancel classes Monday to allow teachers to join the rally in Frankfort.
Late Sunday evening Superintendent Mike Cash made the announcement that classes would be canceled, stating several teachers had intended to participate in the rally.
“Throughout the weekend, no staff member of the McCreary County School District expressed interest in attending the rally in Frankfort to their principal/supervisor,” the notice read. “I asked principals/supervisors to notify staff this afternoon to see if anyone wanted to attend. After receiving the numbers of teachers wanting to attend, school will be cancelled in McCreary County School District for Monday, April 02, 2018.”
Calling the bill a “grand compromise that we can live with,” one of the lawmakers who brought the bill to the committee, Majority Leader Jonathan Shell, of Lancaster said the bill is an attempt to save the pension while still taking teacher’s concerns in to account.
“What we’re trying to do here today is to make an attempt to put together all we have heard from stakeholders,” Shell said. “We have a lot of people in this state that would like to go a lot further, and we have a lot of people in this state that would like to go not as far as this.”
Kentucky Attorney General Andy Beshear has promised to sue to block the implementation of the new pension plan if signed by the Governor.
“I am outraged. Last night, we saw government at its worst. When the leadership of the House and Senate in the dark of night amended what was supposed to be a sewage bill into what they claim is pension reform, they did it through this amendment where they didn’t allow any public comment or testimony. They refused to hear from you,” Beshear said in a video message posted to Twitter Friday morning.