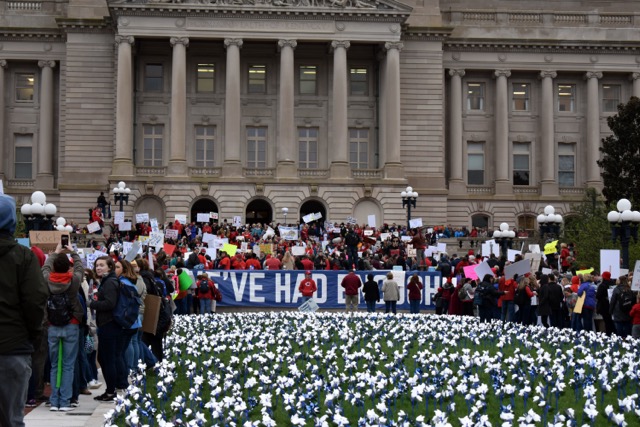 Photos by Teresa Revlett Kentucky Press Association Hundreds of teachers rallied at the state capitol Monday to protest the pension plan and proposed cuts to education in the budget.

FRANKFORT – House and Senate Republicans unveiled the most significant changes to Kentucky’s tax code in more than a decade Monday in attempts to provide funding in a tight budget year.
The full bill is not yet available to the public. House Speaker Pro Tempore David Osborne and House Majority Leader Jonathan Shell declined to speak to the Herald-Leader.
“The whole way this was done is unconscionable,” said Rep. Jim Wayne, D-Louisville. “It’s heavy handed, it’s done by an elite and it’s done behind closed doors without any opportunity for the public to voice opinions or to vet these ideas.”
The Senate passed the budget and tax bill after hours of discussion on Monday afternoon. The tax bill passed without the support of seven Republicans, while only two Republicans voted against the budget.
The bill cuts the individual and corporate tax code to a flat 5 percent tax. Currently, anyone who makes more than $8,000 pays 5.8 percent on their individual income tax. Those who make more than $75,000 pay 6 percent.
The income tax changes cost the state $114.1 million over the next two years, while the corporate tax changes cost the state $80 million over the next two years. Some of the changes are cuts, while others are increases like removing the $10 individual income tax credit.
The Legislative Research Commission analysis of the revenue bill does not contain a breakdown of how much the tax cuts would cost the state.
“We all agree we need comprehensive tax reform,” Rep. Steven Rudy, R-Paducah, told the budget committee. “This is the step to move Kentucky way up the ladder of competitiveness.”
The bulk of the new revenue comes from the tax on select services. While the bill avoided levying taxes on any of the large services in Kentucky—attorneys, accountants and hospitals in particular—through a series of taxes on smaller services, the state estimates it will bring in $436.3 million in revenue.
The state will also bring in $244.7 million over the two-year budget with a 50 cent increase to the cigarette tax and a 15 percent tax on electronic cigarettes.
The LRC analysis did not contain an estimated revenue from each tax on services. However, the 2016-2018 Kentucky Tax Expenditure Report estimated the state lost $288 million in 2017 and 2018 by not taxing automotive and miscellaneous repair services.
A large crowd of Kentucky teachers and their supporters converged at the state Capitol Monday to make themselves heard on pension changes they oppose and education spending they want. Marcus Dorseymdorsey@herald-leader.com
Along with automobile repair services, the bill goes after some of the luxury services Wayne recommended taxing in his annual tax bill, like landscaping services and golf courses. But it also included some that were not, like a tax on veterinary services for small animals and a service tax on gyms.
“Most of them are going to hurt poor people,” Wayne said. “For instance if you are a widow living on a fixed income and you have two cats and you take them to the vet.”
It is unclear whether the tax on fitness and recreational sports centers will apply to non-profits, like the YMCA.
Senate President Robert Stivers, R-Manchester, said legislators applied the sales tax on certain taxes because it expands the state’s tax base and is the “fairest, most equitable” way to raise more money for the state.
But Jason Bailey, the executive director of the Kentucky Center for Economic Policy, said the bill will disproportionate affect poor Kentuckians.
“The whole plan is a big tax shift from the wealthy and corporations to the middle class and poor,” Bailey said.
The conservative policy group Americans for Prosperity Kentucky, opposed the tax increases as well, saying they funded out-of-control spending.
“It is disgusting that even with large Republican majorities in both chambers, lawmakers chose to continue unchecked spending and fund it with massive new tax increases,” said Andrew McNeil, the state director of AFP and a former Bevin staffer. “This proposal is a gift for special interests and a slap in the face to hardworking Kentuckians.”
The increased taxes, which raise $486.9 million over the two-year budget, when combined with $310 million from the Kentucky Employees Retirement Fund will help fund an increase to K-12 education and will help pay down Kentucky’s $41 billion unfunded pension liability.
The budget completely funds transportation costs for K-12 schools, which Gov. Matt Bevin had proposed cutting, and it provides an increase to $4,000 per pupil in the funding formula for K-12 schools, known as SEEK.
Even though the bill fully funds Kentucky’s pension systems, teachers swarmed throughout the Capitol, still upset over the pension bill Republicans rushed through Thursday, and urged lawmakers to vote against the bill.
While the budget maintains the 6.25 percent cuts to higher education, Rep. Steve Rudy, R-Paducah, says it provides $31 million back to the universities through performance based funding. It maintains the provision that faculty could lose tenure when programs are eliminated.
It eliminates funding for future private prisons, instead making changes to allow county jails to accept more state inmates to deal with Kentucky’s overcrowded prison population.
Lawmakers claimed they fully funded health insurance for 8,554 retired teachers who aren’t old enough to qualify for Medicare through a House-proposed mechanism that provides $59.5 million in the first year of the budget and then requires the Teachers’ Retirement System to pick up the funding in the second year.
The money also allowed the legislature to fund some of the 70 programs Bevin proposed cutting in his version of the budget, including the Kentucky Mesonet, the state’s civil legal aid and partial funding for the Robinson Scholarship at the University of Kentucky.