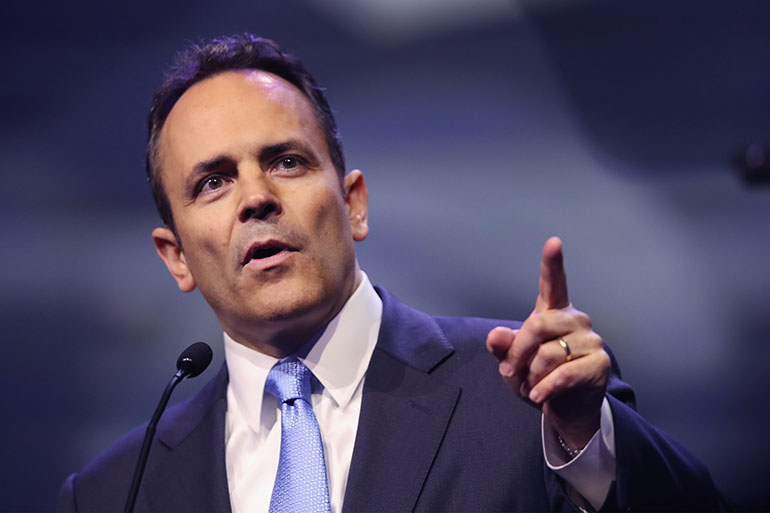 File photo
Govenor Matt Bevin has set up a showdown with the Kentucky Legislature by vetoing both the tax reform and budget bills passed last week. The House and Senate meet again Friday and Saturday and can override the veto with a majority vote.

Governor Matt Bevin announced Monday that he does not believe the tax reform bill and budget passed by the Legislature last week do what they need to do and vetoed both – sending them back to Congress.
The budget has hundreds of millions of dollars in spending that we really can’t afford to spend,” Bevin said at a news conference. “Sure, it feels good. Sure, it quiets people down. But the reality is the money’s not there and we’re kicking the can down the road. And that is not responsible.”
“I’m going to veto the entire budget and I’m going to veto the entire tax bill and it will be up to the legislature to decide what they want to do in response to that,” he added. “But what I’m asking them to do and what I believe the right thing to do is, for Kentucky, both now and in the future.”
The promise to veto does not include a veto on the controversial pension reform bill, which angered many Kentucky teachers. The veto could further upset educators as the bills included increased SEEK allocations and transportation funding for school districts, which the Governor had asked to be cut. The Governor reportedly signed the Pension bill Tuesday, officially enacting it to law.
By law Governor has the authority to veto all, or parts of bills passed by Congress, and Monday’s actions took it to the maximum as no portion of the increased taxes or spending survived his veto pen.
Congress is scheduled to return to the capitol Friday and Saturday for the final two days of the legislative session, where they will have the option to try and override the vetos.
Unlike a Presidential veto, where a two-thirds majority is needed for an override, a simple Majority is all that is needed in the Kentucky House and Senate. With the bills passing both chambers by slim margins (51-48 in the House and 20-18 in the Senate), it is unclear if lawmakers can muster enough votes to salvage the tax plan and budget.