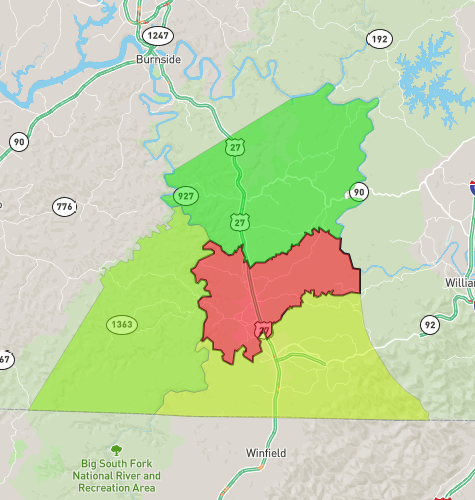 Census tract 9603, highlighted in red, has been designated as an Opportunity Zone – providing incentives for business and industry to invest in the area. Tract 9604, in yellow, was also proposed – but not selected by Governor Bevin.

A portion of McCreary County was one of 144 zones in 84 Kentucky counties named as an Opportunity Zone by Governor Matt Bevin. The designation comes through a program under President Trump’s Tax Cuts and Jobs Act of 2017, which aims to encourage long-term investments in low-income urban and rural communities.
According to the Governor’s Office being named an Opportunity Zone “offers significant federal tax breaks and deferrals to entities and individuals investing in Opportunity Funds, which support development projects within one or more zones.”
“The Opportunity Zones approved today by the U.S. Department of the Treasury provide one more reason for companies and businesses to consider locating in Kentucky,” said Governor Bevin in a release announcing the zones. “Kentucky will maximize this golden chance to attract economic development projects to communities most in need across the commonwealth, and the Kentucky Opportunity Zone Initiative will strengthen and rebuild both rural and urban areas. Whether along the Mississippi River in West Kentucky, throughout West Louisville’s neighborhoods, or in the heart of Appalachia, these zones will spur investment, growth and community development.”
McCreary’s inclusion came about by a proposal put forth by Judge Executive Doug Stephens and Treasurer Mark Sewell after the Kentucky Cabinet for Economic Development issued a call for cities and counties to submit Census tracts they proposed for Opportunity Zone designation.
The Kentucky Highlands Investment Corporation, an organization dedicated to economic growth in southeastern Kentucky, had submitted a proposal which included potions of all 22-counties they serve – including McCreary, but Sewell felt it was important to submit a separate proposal for the county.
“Kentucky Highlands wrote a plan with multiple counties, and we supported that plan, but we knew it didn’t fully serve us as well as it could have,” Sewell said Tuesday.
McCreary County’s proposal to the Governor not only included the Whitley City Census Tract, but also included the tract where Pine Knot and the McCreary County Industrial Site is located, but that portion was not included in the final approval from Frankfort.
“The Governor only could name 25-percent of all the zones submitted,” Sewell said. “Apparently that area did not make the cut.”
The McCreary zone encompasses Whitley City, Stearns and Revelo, and extends westward to include Yamacraw, Worley and Barthel, southward to Hickory Grove and eastward along Kentucky Highway 700 (Sand Hill Road).
According to the Opportunity Zone website the designations were a multi-step, data driven process. Eligible census tracts were determined using five economic indicators: housing stability, education, mobility, economic security, and health. Throughout the process several tracts were eliminated based on a lack of response for proposals, and those surviving the cuts were evaluated to ensure they met federal requirements for designation.
Finally Governor Bevin submitted 144 tracts, the maximum allowed, to the United States Treasury Department, and all were approved this week.
Every Kentucky County that submitted a proposal received at least one Opportunity Zone.
McCreary County Judge Executive Doug Stephens said being included in the Opportunity Zone designation was potentially a “big deal” for McCreary County as it not only provides incentives for outside industry to locate here, but also encourages local entrepreneurs to potentially expand their business and operations.
“This could be a great way for McCreary County to expand existing industry and attract new businesses to the area,” he said. “The tax incentives that come with investment in an Opportunity Zone make it very attractive to individuals and businesses to invest in our county.”
U.S. Senate Majority Leader Mitch McConnell said the program will aid in transforming the quality of life and economies in communities statewide.
“Today’s Opportunity Zones announcement is another reason why tax reform is good for Kentucky families and our state’s economy,” McConnell said. “Opportunity Zones will breathe new life into struggling communities left behind by Obama-era policies. From coal country to farming communities and everywhere in between, overregulation was holding our economy and our workers short of their full potential. We are getting the government’s foot off the brake and letting the economy flourish. These zones will make Kentucky’s communities attractive places to do business, open new facilities and create good-paying jobs. I know there is a lot of excitement throughout our state.”
More information on the Opportunity Zone program can be found at www.KYOZ.org.