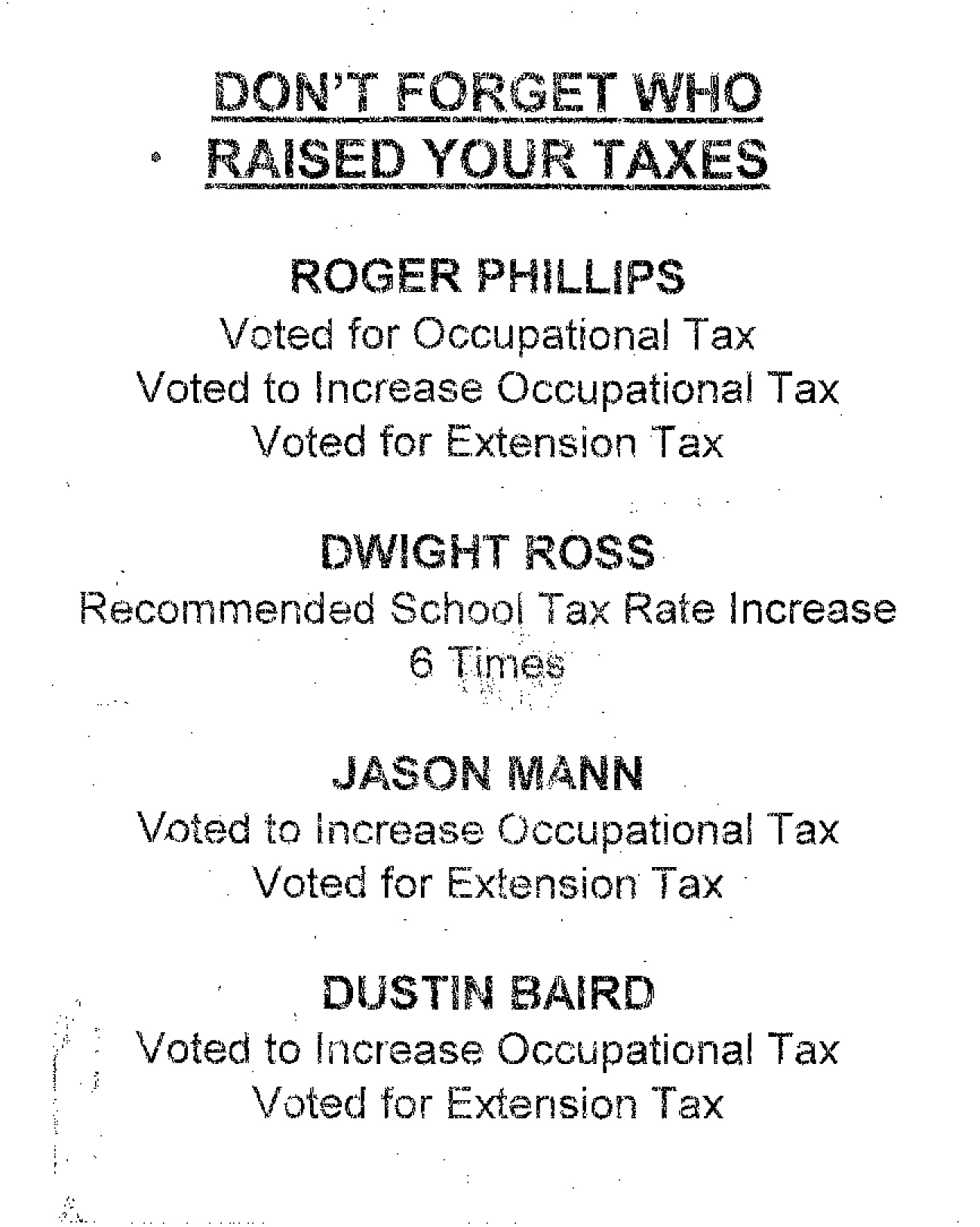 Photo by Greg Bird
A postcard send to several McCreary County residents has some candidates upset over what they feel is dirty politics.

Several McCreary County residents received a postcard in the mail last week that has left many, including some elected officials, upset over what could be called dirty politics.
The postcards were an item of discussion near the end of the Fiscal Court meeting last Thursday as one of the Magistrates named on the mailing spoke out against the tactic.
Magistrate Jason Mann addressed the card during the other business portion of the meeting, calling the anonymous sender a “coward” and accused them of spreading “lies.”
The postcard, with no return address and a Knoxville postage mark, is labeled “Don’t forget who raised your taxes,” and lists Magistrates Mann, Roger Phillips and Dustin (whose name is misspelled) Baird as voting for the increase of the Occupational Tax and voting for the Extension Tax. Phillips is also noted as voting for the Occupational Tax.
The card also includes the name of PVA candidate Dwight Ross, citing he recommended a School District tax increase six times.
Mann acknowledged he voted to increase the Occupational Tax last year, but noted the County was in a desperate financial state at the time and was in jeopardy of losing essential services.
He also stated neither he, nor his fellow Magistrates, voted for the Extension Tax.
“They went pretty low here,” he said and encouraged members of his district to call him if they had questions.
He also called out the postcard’s sender, inviting them to a face-to-face meeting.
“We’ll go out to lunch and we can talk about the yellow streak running down your back,” he said.
Magistrate Phillips commented to say he never voted for the Occupational Tax, nor the increase last year.
“I won’t run from my record either,” he said.
It is unclear if the postcard violates campaign advertising laws. KRS 121.190 (1) states: “All newspaper or magazine advertising, posters, circulars, billboards, handbills, sample ballots, and paid-for television or radio announcements which expressly advocate the election or defeat of a clearly identified candidate, slate of candidates, or group of candidates for nomination or election to any public office shall be identified by the words “paid for by” followed by the name and address of the individual or committee which paid for the communication…”
While the card does not directly advocate against election of any of the listed officials, it could be determined that a vote-against is implied.
If an individual who is running for an office is found to be in violation of the statute they could be removed from the ballot. A current office holder found guilty of violating the law could be removed from office.
During the citizen participation portion of the meeting many residents spoke out against the litter problem in the county, and the lack of availability at the Transfer Station in Stearns.
One citizen asked if it would be possible for the Transfer Station to be open more than one day a week as it currently is. Judge Stephens responded that decision would be up to Poff Carting, who operates the facility under their contract with the county, but he noted when the county ran the station last year it was prohibitively expensive.
It was also noted that it was cheaper for citizens to bring their bulk trash to the landfill in Scott County than to the Transfer Station. Judge Stephens explained that Poff Carting contracts with Scott Solid Waste to provide a dumpster at the station, and also to haul and dump the garbage – so that additional cost had to be passed on to consumers. He acknowledged that, inmost instances, it would be cheaper to bring the bulk waste to Tennessee.
Other citizens asked about the prosecution of illegal dumpers who throw their trash on the road or in illegal dump sites. County Attorney Conley Chaney said that was more of a matter for the legal court rather than the Fiscal Court.
He did state that the County has an ordinance prohibiting illegal dumping, but some definitive proof, such as a license plate or identifying trash is needed for him to present a case. He did encourage anyone who witnesses someone dumping to get a license plate number, if possible and contact his office.
One citizen stated he had cleaned trash off a roadway and found discarded mail. He called 911 to get an officer to respond, but was told to just throw the trash away.

In other actions of the Fiscal Court Thursday:

Judge Stephens presented a Jail Fund draft budget for the upcoming fiscal year.
Stephens stated the current jail budget is projected to be about $150,000 over what was budgeted for last year, so the proposed budget reflects current expected spending with an additional increase to provide an extra cushion in case of overruns next budget year.
The proposed Jail Fund budgeted for 2018-19 projects a total cost of about $1.39 million in spending overall. The majority of the cost, $1.034 million, is directed toward housing of inmates in other counties facilities.
Last year the original budget for the Jail Fund passed by the Fiscal Court called for $1.132 million in total cost. Through April 16, 2018, the Jail Fund budget has risen to $1.211 million, an overrun of about $80,000.
The Fiscal Court voted to increase the Occupational Tax rate by half a cent last year, with the additional revenue to be dedicated directly to the Jail Fund. That increase is projected to add approximately $537,000 to the fund this year.
It was further noted that, despite the overrun in the Jail Fund, the current General Fund has about $327,000 cash on hand, the best financial shape the Fiscal Court has been in several years.
Magistrate Roger Phillips commented that the surplus could indicate a reason to lower the Occupational Tax rate.
“If we keep doing that we need to look at reducing that (the Occupational Tax rate),” Phillips said. “There is no sense in spending people’s money if we don’t have to.”
Judge Stephens said that could be a possibility for the Court to discuss at a later date.
Magistrate Phillips asked Judge Stephens to look in to the possibility of adopting a Drug Free workplace policy. Doing so could save the County five-percent on their insurance coverage each year.
Stephens said the policy would be beneficial to adopt, but the Court needed more information on costs involved with the expanded drug screening required by the policy. He stated when the County requests bid for drug screening next month they will ask for costs on the new tests to see if they were affordable.

The Court approved a resolution supporting a Community Development Block Grant to be submitted by the Water District. Judge Stephens noted the grant was to be used for water line expansion in the southeastern portion of the county.
The Court also approved a resolution supporting a Homeland Security grant proposal from the Ambulance Service to purchase additional equipment.

The meeting adjourned after a brief executive session where the Fiscal Court reviewed two potential settlement proposals concerning the recent legal action taken against revolving loan holders.
Following the 15-minute session the Court noted two businesses had proposed a settlement plan in an attempt to avoid litigation, but the Court opted to reject both proposals and continue with the lawsuits filed.
The next regular scheduled meeting of the McCreary County Fiscal Court will be on Thursday, May 10.