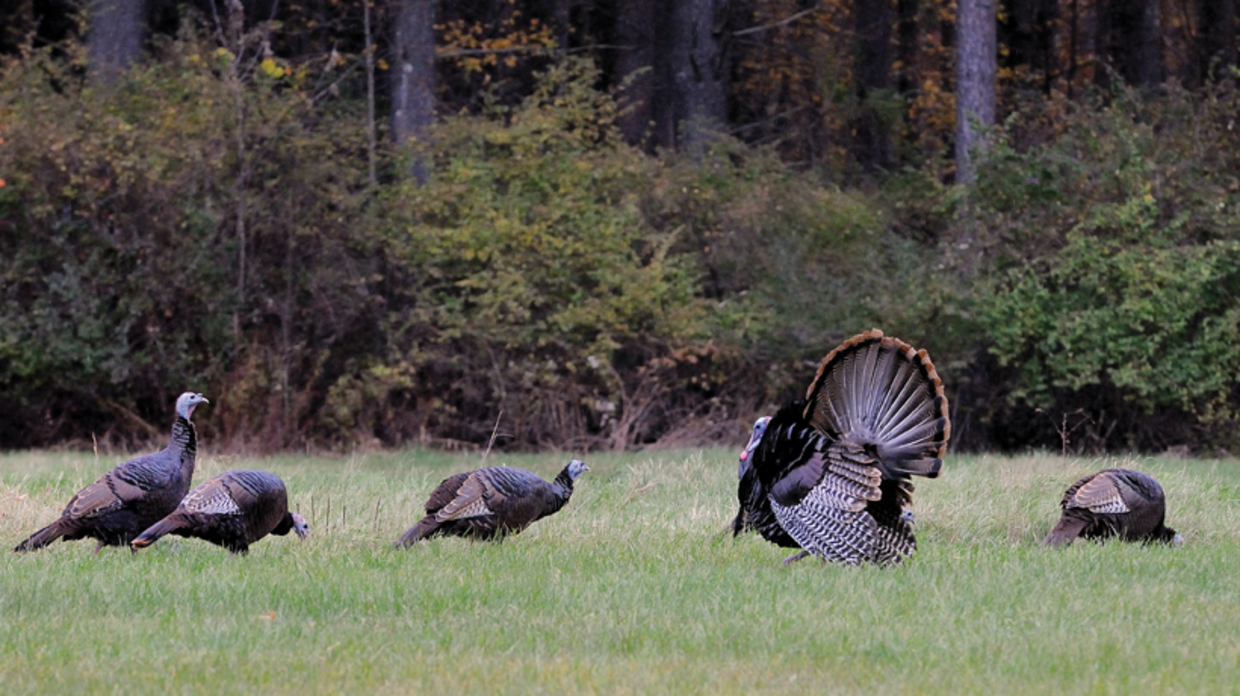 The National Wild Turkey Federation (NWTF) recently presented a “Making Tracks” award to the Daniel Boone National Forest (DBNF) and recognized a DBNF Stearns Ranger District employee, wildlife biologist Joe Metzmeier, as being instrumental in working to strengthen and expand the partnership between the local forest and the NWTF.

“Making Tracks” awards are given to state and federal agencies and recognize people and projects that best incorporate conservation education, partnerships, and wild turkey management. This year’s awards were presented during the National Wild Turkey Federation’s 42nd annual Convention and Sport Show to projects and programs that achieve goals of the organization’s “Save the Habitat. Save the Hunt.” initiative.
When the NWTF came into existence in 1972, its primary mission was to reintroduce wild turkey populations throughout the United States. Focusing much of their conservation efforts on public lands, the NWTF began partnering with government agencies in charge of managing public lands. Once reintroduction of wild turkey populations was accomplished, efforts turned to establishing and maintaining habitats for the stately birds. Recognizing the critical need for short leaf pine and oak savannas in providing wild turkey habits, it was only natural for the NWTF to look for leadership from the USDA Forest Service-regarded as leaders in the establishment of short leaf pine plantations and oak savannas. The desire to establish and maintain wild turkey habitat eventually led to a $300,000 project focusing on shortleaf restoration and establishment in Kentucky and high elevation oak woodlands/savannas in Tennessee as part of the Cumberland Plateau focal area.
The partnership between the NWTF and the DBNF intensified locally several years ago when state superfund grant money was used to establish vernal and ephemeral pools-temporary pools of water to help establish habitat for wildlife throughout the Daniel Boone National Forest in Pulaski and McCreary Counties. Later, the state chapter of NWTF bought protective tree seedling protectors for chestnut and superior hardwoods planted in the DBNF, Land Between the Lakes Recreation Area, and Green River Wildlife Management Area. In 2015, the two entities entered a challenge cost agreement for restoration and establishment of pine/oak woodlands. In McCreary County, the Beaver Creek Wildlife Management Area and a few locations in or near Rock Creek benefited from those tree planting efforts. As a result of a stewardship agreement, the NWTF also contracted the thinning of 167 acres here last year. The two groups have worked together to implement prescribed fires to improve and promote local habitat for wild turkey.

Additionally, the Stearns Ranger District and NWTF entered into a collection agreement in 2014 to restore and reposition the Keno shooting range, frequently used by McCreary Countians, which had been closed to the public for seven years due to safety concerns.
Since benefits have already resulted from the combined efforts of the USFS and NWTF, the partnership between the two entities is expected to grow. Locally, Metzmeier says he is looking forward to the implementation of more projects within McCreary County.
As an active member of the Southern KY Strutters, the local NWTF chapter, Metzmeier urges membership for all those interested in saving wild turkey habitat and preserving the ability to hunt wild turkey. The Strutters are active in promoting youth (JAKES) events as well as sponsoring events for handicapped hunters. The chapter places a special emphasis on women in the outdoors. The annual NWTF Southern KY Strutters Hunter Heritage Banquet, complete with gun raffles and both live and silent auctions, will be held at the Hal Rogers Fire Training Center at 180 Oak Leaf Lane in Somerset, KY at 6:00 p.m. on May 11, 2018. Many of the items available during the auction, including hunting gear, hunting related home décor, and jewelry, can be viewed at https://www.nwtf.org/…/detail/2018-banquet-auction-package. There will also be merchandise from local businesses and vendors. The banquet is open to all with tickets costing $45.00 for single and $55.00 for a couple. Ticket price includes one annual membership fee to the NWTF and a subscription to the organization’s magazine. Money raised from the banquet is used to support outreach efforts including the sponsorship of events for youth, women, wounded warriors, and handicapped. For more information concerning the banquet or ticket purchase, contact Darrell Hall at 606-383-0411.
“We would like to have a good crowd for the banquet. We have a great time, and the money goes to a good cause. All we do with the local organization is in line with the NWTF mission,” Metzmeier remarked. “We work to provide habit for wild turkey and to help hunters.”