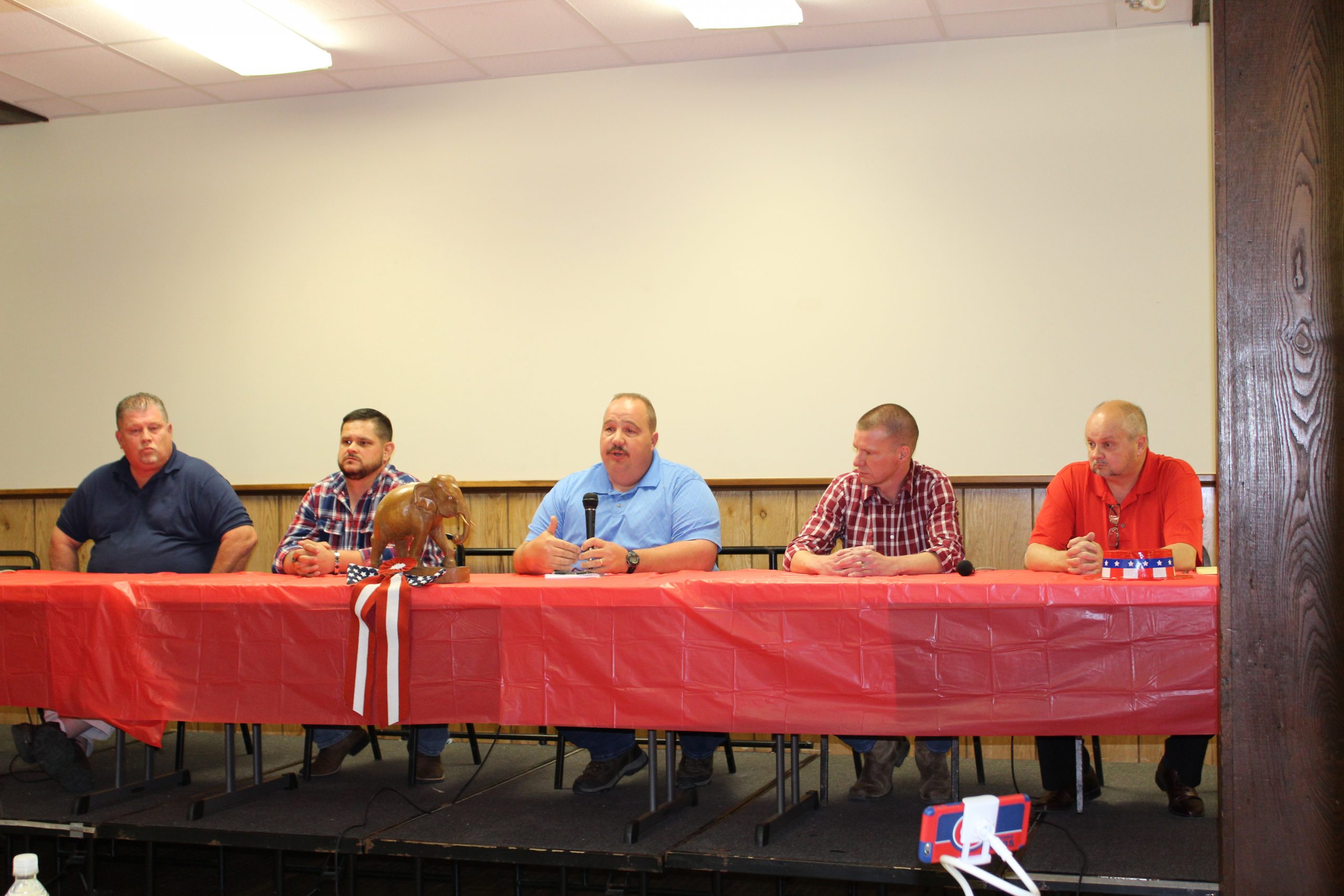 The McCreary County Republican Party hosted a Candidate Forum over the weekend, offering Magistrate Candidates from all four districts the opportunity to address the community and answer questions concerning several issues facing McCreary County today.
Over the next two weeks we will be presenting quotes and summaries of the candidate’s responses to the questions asked of them.
Friday night candidates from Districts 1 and 3 were on the panel, where they were asked about their thoughts and positions on several subjects, including the garbage service, business licenses, special taxing districts, economic development, tourism, the jail and others.
Here are some of their responses:
On the Jail situation:

Bill Hale, candidate for District 1, feels the length of prisoner transports is too long and the County needs to find a way to keep prisoners closer to home. “We have a long way to transport people and we have to eliminate that problem.”
“I would love to see us get a jail, but it is going to be a long, drawn-out process – if it’s even possible.”
Clayton Worley, District 3 candidate, thinks the possibility of reassigning funds from other areas could help promote growth and that could help the county working toward building a new jail.
“I think we could pull some money away from, maybe, Tourism, a little bit and try to help the county grow and that way we can get a jail started back.” He also thinks the transports are too long: “It’s a long way for people to go.”

Ronald King, District 3 candidate, feels the county should see what the forthcoming feasibility study on the jail before making any decisions. “I think the county does need a jail, but can the county support it?”

Grant Hasty, District 3 candidate, said he thinks the problem with the jail started long ago and those issues should be fixed before moving forward.
“The problem with the jail started out way back when and it should never have been in the condition it was in. We need to look at the root of why that was and the feasibility study is very important.”
Hasty also believes incorporating video conferencing between the jail and court should be looked at as a means to cut transport costs.

Bobby Strunk, District 3 candidate, thinks the county should look to closer counties for housing to eliminate the travel time and agreed that video conferencing should be looked at.

Their main goal if elected to office and encouraging economic development:

All candidates agreed that bringing more jobs to McCreary County would be a major focus of their tenure and the addition of a federally designated Opportunity Zone is a benefit toward development.
“The only way our tax base is going to increase is by getting jobs here,” Mr. King said. He felt offering tax incentives to companies looking to operate here will bring revenue through other taxes. “The people working will pay occupational taxes.”
“We have a golden opportunity to get some incentives in here and get people to back to work,” said Mr. Hasty. He also thought asking the federal government to release some land back to the county would help spur growth. He also felt the county needs to talk to local business leaders and look at other communities to learn from them and build off that knowledge. “Why can’t we do the same thing?”
“We have to get some jobs in here,” said Mr. Strunk. “I’m tired of seeing people have to drive to Somerset or Corbin to work.” He added the county has infrastructure in place to attract call centers. “We need to attract business. The Judge and Magistrates should call five companies a week to try and get some to come here.”
“We have to set some goals and put a plan together to get there,” said Mr. Hale. “We have to live within our means. And we need to work with the Judge to try to get jobs here.” He also feels that there are leaders in our own community that can provide insight and knowledge. “We all can learn from each other.”
“We have to get industry here,” said Mr.. Worley. “If industry comes – revenue will follow.” He also advocated the entire Fiscal Court should work together for a common goal.

On the role of a
Magistrate:

Mr. Worley feels magistrates should listen to the community and, with the Fiscal Court, go out and seek industry to bring to the county.
Mr. King thinks a magistrate’s role is to represent his district and talk to the people to do what is best for the whole community – not just a few individuals.
Mr. Hasty felt communication with his constituents is a key, and a magistrate needs to talk to the people to know what their wishes are.
Mr. Strunk said communication is important, and the Fiscal Court should work together and seek help from the state and federal government.

Mr. Hale feels the job of a magistrate is more complex than fixing roads, and it is more about managing taxpayer’s dollars wisely and listening to people.
“We have to be transparent and open minded. We have to listen because the greatest ideas come from outside and the people that work for you.”

On the Business
license and flea
market issue:

Mr. Hasty said he felt the business license is important to ensure fairness in business and the cost is not prohibitive and generates revenue.
Mr. Strunk felt the yard sale prohibitions are too much, as he knows several people who rely on the money to survive.
Mr. Hale believes the business license is a means to track business, but it needs to be “equal and fair.” He also felt yard sales should be exempt as long as they are not an every-day business.
Mr. Worley felt yard sales should be allowed to operate without a license, but people who purchase pallets for re-sale should be considered a business.
Mr. King agreed the license is necessary in some cases, but yard salers who operate once or twice a month shouldn’t be required to obtain one.

On mandatory garbage and the new garbage provider:

Mr. Worley feels the county should take a closer look at the current garbage contract, and has concerns over how Poff Carting is operating the transfer station.
Mr. King doesn’t agree with the mandatory clause, and believes the county should look in to how much is being charged at the transfer station.
“McCreary County just doesn’t accept mandatory anything,” he said. “We need to look in to something where we can get a better handle on what they are charging.”
Mr. Hasty thinks the county should review the contract, and start looking toward the next contact sooner to try and get a better deal for the county. He also feels the transfer station should be more accessible and the county need to raise concerns with Poff Carting.
Mr. Strunk feels the garbage contract should have been “shopped around” to more companies to get a better deal.
Mr. Hale said we need garbage service, but feels there wasn’t enough effort to find the right company and would like the County Attorney to review the contract.

“It’s hard for me to understand how an appointed panel has the authority to raise our taxes with no repercussions,” Mr. King said. “The people and county should have a say.”
“Communication and accountability is key,” said Mr. Hasty. He feels the Fiscal Court should meet with each of the boards to share information and be open and transparent on how the money is spent.
Mr. Strunk agreed, saying: “The county needs to talk to the boards,” he said. “We should know what they are proposing.”
Mr. Hale said he is not in favor of creating any new boards with taxing ability until other issues get resolved and the boards need to communicate. “We need to know, and so does the public, what they do with the money, so when the time comes they need more we can all try to understand.”
“Communication and transparency,” said Mr. Worley. “No more boards until we get a better handle on the budget.” He also feels the community needs to be involved in decisions.

Mr. Hasty said he feels efforts to promote the county needs to continue, but work needs to be done to develop campgrounds and other attractions to encourage people to not only visit, but stay in the community. “We need some things to attract them.”
Mr. Strunk agreed and added efforts to clean the roadways to make the area more attractive. “People are coming, but they don’t stay.” He also advocated developing more weekend-long events to get people to visit and stay.
Mr. Hale stated the internet is a key in promoting McCreary County and efforts should be done to get local attractions on more search engines.

Mr. Worley said he feels we need to encourage more and better motels and campgrounds for visitors and to develop more attractions to encourage longer stays.
“Tourism isn’t effective if they come in – look at what we got – and then leave,” said Mr. King who advocates better promotion and developing better places for tourists to stay.
Next week we will feature the candidates from District’s 2 and 4 as well as Coroner.