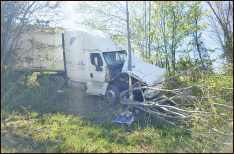 Photos by Greg Bird and Somerset Haz-Mat
A tractor-trailer accident Monday afternoon caused traffic issues as a portion of U.S. 27 south of Pine Knot had to be closed for several hours to remove the damaged vehicle. According to the Kentucky State Police the driver of the semi was traveling northbound when he apparently blacked out, causing his rig to run off the road, taking out several yards of a guard rail in the process. The driver was not seriously injured in the accident, but State Police say driver fatigue may be an issue in the crash. The Somerset/Pulaski County Special Response team was dispatched to contain a fuel leak. The South McCreary Fire Department and EMS assisted at the scene.