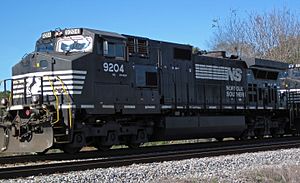 Magistrate Jason Mann arranged the call, who along with Judge Executive Doug Stephens and Sheriff Randy Waters detailed their concerns with blockages in recent months.
Noting recent events at Century Lane in Pine Knot, Judge Stephens noted about 60 individuals live on the road and have no other avenues to cross the track when a train is blocking the crossing. He also noted blockages at Mt. Pleasant Road and other areas in the county that have lasted in excess of two hours at a time.
Noting the potential liability and safety concerns, Stephens asked what the railway could do to alleviate the amount of time trains are stopped there.
“Our primary focus is the safety of the people on the other side of the track,” Stephens said.
Derek Sublette, Government Relations Manager with Norfolk Southern, stated the railway company has been dealing with congestion and operational changes in the past months and he hoped things will change soon that will prevent further disruptions.
“We don’t want our trains stopping anywhere,” Sublette said,” particularly at any crossings. Long term we are very optimistic we can get some fluidity on the network.”
Sublette said he would further speak with dispatch and operations personnel to try and find solutions. He will also visit personally with county officials later this month and visit the crossings to see what could be done in the future.
Judge Stephens suggested re-opening a crossing north of Century Lane to be used when a train is stopped. Sublette said that could be a consideration.
An arraignment for Norfolk Southern is set for May 31 in McCreary County District Court on the charges brought recently by the Sheriff.
Ironically, that same evening, another Norfolk Southern train was issued citations by a Deputy for blocking intersections for more than two hours.