A Corbin man faces 30 years in jail after being convicted of attempting to initiate a murder-for-hire scheme and other charges. 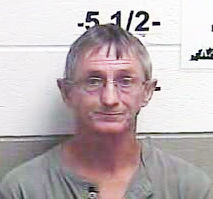 William Timothy Sutton, 55, was sentenced last week by United States District Court Judge Gregory Van Tatenhove following his conviction by jury in January on four counts of interstate murder-for-hire and one count of possession of firearms by a convicted felon.
According to the United States Department of Justice Sutton was incarcerated in the Whitley County Detention Center in March 2017 when he offered to pay a fellow inmate to murder the Whitley County Attorney, the Whitley/McCreary Commonwealths Attorney and two ex-girlfriends. It was shown during the trial that Sutton mailed a letter to a relative from jail asking to provide one of Sutton’s firearms to the would-be assassin to perpetuate the scheme.
Once law enforcement discovered the plot, Sutton was arrested.
He was sentenced to 360 moths in federal prison. Sutton must serve at least 85 percent of his sentence, and will be under the supervision of the United States Probation Office for three years after his release.