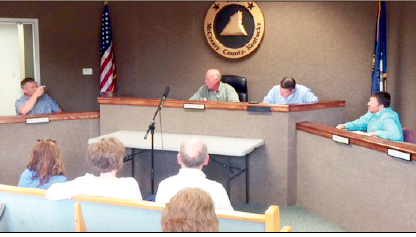 Living up to his word, Magistrate Jason Mann voted against continuing efforts to dissolve the McCreary County Extension Board and negotiated a compromise for a lower tax rate from the Board for the coming year.
Last Thursday’s Fiscal Court Meeting saw Mann’s and Judge Executive Doug Stephens’ dissenting vote derail the current plan to dissolve the Board and place funding for the service back in to the General Fund.
Mann had promised to vote against dissolvement after a majority of voters from his district attended a public hearing last month and voiced their opposition to the plans to eliminate the Board.
When Judge Executive Doug Stephens posed the question: “shall we continue process of dissolving the District Extension Board?” Mann voted no, putting two votes against the action. Since the law requires a four-fifths majority vote to abolish such a board, the process to remove the board has effectively ceased for the time being.
Following the vote Magistrate Roger Phillips, who had been primarily leading the charge to abolish the Board asked Stephens and Mann to discuss their proposed compromise, stating he had heard two different proposals: one concerning dropping the motor vehicle aspect part of the tax, and the second setting a rate that would net the Board a certain amount of funding.
Phillips stated he had obtained a total of the amount paid to the Extension Board with motor vehicle taxes, stating they only had received $10,500 for the year, by far a small percentage of the total taxes they stood to receive from property taxes.
Judge Stephens stated no compromise had been made at that time, noting the Extension Board was due to meet the following Monday night where they were expected to contemplate the issue.
Mann said he did what he said he would do, and was willing to compromise with the Board to lower the tax rate instead of abolishing it completely.
“You’re willing to give them what they want it sounds like to me,” Phillips countered.
“I’m bailing you guys out of this mess,” an exasperated Mann interjected.
Phillips replied: “You ain’t bailing me out of nothing.”
Judge Stephens interjected, cutting off further discussion by stating the process was still ongoing and the Extension Board was to meet Monday
On Monday night Mann and Stephens met with the McCreary County Extension Board to discuss the compromise, which would fulfill the Magistrate’s promise to lower the Board’s tax rate for the coming year.
During the meeting it was revealed that the Extension Board had received nearly $144,000 in tax revenues to that point for the year. A few outstanding accounts were still expected to be paid before the end of the fiscal year, which would put total collections at about $170,000, more than 10 percent below the state estimate of $192,000 when the tax was first passed.
The Board stated they were concerned with state funding cuts, referencing a letter sent to all extension services across the state from Dr. Gary Palmer, Associate Dean of Extension for the University of Kentucky. The letter reportedly warned the services that budgets are going to get tight and to possibly expect local offices having to fund more at the county level.
The Board is also expecting the university to assess local offices a fee for services used in the past. Extension Agent Greg Whitis said he was unsure of how much the assessment could cost, but was told it could be as much as $40,000.
Magistrate Mann stated he had heard more complaints about the tax on motor vehicles and personal watercraft and wanted to eliminate that aspect of the tax.
“That was the main issue I had with the tax, not the property,” he said. His reasoning behind asking to eliminate the motor vehicle tax was people who drive vehicles for a living, and felt removing that tax would have a positive benefit.
Mann then suggested a budget amount he felt he would be comfortable with for the Board and recommended the Board set their tax rate to meet that figure.
Mann’s suggested budget was about $141,000 for the year.
Based on current property values that rate would be about .375 cents per $100 of value. That rate could be slightly more or less based on the end of the fiscal year property assessments.
The actual projected revenue from that tax rate would be about $167,000 annually. After collection costs and factoring in about 10 percent of uncollectable taxes the actual projected collection for next year with that tax rate would be about $141,277.
The Board voted unanimously to set their tax rate for the coming year at a rate that would bring in that amount. That process is expected to take place in September, after the state finalizes assessments for the counties.
Motor vehicle taxes, which run from January through December, will still be collected by the Board until the end of the year, but be off the tax rolls after January 1, 2019.
Though Mann’s action Thursday did effectively stop the current plan to dissolve the Board, there is nothing preventing the Fiscal Court from addressing the issue again at a later date.
With a new Judge Executive and three new Magistrates to take seats on the Fiscal Court at the start of next year, it could be very possible the new court would want to readdress the issue and start the process anew.