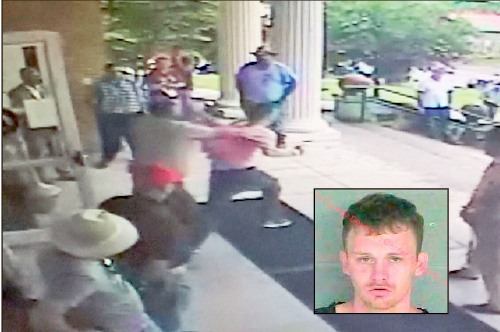 Photo courtesy MCSO
Courthouse security camera footage shows the moment Trevor Phillips was captured by security officers in front of a crowd gathered for a Master Commissioner’s sale on the front steps.

A suspect appearing at a Court hearing on Monday faces additional charges after reportedly failing a drug test and attempting to escape.
Trevor Drake Phillips, 27, of Parkers Lake was appearing in District Court before Judge Dan Ballou when he was ordered to take a drug test. When the test came back positive for an unknown substance Phillips reportedly ran from the courtroom and out the front door of the courthouse.
Court Security Officer James Ross managed to catch the subject and take him to the ground. While Deputy Ross was attempting to restrain the subject, Phillips continued to struggle, kicking CSO Deputy Gen Whittington in the process. Along with CSO Deputy Megan Neal, the three Deputies managed to cuff Phillips, who began shouting and cursing.
Phillips continued to fight with officers as he appeared before Judge Ballou who remanded him in to custody.
Phillips was charged with escape, resisting arrest and disorderly conduct in addition to contempt charges for the failed drug test.
He was lodged in the Leslie County Detention Center. An arraignment on the additional charges has been set for June 28.