Cancellation of BSFSRY excursions could continue through mid-July 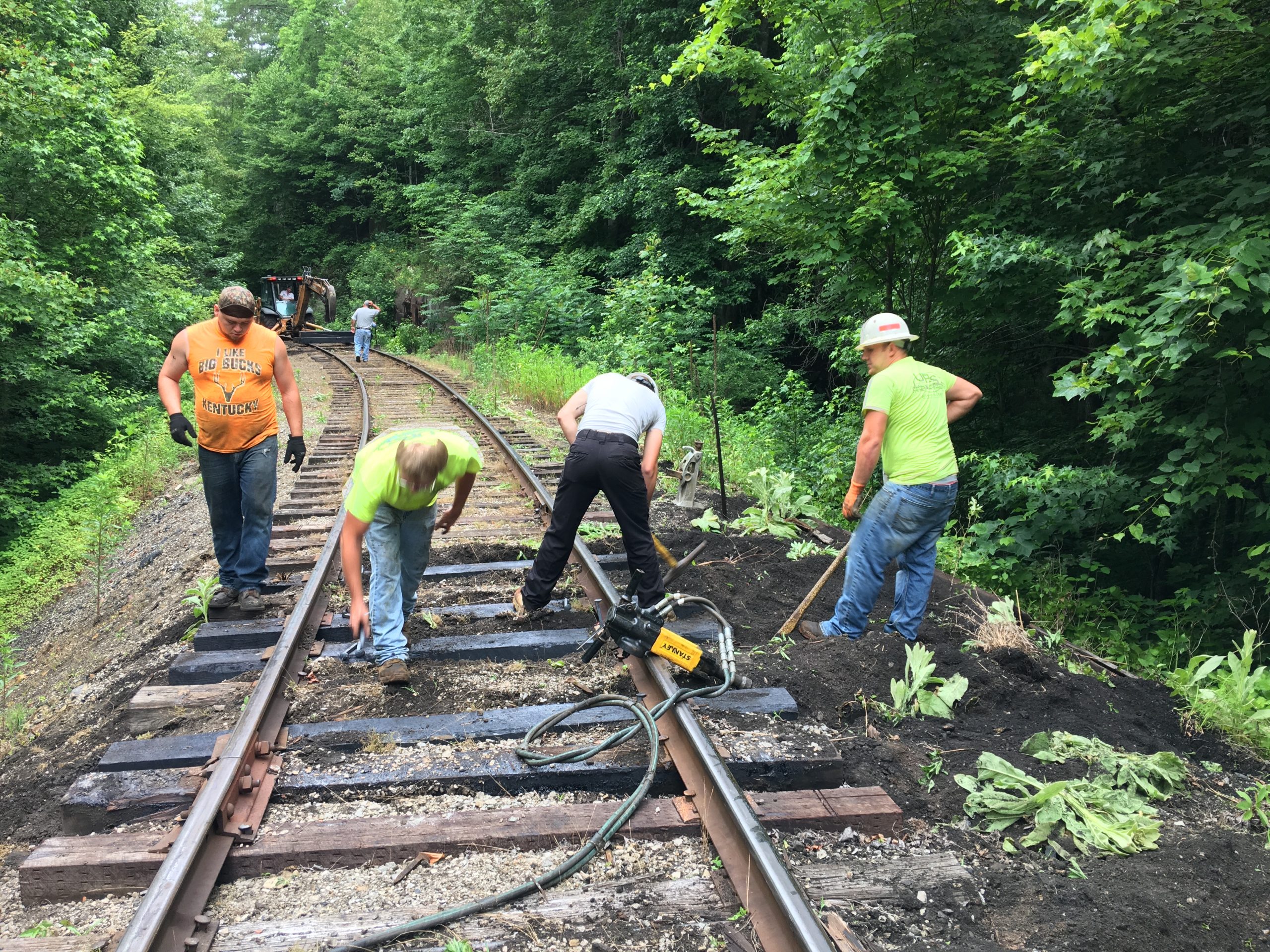 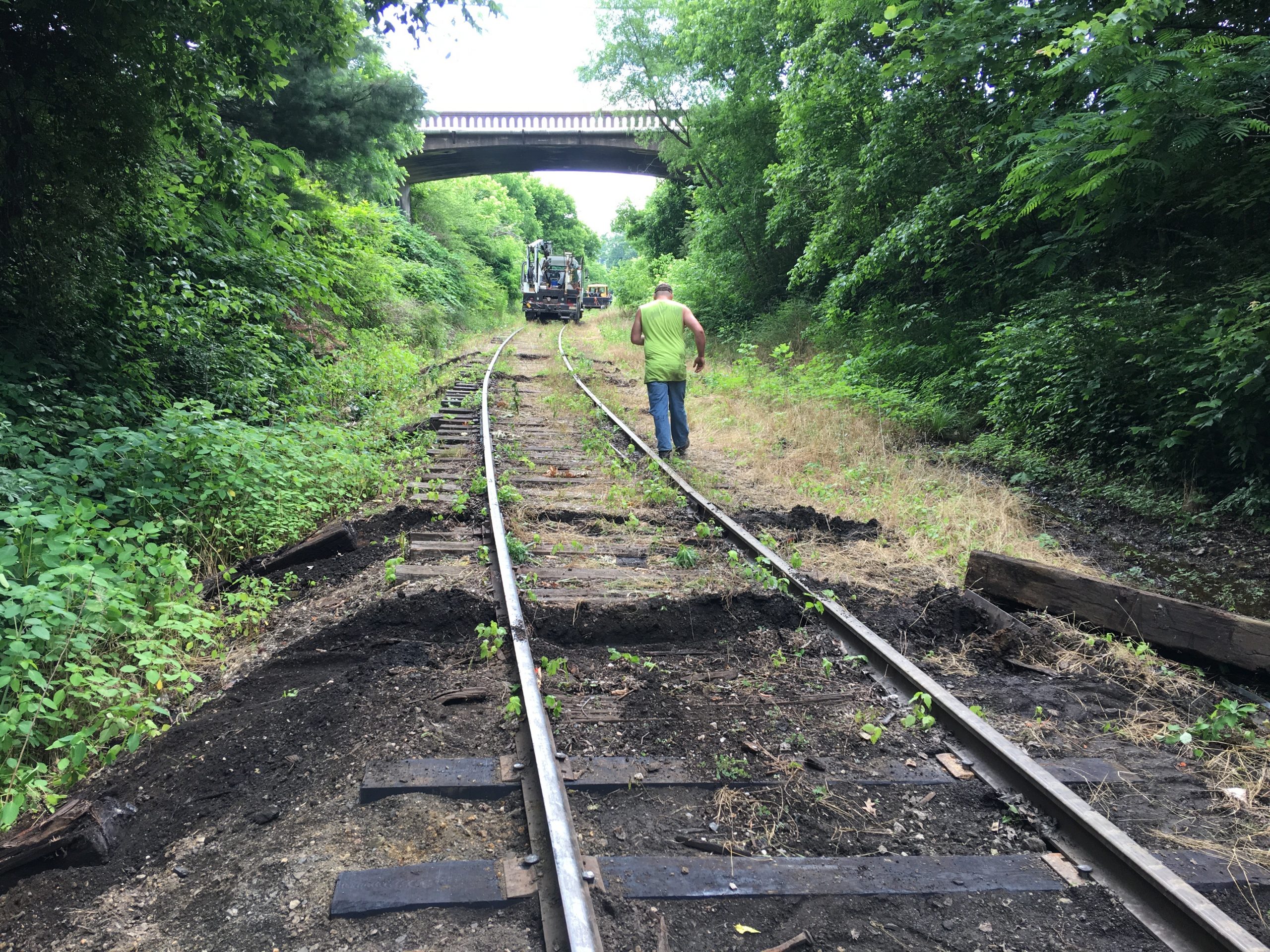 Crews have been performing maintenance on the tracks at the Big South Fork Scenic Railway.

The familiar sound of a train whistle blowing as the Big South Fork Scenic Railway’s Engine #106 departs and returns to the Stearns Depot as part of its’ round trip trek down the K & T line to Blue Heron has been noticeably absent this summer. With the train’s excursions cancelled since early June to allow for the completion of necessary track maintenance, those living in the area have noticed not only the absence of a blowing train whistle but the absence of tourists as well.
According to Big South Fork Scenic Railway (BSFSRY) Executive Director Lou Capwell, BSFSRY train excursions have been cancelled for several weeks due to heavy rains necessitating track repairs be done simultaneously at many points across the line.
“We’re frustrated we had to pause our season to repair our tracks over the past few weeks,” Capwell admitted. “However, passenger safety is always the number one priority. Doing this work now ensures a successful summer and fall plus another great Polar Express season beginning the weekend of Thanksgiving.”
Capwell stated most of the necessary maintenance concerned the ballast (gravel roadbed) beneath the track.
“Over the years, railroad tracks settle, and you occasionally need to raise the level of the rails up, especially in curves,” Capwell explained. “Because our tracks were laid for steam engines, all of the curves are super elevated to allow for an unfathomable speed of 40 mph. Back in the day on the K & T, 40 mph was a typical speed and the banking kept the water level of the locomotives level as it traversed the curve. Given that today we run at speeds of 10-12 mph, that banking actually has the opposite effect for our trains. Instead of speed causing the train to push laterally into the high side of the track, it actually slides down and pushes on the low side. As that happens, it cause premature wear on our ties (wooden timbers) and our ballast. The simple fix is to lift the track up, pile more gravel underneath it, and level out the curves. It’s currently being done with two rolling, track-mounted machines: a tamper, which shovels rock under the tracks as it jacks them up, and a ballast regulator which cleans up the rock and dresses up the track a bit. Rock is spread by a track-mounted dump truck.”
Capwell explained the BSFSRY’s lengthy downtime is due to a variety of factors-including scope of the project, nature of the work, hectic schedule of United Rail (contractor assisting with maintenance and repairs), and recent heavy rains.
Although the initial cancellation of train excursions occurred almost immediately following a scheduled inspection by the Federal Railway Administration (FRA), Capwell said the FRA did not shut down the railroad.
“They (FRA) didn’t shut our railroad down,” Capwell remarked. “Annually, the FRA inspects our railroad and every other railroad in the USA. They log various defects and points of concern every time they spend time here, as they do everywhere. As for violations, we had one clerical violation (inspection record-keeping) and one track violation which was repaired two days after our inspection.”
Capwell said the FRA does not have to inspect the tracks before reopening the railway.
“The FRA doesn’t need to inspect our tracks before we run again,” Capwell stated. “They just need a regular, run-of-the-mill inspection from a certified track inspector, which we do regularly during our season anyway, as necessitated by law.”
Capwell is optimistic the BSFSRY will reopen by mid-July and does not foresee additional shutdowns during the remainder of the season. Noting routine maintenance is performed by the local track crew using picks, shovels, and strong backs, Capwell feels the railway’s curves are in good shape for years to come.
“Thanks to our close relationship with the FRA with their invaluable guidance on track maintenance and repair and our trusted contractor, United Rail, we have been able to craft an effective plan for timely repairs on our line,” Capwell concluded. “We can’t wait to unveil this new and improved Big South Fork Scenic Railway to our guests.”