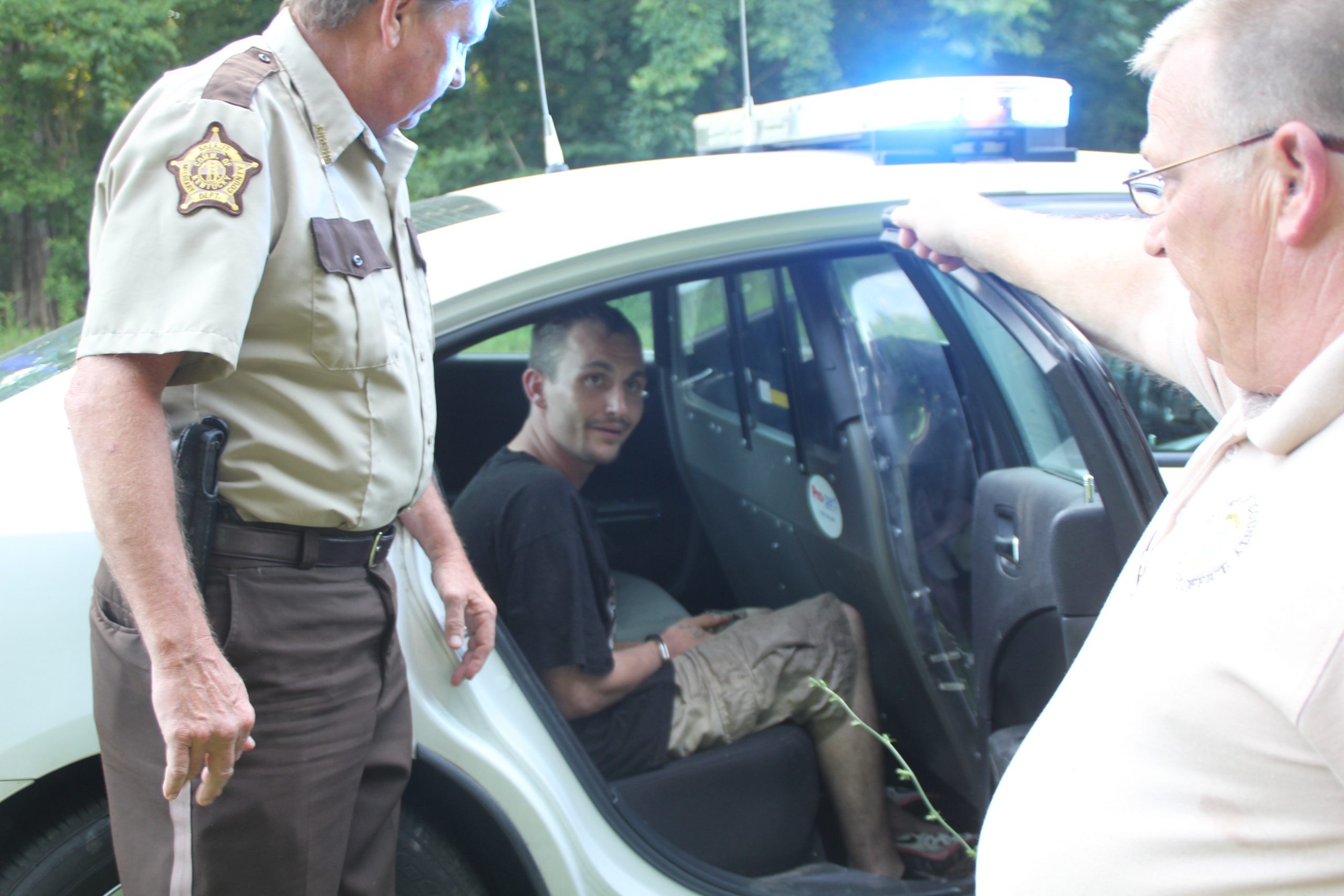 Photo by Greg Bird
Charles Kiser was taken into custody Tuesday morning after he reportedly stole two vehices while leading police on a wild chase. Kiser was one of two suspects arrested in the case, with a third still at large.

An Ohio man stole two vehicles early Tuesday morning and nearly ran over a McCreary County Sheriff’s Deputy after apparently thinking he was the subject of an attempted traffic stop.
Sheriff Randy Waters reports Charles J. Kiser, 30, of New Richmond, Ohio, is facing several serious charges, and a second suspect is still at large after jumping from a moving vehicle.
The Sheriff stated the incident started around 5:45 a.m. Tuesday morning when Deputy Dustin Ridner was on route to a report of a possible break in when he came up behind a Ford F150 pickup truck traveling northbound on U.S. 27. The Deputy was running with his lights and siren operating and was preparing to pass the vehicle.
Sheriff Waters stated the driver of the vehicle must have thought the deputy was attempting to pull them over, and began to speed up in an attempt to flee.
Deputy Ridner’s report states the truck began swerving along both sides of the highway, with someone throwing objects out of the window. The Deputy observed the vehicle swerve to the southbound lane shoulder and witnessed a passenger jump out of the still-moving vehicle. The truck continued on, swerving to the other side of the road, striking a guardrail. At that point a second occupant exited the vehicle and fled on foot. As the truck continued to travel northbound, the Deputy, thinking the truck was unmanned and out of control, positioned his cruiser to attempt to stop the vehicle. Before he could attempt a rolling stop, the truck came to a halt with two females still inside.
One of the females, identified as Ginelle A. Locke, 31, of Somerset, was found to be in possession of several baggies of marijuana, digital scales and a quantity of methamphetamine and was taken in to custody. The second subject claimed she was an unwilling participant and fully cooperated with officers during the investigation.
As the deputy was dealing with the two subjects in the vehicle, other officers were arriving at the scene and began searching for the two males who had fled the vehicle.
The first subject, who had jumped out of the moving vehicle, was still at large Wednesday morning, but officials have identified him and are in the process of obtaining a warrant for his arrest.
The second subject, identified as Kiser, had managed to steal a rollback truck and was attempting to flee the area. Sheriff Randy Waters and Deputy Tom Smith were stopped on Bolin Road when they observed the rollback traveling at them at a high rate of speed. The truck did not stop, and nearly hit Deputy Smith before he managed to jump out of its path. The stolen vehicle hit a tree and the officers attempted to take the subject in to custody. Kiser, refusing demands to surrender and attempting to escape prompting Deputy Smith to deploy his taser. The taser struck Kiser and caused him to roll over the hood of the stolen vehicle and drop down a short embankment. Before the officers could grab him, Kiser fled into the woods. A short time later he managed to make his way to Tucker Town Road where he stole a second vehicle and drove off southbound on to U.S. 27.
Kentucky State Police Trooper Craig Reed, responding to the scene, began a vehicle pursuit. Kiser crashed a short time later and was taken in to custody.
Kiser faces several serious charges, including: theft by unlawful taking (auto), wanton endangerment (police), disorderly conduct, resisting arrest, flee/evade (x2 – foot and vehicle), OUI, possession of a handgun by a convicted felon and other traffic offenses.
Locke was also arrested and charged with possession of a controlled substance, trafficking in marijuana, and possession of a handgun by a convicted felon.
Both were lodged in the Leslie County Detention Center.