Officers surround a home in Pine Knot where a man had barricaded himself threatening suicide. 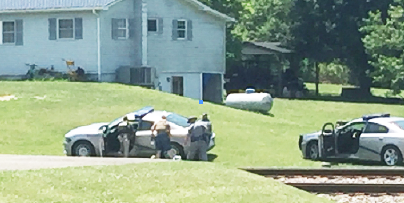 A tense standoff ended in tragedy Thursday night when a Pine Knot man reportedly took his own life. Kentucky State Police confirm that Randy Ellis, 53, died of an apparent self-inflicted gun shot wound after barricading himself in his residence for nearly 10 hours.
Officers were alerted around 12:37 p.m. Thursday afternoon of a man threatening to kill himself inside his residence. Officers from multiple agencies arrived at the scene and secured the area around the residence. Contact was made with the man through telephone, who declared his intent on shooting himself, and vowed to do so if any attempt was made to come inside the house.
For several hours police maintained contact with Ellis via phone, and attempted to negotiate terms for him to leave the house peacefully. The situation grew tense at one point when Ellis discharged his weapon, but he remained in contact with officers and stated he was just testing the weapon.
Despite repeated attempts to persuade the man to leave his home throughout the ordeal, Ellis refused to leave and claimed to have several weapons in the house and was willing to kill himself.
Shortly before 3:30 p.m. point officers managed to open a direct line of dialogue with Ellis through an open bedroom window. Officers attempted to persuade Ellis to come out of the residence for several minutes, but were unable to do so.
Around 3:50 p.m. officers sensed an opportunity to possibly secure the man and grabbed at Ellis, taking hold of his arm and removing his firearm, but Ellis managed to break free from the officer’s before he could be secured. Ellis retreated back in to the house and retrieved another weapon, prompting the officers to move back away from the residence once again to de-escalate the situation.
Officers re-took their ready positions away from the residence and continued to attempt to negotiate with Ellis, who had retrieved another firearm.
A KSP Special Response Team responded to the scene around 8:00 p.m. that evening and attempted to contact the victim and convince him to surrender. A warrant was obtained to enter the house after Ellis fired his weapon, causing a risk of harm to officers and others in the area.
At approximately 9:00 p.m. the specially trained team advanced toward the residence behind an armored vehicle equipped with a long ram on the front of the vehicle. The squad made several attempts to make contact with Ellis through the use of a loudspeaker, but received no response. At approximately 9:18 the vehicle moved forward and made a small breach through the front door, then backed off. Again, multiple attempts were made to contact Ellis, but as before, the man made no effort to respond. After several more minutes the vehicle moved forward again, making a larger entry into the residence, and repeated attempts to make contact were made.
Just before 10:00 p.m. a specialized robot equipped with a camera entered the residence in an apparent attempt to locate Ellis and make contact.
At 10:04 p.m. a single gunshot was heard from inside the residence.
A few minutes later the SRT squad made entry in to the home and found Ellis deceased.
The Kentucky State Police is conducting the investigation.
Ellis is survived by a wife, a daughter and two step sons.