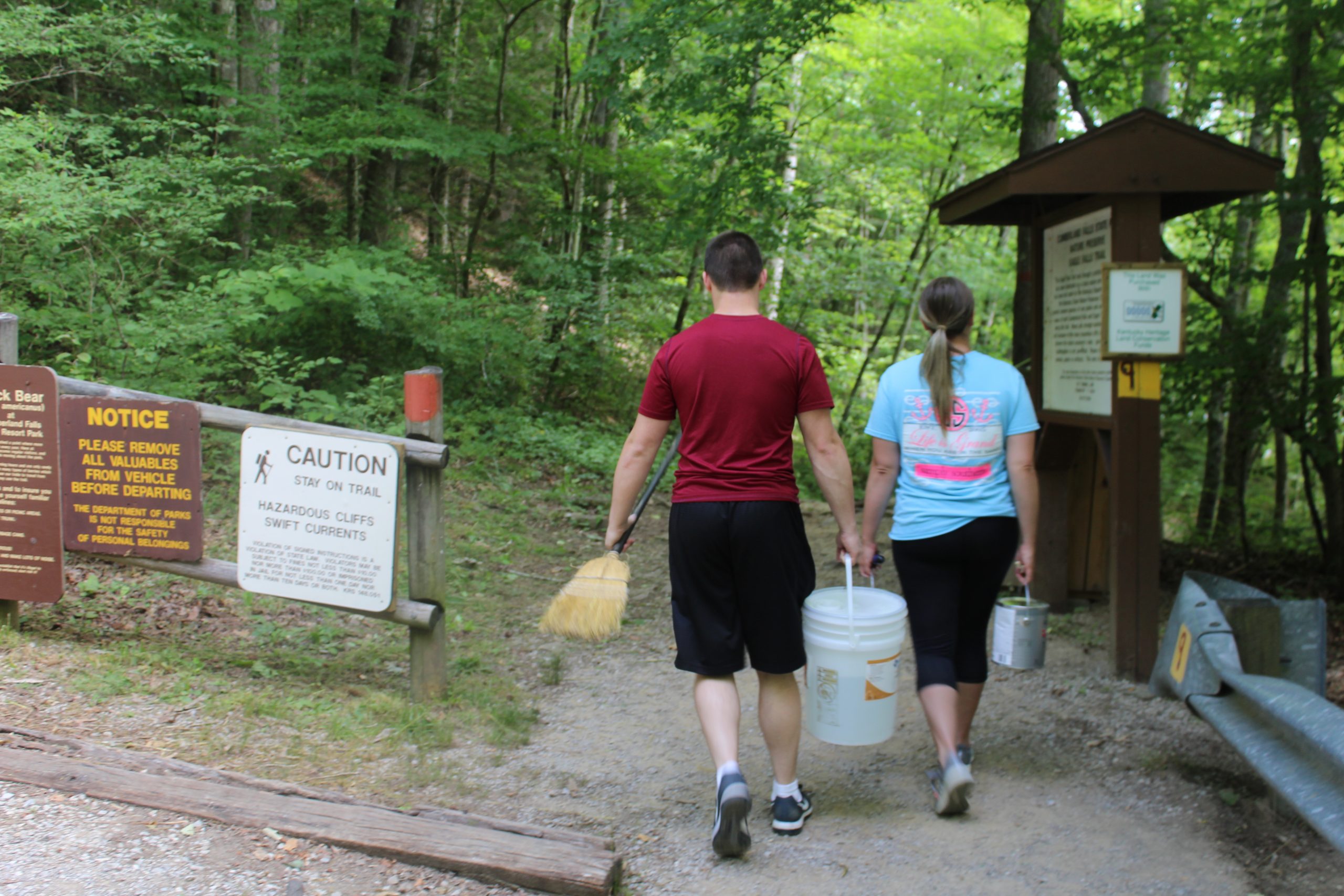 Photo by Eugenia Jones Minimizing graffiti and repairing vandalism within Cumberland Falls State Park as part of their community service time, Jake and Kate begin their trek to Eagle Falls with tools in hand.

We’ll call them Jake and Kate. For four years, the two have made a yearly visit, together as a couple, to Cumberland Falls State Park-a tradition they have kept ever since they began dating at the age of sixteen. During this year’s journey to the state park, the pair decided to add their second-ever hike to Eagle Falls-one of the park’s most popular hiking trails-to their annual outing. As a result, the young couple learned valuable-albeit painful- lessons about expressions of love-and how those expressions can sometimes hurt people, property, and even trees.
The incident leading to repercussions for the young couple began innocently enough. Jake and Kate hiked the Eagle Falls trail and were resting beneath a large sycamore tree, gazing up at the foliage, when suddenly they spotted initials etched into the bark of the sprawling tree. Simultaneously, the sweethearts also remembered seeing a friend’s Instagram post of a photo depicting carved initials in a tree. Deciding it would be fitting to leave a lasting legacy of their young love, the two used a small rock to carve JC + KH in the bark of the sycamore.
“It was definitely a copycat crime,” Kate explained. “We saw other initials, so we did it, too.”
As they scraped their initials on the sycamore, the pair noticed a stranger intently watching them.
“I always pay attention to my surroundings,” Kate said. “The man made me nervous. I didn’t know who he was or what he was doing, and we didn’t realize we were breaking the law by putting our initials on the tree.”
Unknown to Jake and Kate, the stranger used his cell phone to contact park law enforcement who greeted the couple as they walked out from the Eagle Falls area.
“We had no idea what was going on,” Jake remarked ruefully. “The officer wrote us a ticket for third degree criminal mischief, and now, here we are-cleaning up graffiti in the park for our court ordered community service.”
In addition to using paint, wire brushes, and other tools to negate graffiti and other remnants of vandalism throughout the park, the couple paid a fine to cover the cost of the damaged sycamore tree. In accepting their punishment, Kate and Jake are thankful they didn’t receive the maximum penalty of serving up to sixty days in jail. Kate is also grateful attorneys worked together to avoid repercussions to her current career and educational goals.
Pamela Gibson, with KY State Parks, supervised Jake and Kate’s community service component. As Cumberland Falls Trail Maintenance/Supervisor, Gibson sees the negative impact of vandalism on a regular basis.
“Vandalism includes everything from carved or painted graffiti on rocks, trees, and picnic tables to littering and breaking bottles in the water at Eagle Falls,” Gibson declared firmly. “It is illegal and there are various penalties-including hefty fines and jail time.”
“Leave no trace behind,” Gibson admonished. “We mean that when we say it. There should be no trace of visitors after they leave the park.”
Vandalism in public places is damaging in more ways than one.
First, it promotes disrespect for public property and prevents others from having a fully enjoyable visit.
“Vandalism shows disrespect for self and public property,” Gibson declared. “Destruction of public property prevents others from having access to facilities. In addition, who wants to see letters or pictures etched or spray painted on trees, rocks, picnic tables, or other public property? The irony is that those declarations of love-initials and hearts carved in trees or spray painted on rocks-usually last longer than the relationship does.”
Secondly, vandalism and littering create safety hazards.
“People who break glass in water or on land are creating a safety hazard,” Gibson noted. “Visitors who wade or swim are especially vulnerable to cuts made by broken glass thrown in the water. Vandals are a danger to themselves when they go off trail or attempt dangerous rock climbs just to spray paint some graffiti.”
Last but not least, vandalism can harm wildlife.
“Carving initials and hearts on a tree can kill the tree,” Gibson noted sadly. “The tree becomes open and vulnerable to disease and insects.”
Kate acknowledged her nephew as being the first one to educate her about the harm she and her boyfriend had done to the sycamore tree.
“My nine year old nephew loves wildlife and everything about nature,” Kate said. “I honestly didn’t know carving our initials would harm the tree. When I told my nephew what we had done to get in trouble, he let me know that we might have killed the tree. He was really upset with us.”
Gibson noted there are many ways to be creative in the park and to leave one’s mark for eternity-without being destructive and without resorting to graffiti.
“Come and volunteer to put up trail blazers or work with kids during activity programs,” Gibson challenged. “We do painting and other enjoyable activities with kids who are visiting the park, and we need volunteers to help lead these groups. There is so much that can be done that doesn’t involve destruction.”
As for Jake and Kate, the two sweethearts have learned their lesson.
“Now, we notice graffiti everywhere we go,” Kate observed. “We warn others about the danger of carving on trees and about the down side of vandalism in general. It takes a lot of hard, sweaty work to repair vandalism. We’ve learned that from our community service time.”