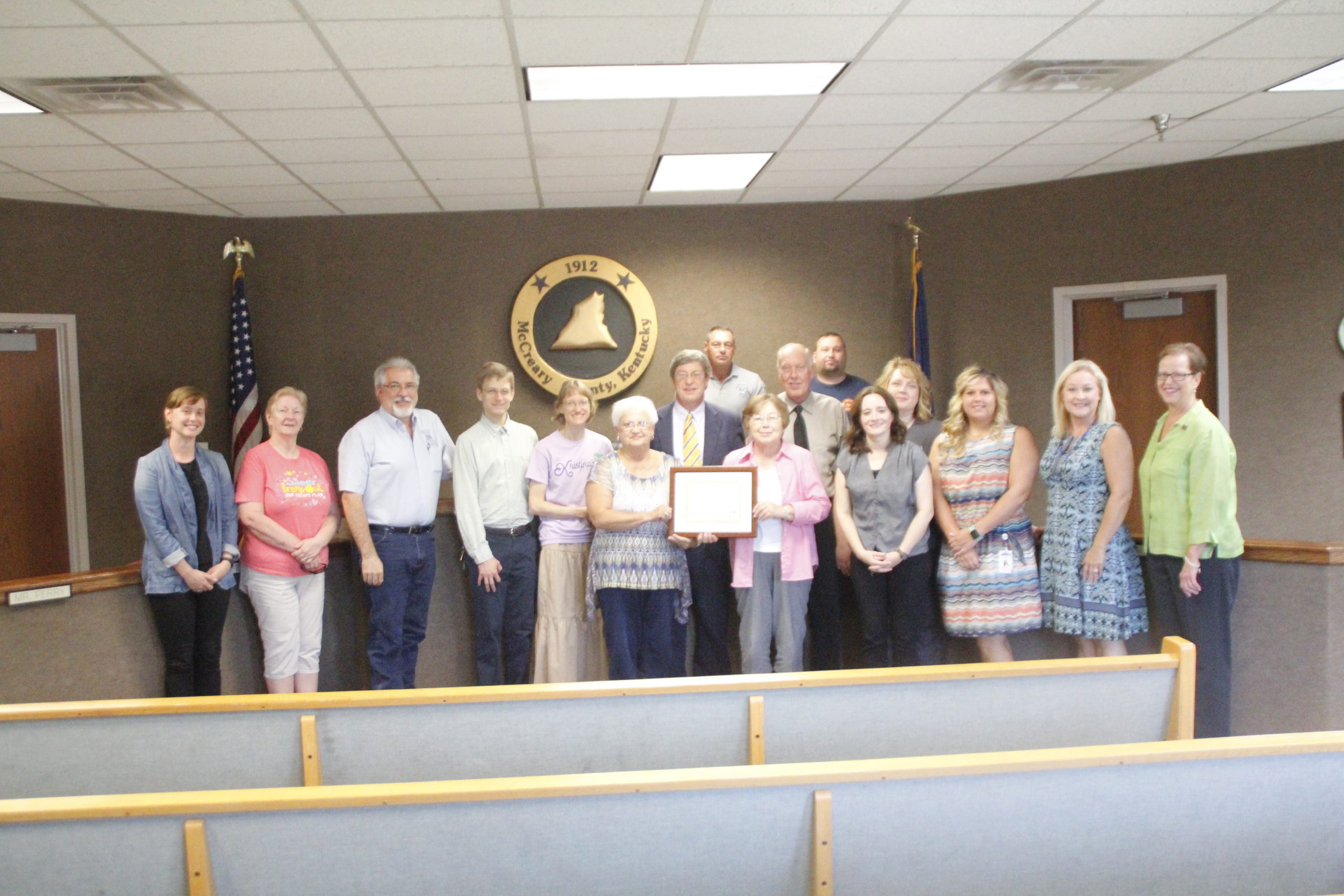 McCreary County, along with neighboring Wayne County, was named “Healthy Police Champions” by the Foundation for a Healthy Kentucky last week. The counties were identified as “bright spots” and representatives were presented with the Foundation’s Champion Award for their efforts.

McCreary County, along with neighboring Wayne County, was named “Healthy Police Champions” by the Foundation for a Healthy Kentucky last week. The counties were identified as “bright spots” and representatives were presented with the Foundation’s Champion Award for their efforts.
Ben Chandler, president and CEO of the Foundation for a Healthy Kentucky paid a visit to the McCreary County Courthouse last week to personally present the award to Judge Executive Doug Stephens and a host of community leaders.
The Foundation released the Bright Spots research last week, a study looking at Appalachian counties performing better than expected on health outcomes, including stroke deaths, drug overdoses and injury deaths. McCreary and Wayne were the only two Kentucky counties highlighted in the study.
Chandler pointed out community groups, such as the Christian Care Center, the Lord’s Gym, McCreary County Public Library and others as integral parts in promoting health locally.
“McCreary County performed so well in the study,” Chandler said Wednesday. “I’m as proud as I can be of this community. The collaboration you have engaged in to attain the levels of health you have is amazing.”
The study showed McCreary County performed better than expected on 14 out of 19 health outcomes measures. The report examined a statistical model of projected health outcomes based on population and income levels. McCreary and Wayne performed higher than projected on the majority of the fields measured.
“These outcomes can be credited largely to intra-county collaboration, stable community-focused nonprofits, strong and integrated health services and making health a shared value,” the Bright Spots McCreary County case study stated.
The study identified Library Director Kay Morrow, who is working to make downtown more walkable, Sue Singleton who operates the local food pantry and is advocating for a needle-exchange program, and Braxton King who runs the Lord’s Gym that provides support and preventive information on substance abuse as a few of the strong local leaders who are contributing to McCreary’s surprising health outcomes.
Judge Stephens also noted other community collaborators, such as the local Health District to promote a countywide smoke-fee ordinance and the McCreary County Extension Service and Grow Appalachia who promote healthy living and sustainable gardening.
“Different pieces of the puzzle have come together and contributed to this success,” Stephens said. “I appreciate every thing they all have done.”
Chandler agreed, noting a strong community is essential to a healthy community.
“This didn’t happen accidentally,” he said. “We want people to lead healthy lives.”
“Bright spots are communities that defy predictions for health outcomes given the challenges they face,” Chandler said in a release announcing the study results. “What’s happening in Wayne and McCreary Counties is changing our understanding of what is possible for health in these and other Appalachian counties. They show us that there’s always somewhere to start when working to improve health, and that dedicated individuals volunteering and working together with a few focused community leaders can change health outcomes for the better.”
Wayne County also saw better-than-expected outcomes in 16 of 19 measures. The study identified the Extension Service and local providers.
The Wayne County case study specifically referenced the work of Sally Sumner, director of the Hope Center, Jody Paver of the Extension Service, and Melissa Jones from Adanta, as well as the Rural Transit Enterprises Coordinated, the Wayne County Healthy Coalition, and the Wayne County Health Department in contributing to the health outcomes in the county.
“While both counties lag behind national rates on many health-related indicators, these local collaborative efforts have helped improve health, in some cases quite significantly, over what researchers expected,” Chandler said. “These successes can be credited to local Health Policy Champions, working in collaboration with each other.”
As a result of winning the award both McCreary and Wayne counties are eligible for the Healthy Kentucky Policy Champion of the Year award, which comes with a $5,000 grant to a Kentucky-based non-profit organization of the winner’s choice. The award will be announced this September at the Howard L. Boost Memorial Health Policy Forum in Lexington.
According to their website: “the mission of the nonpartisan Foundation for a Healthy Kentucky is to address the unmet health needs of Kentuckians by developing and influencing policy, improving access to care, reducing health risks and disparities, and promoting health equity. Since the Foundation opened its doors in 2001, it has invested more than $27 million in health policy research, advocacy, and demonstration project grants across the Commonwealth.”