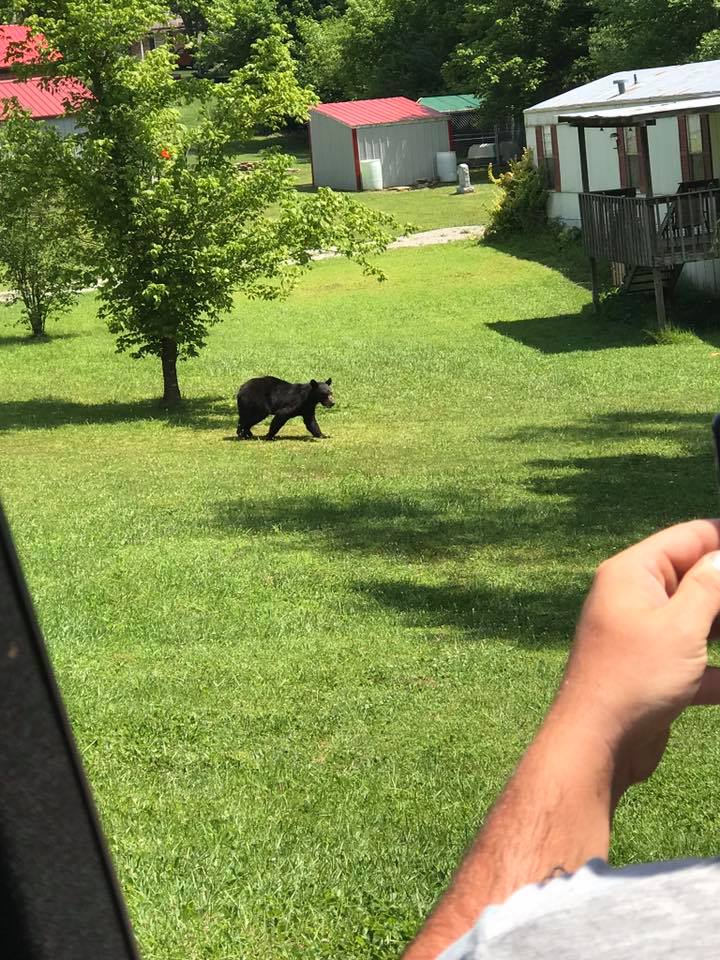 Residents urged to be proactive in avoiding nuisance bear situations

Photos of hungry black bears enjoying food retrieved from a local restaurant dumpster and a homeowner’s covered truck bed which were recently published by “The Voice” and posted on its Facebook page were apparently more than some of our readers could bear. As a result, several readers sounded off by sharing their own bear sighting photos as well as their comments (both positive and negative) and questions regarding local bear activity.
In an effort to answer our reader’s questions and concerns, “The Voice” spoke with local wildlife experts.
According to Kentucky Department of Fish and Wildlife biologist Mike Strunk, many problems with bears can be avoided.
“It’s a lot easier to take steps to avoid creating a nuisance bear problem than it is to correct it,” Strunk said. “Once a bear loses its natural fear of people and gets accustomed to looking for easy food sources created by humans, it’s hard to correct the problems that occur.”
Noting that over 90% of nuisance bear reports in Kentucky are garbage related, Strunk emphasized the importance of keeping garbage and food away from bears.
“If we could get a handle on our garbage problem, we would eliminate the bulk of our nuisance bear problems,” he noted.
Reminding the public that intentional or unintentional feeding of bears on public or private land is illegal and punishable by fines and/or imprisonment, Strunk offered several tips for those wishing to avoid nuisance bears.
First, homeowners need to avoid keeping any type of garbage outside. Garbage for pick-up should not be placed road-side overnight but should, instead, be placed out on the day of pickup. Business owners can contact Kentucky Department of Fish and Wildlife for guidance on simple steps that can be taken to bear proof or their local solid waste officials about obtaining a bear proof dumpster for their business.
Pet food should be kept indoors, and animals being fed outdoors should be given only the amount of food they can eat. Automatic feeders are discouraged.
Food scraps should never be “tossed over the hill.”
Bird feeders should be taken down at night or hung high enough with rope so as to be out of reach of bears. (Bird feeders can be removed in the spring or summer since birds naturally have a ready supply of food.)
BBQ grills, picnic tables, etc. should be kept clean, and outside garbage cans should be rinsed thoroughly.
Electric fencing can be used to discourage bears from roaming around bee hives, gardens, and fruit trees.
Campers need to remember that food storage restrictions in the Daniel Boone National Forest and Big South Fork River and Recreation Area are strictly enforced. Food cannot be left unattended unless properly stored in (a.) bear resistant containers, (b.) a closed, motor vehicle with a solid top, a hard-body trailer, or suspended at least ten feet clear of the ground at all points and at least four feet horizontally from the supporting tree or pole and any other tree or pole adjacent to the support. The Forest Service also prohibits burning or burying any food, refuse, or bear attractant and requires any disposal of food or refuse be in bear-resistant trash containers.
Bears have highly developed sense of smell and remarkable memories. In hopes of finding a tasty treat, they will often return in the spring to garbage cans or other “easy” food sources found earlier in the fall. Bears are usually the ones who suffer the most once they become acclimated to humans and human food sources. These “James Dean” or “live fast, die young bears” tend to die younger because they don’t use their natural instincts and succumb to human-related problems such as being hit by automobiles.
“Young bear really don’t stand a chance,” Strunk said. “Once they get an easy meal and start depending on human food sources, such as trash, there is not a lot we can do to break the bad habits and save the younger animals as they get older. The bear is essentially receiving an easy meal as a reward and will return to the site until the food is removed.”
When responding to a bear complaint, officials first work with the landowner by providing technical assistance by phone or conducting a visit. Efforts are made to help the landowner correct the problem including the removal of any food sources, etc.
“Typically, if a landowner removes an attractant (food source, etc.), the bear will move on,” Strunk commented. “If the bear doesn’t leave after attractants are removed, we may try hazing the animal with non-lethal ammunition to break the habit of the bear getting food without negative consequences.”
While some might argue that learning to co-exist peacefully with black bears in McCreary County is more of a nuisance than it’s worth, wildlife officials point to the positive aspects of maintaining a black bear population.
“The presence of black bears is an important indicator that our forests are in great condition,” Strunk said. “The presence of bears indicates a healthy forest capable of supporting many of the wildlife species we all enjoy, such as White-tailed Deer, Wild Turkey, and song birds. The list goes on and on.”
U.S. Forest Service biologist Joe Metzmeier agreed.
“A bear running through the forest is not necessarily a bad thing,” Metzmeier commented. “It’s usually only when bears get rewarded with food that they become a problem. We have bears here. We hope people are able to enjoy them.”
Strunk encouraged the public to report bear sightings because those reports help wildlife management officials determine the location and number of bears in the area. Most importantly, Strunk stressed the importance of individuals reporting nuisance bears immediately.
“Immediately reporting a nuisance bear helps us help the landowner quickly,” Strunk said. “And it helps us assist the landowner correct any problem with a bear before it becomes impossible to solve.”