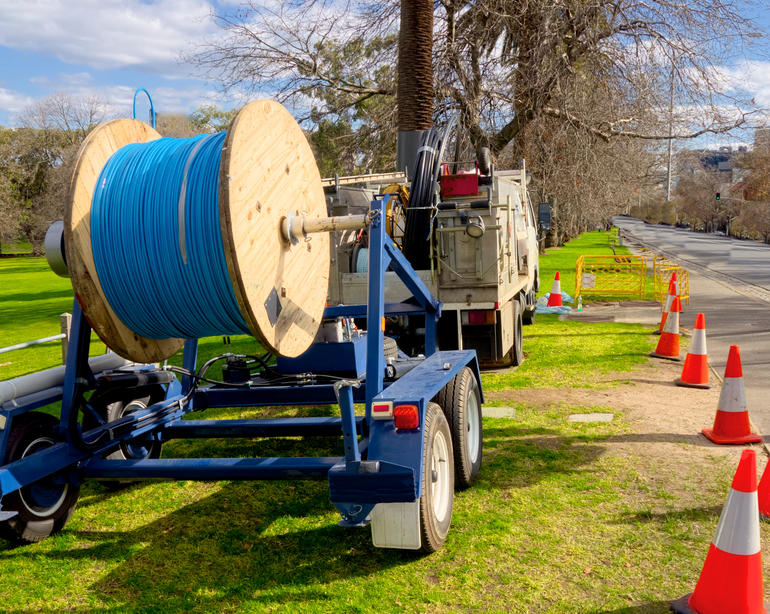 truck with a large reel of optical fibre being installed

Officials from the Center for Rural Development met with Judge Executive Doug Stephens last week to discuss the latest developments in the ongoing construction of the Kentucky Wired project.
Wired is a statewide initiative to provide open-access broadband network connections by establishing a high capacity fiber-optic network through each of Kentucky’s 120 counties.
The purpose of the project is described as promoting economic development, enhancing education and research and ensuring public safety by creating a stable and secure network that can be accessed by government and state offices. The network is designed to make Kentucky “a national leader in high-capacity internet service connections.”
With the fiber-optic cables running throughout the state, a safe and secure network will be created, with several “rings” of connections to provide built in redundancy – preventing major service interruptions.
Center officials Larry Combs and Jim Tackett said recent changes in laws should allow for the work on the statewide project to proceed at a faster pace. A projected completion date of late 2020 is now in place. Combs said the project was originally planned to be completed by now, but delays in construction and issues in Frankfort pushed back the operation.
Half of the infrastructure of the project will be dedicated to state government, such as courthouses, libraries and eventually school districts. The network will have an access link to the McCreary County Courthouse, where offices such as the County Court Clerk and Circuit Clerk will be tied in and have direct access to Frankfort and not need to contract with a local service provider, eliminating that cost for those offices. Libraries, hospitals and other offices will also share the connection.
School districts will also connect once a 5-year contract with AT&T expires.
The Kentucky Wired website (www.kentuckywired.ky.gov) states: “This means cities, partnerships, private companies or other groups may acquire access to these “middle-mile” lines, but the network will not be providing “last mile” services, or the lines that run to individual homes or businesses.”
The second half of the line will be for commercial development, such as internet service providers to contract to connect and provide local access for businesses and residents.

“It would still be up to the individual ISP to connect to the network and provide access to individual households,” Combs said.
In the event that a local provider, such as Highland Communications or Access Cable, do connect to the network, it should provide better connection and built-in redundancy – meaning less service loss and interruptions.
Recent work by Highland has already put fiber optic connections in place in most areas of McCreary County that would already have the ability to link to the new network and provide potentially cheaper service for local customers.
SOAR (Shaping Our Appalachian Region) has worked closely with Wired to assist development of the project in the region and a stated goal of the SOAR committee is to “develop and implement a structured approach to last mile development in the region.”
Combs and Tackett could not specifically comment on when the local work for Wired is to be completed and available for connection, but they did note construction is in progress on lines to Pulaski County at this time, implying local connection could be seen within a year to 18 months.