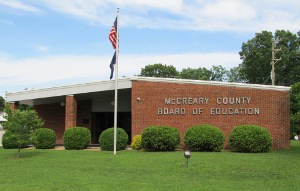 The McCreary County Board of Education, along with Superintendent Michael Cash and Middle School Principal Todd Waters have been named in a federal lawsuit alleging the McCreary County School District failed to adequately protect a student from bullying.
According to legal documents filed on August 14th in the United States District Court, Eastern District in London, John and Jane Doe, on the behalf of their daughter Mary Doe, contend their child was victim to bullying in the school system and District officials were “deliberately indifferent” to the actions of other students and teachers.
The names of the plaintiffs are presumably aliases used to protect identity of the minor student and her family from possible repercussions.
The suit alleges Mary is a student of the McCreary County School District with a known disability, and as such, was placed on an Individual Education Plan (IEP) in the fourth grade. As a result of her status, the child was subjected to a “pattern and practice of bullying” in the school system, the suit contends.
“Children with disabilities and/or an IEP in this school system are further mercilessly bullied by other students, with the full knowledge of school staff and administration,” the document reads. “Mary was constantly called names such as ‘retard’ and ‘stupid,’ and was further subjected to physical violence simply because of her disability.”
The family states they removed their child from the schools system and attempted to home school her in the fourth grade, but were visited by an unnamed Board member who “forced” them to re-enroll the child in the fifth grade.
“Upon her re-enrollment, the bullying only intensified, and a threat of rape was made against her on social media by a school student,” the lawsuit continues.

The family states the child approached a counselor to report the bullying, but was told he “can’t do anything about it.” The father also met with the counselor and was reportedly told the same.
Following the last incident “the disability-based bullying” intensified, the family charge. Three incidents of physical attacks reportedly occurred and reported to both Superintendent Cash and Principal Waters, but no action was taken.

At one point Mary Doe was allegedly photographed (presumably by a fellow student) in the girls locker room while in a state of undress. That photo was then supposedly shared on social media.
The lawsuit contends the photograph was reported to school authorities, but nothing was done to remedy the issue or punish the student who shared the photo.

Additionally, the suit contends, a local law enforcement officer (unnamed in the court filing) was also informed of the action. That officer not only refused to take any action, he or she also indicated that if the family continued to pursue the matter they could face retaliation.
The lawsuit also alleges two teachers also took part in bullying the student by shaming and harassing her in front of other students.
As a result of the bullying and lack of action by the District, the suit alleges, the family was forced to enroll the child in HomeBound education.
“Mary Doe, in addition to being denied educational opportunities, has also experienced severe mental anguish and distress of these instances culminating in suicide threats and intensive psychological counseling,” it concludes.
The suit contends the defendants violated the Americans with Disabilities Act and Rehabilitation Act by failing to take actions to prevent the bullying and committed negligence and gross negligence by not taking action to take all reasonable steps to prevent foreseeable harm to the students.
The family is seeking a jury trial as well as compensatory and punitive damages, court costs, legal fees and “any and all other relief…to which Plaintiff may appear entitled.”

According to court filings the defendants were officially notified of the lawsuit. Last week, during the Board’s regular meeting a half-hour executive session was held for “discussions of proposed or pending litigation against or on behalf of the public agency.”
No official action was taken following the executive session and the Board did not reveal the nature of the discussions. It is unclear if the meeting was related to the current lawsuit.

Lawyers for the school district has yet to file a response to the allegations in U.S. District Court and no hearing dates have been set.