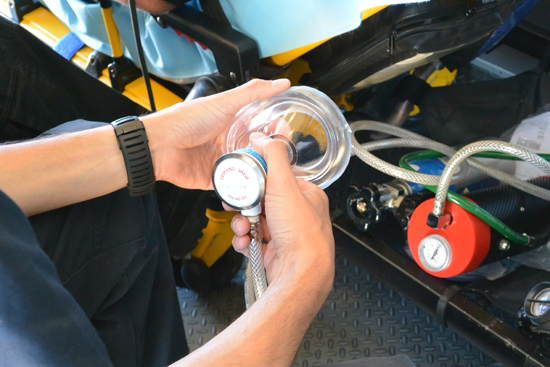 Nitrous Oxide: commonly known as laughing gas.
Hearing the term conjures images if old television shows where a visit to the dentist turns comical as the patient gets a dose of the notorious gas and breaks up in peals of laughter.
But the old comedy fodder will soon be a new weapon for pain management with local emergency medical personnel.
McCreary County EMS Director Jimmie Barnett announced last week that his department has obtained permission from the Kentucky Board of Emergency Medical Services (KBEMS) to implement a new protocol using the gas as a tool to help manage pain in patients.
When mixed with a 50 percent concentration of oxygen, the compound provides an inexpensive alternative to pain killing medications. The gas acts as a form of mild anesthetic, dulling pain receptors in the patient, while also maintaining consciousness.
The nitrous oxide helps relieve pain, reduces anxiety and is a mild sedative, something that could help a paramedic treat an injured patient without the need for other narcotics.
That benefit is not only cost effective – a bottle of the gas costs only about $40 – but it can also prevent potentially harmful interactions with other drugs that may be in a patient’s system.
“There are zero side effects,” Barnett said. “There are no interactions with other drugs that may be in the patient’s system, which makes it particularly effective in the field.”
“In this day and age you just don’t always know if someone has a drug in their system that could have a bad reaction to morphine or other pain relievers,” he added. “It’s another way to combat the problem we have here.”
Once in place the McCreary County Ambulance Service will be the first service in the state using the protocol, something Barnett thinks will lead to other services following the example.
He explained that all paramedics and advanced EMT’s already have training in how to use and administer the gas, but he will conduct a refresher course before implementing it in the ambulances.
The use of the gas will also be regulated and monitored to track and measure its effectiveness.
“Its an old remedy in a new field,” Barnett said.