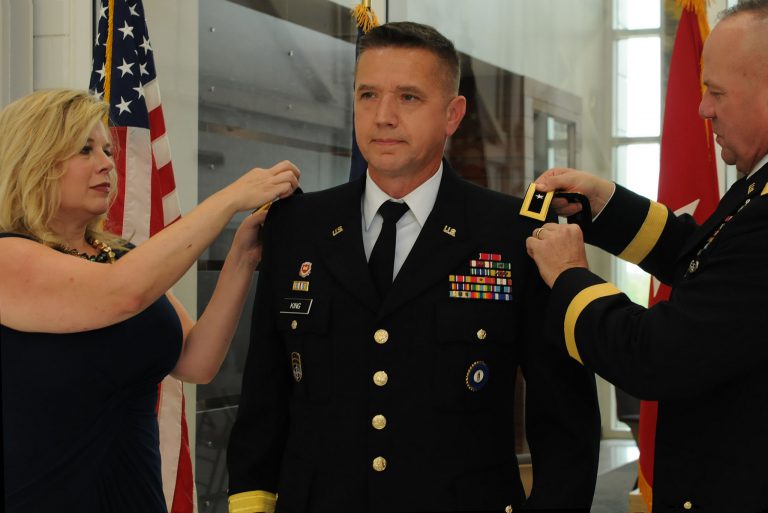 McCreary County native Steven T. King was promoted to the rank of Brigadier General last week during a special ceremony at the Army Aviation Support Facility in Frankfort.
With the promotion King will serve as the Deputy Division Commander of the 38th Infantry Division, based out of Indianapolis.
“With every opportunity comes an aspiration to make a great contribution,” King said. “As grateful as I am to receive this distinction, I recognize that this day is not just about me, it’s about every single person that has helped me get to this point.”
According to King’s biography he enlisted in the Kentucky Army National Guard as a Private First Class in 1984 and was promoted to Second Lieutenant in 1988. Since 2000 he has been a full-time Guardsman.
During the ceremony King recognized friends, family and mentors who helped him achieve his success.
“I recognize today that I am truly standing on the shoulders of so many others,” he said. “The men and women I’ve served alongside with have been an inspiration to me throughout my career.”

King recalled past missions serving with soldiers in overseas combat zones and at home in disaster response operations. He acknowledged his expanded role in leading soldiers and stressed his commitment to being a general officer in the Kentucky Guard.
“Our business is to train and equip service members and be as ready as we can be for the mission at hand.”

“I’ll keep three goals in mind; To leave the organization better than I found it, improve on past success and to always grow stronger and more resilient. That is our desire as soldiers and leaders, and it is that desire I will take into this next chapter.”
His wife, Becky and Adjutant General, Major General Stephen R. Hogan pinned King with his new rank insignia during the ceremony. His nephew, Chris King, also a member of the Kentucky National Guard, presented King with his General Officer Belt and flag.