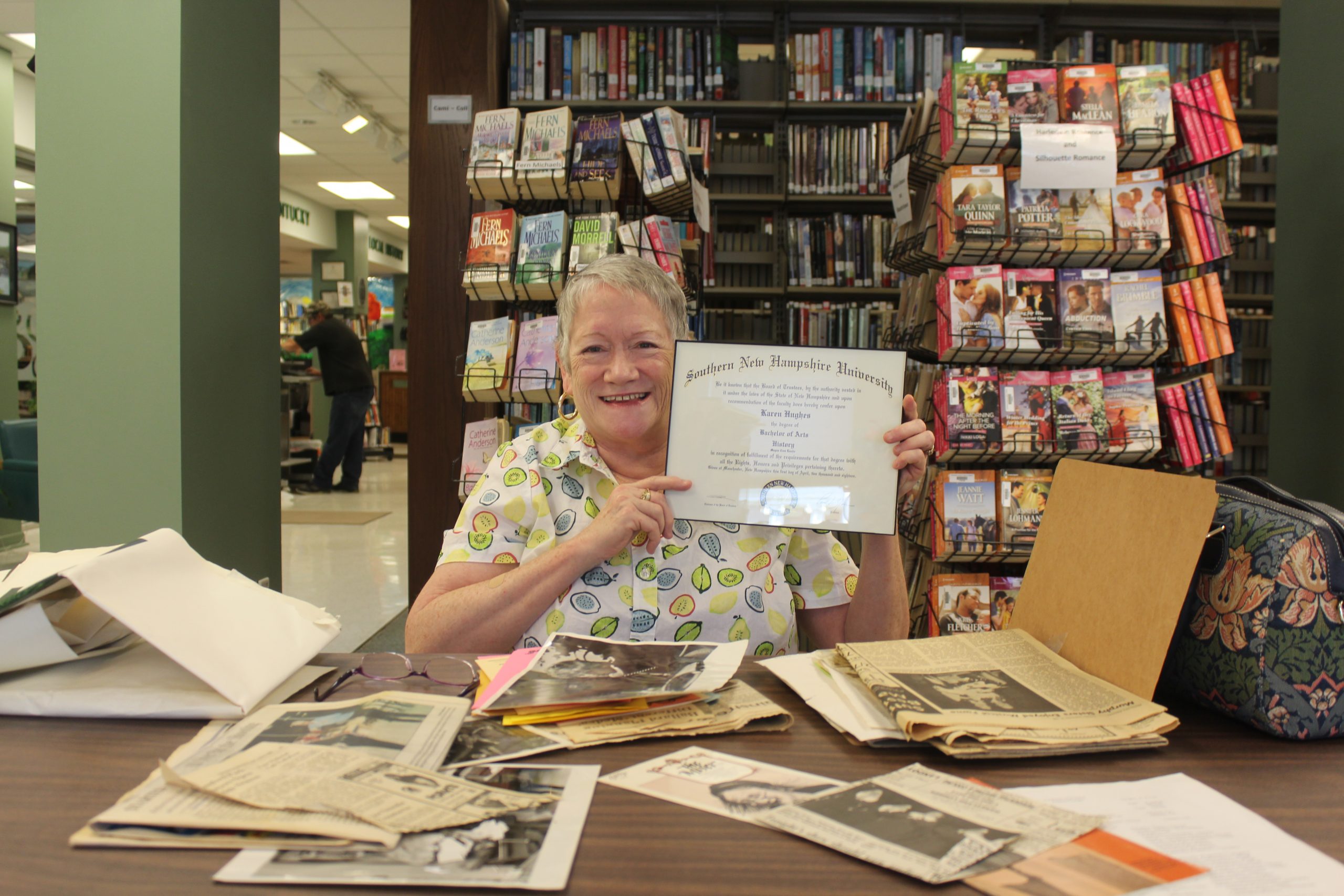 Karen Hughes is determined to live life to the fullest.

Many local residents know Karen Hughes as the smiling strawberry blonde who at one time worked for the McCreary County Public Library. She’s also known for her love of animals and being the proud momma of three rescue dogs, Tuckie, Bear, and Tater Bug. However, many do not realize the diversity of Hughes’ life experiences. Nor do they realize the depth of her determination to excel, learn, and explore new opportunities.
Although math was a bit of a struggle for Hughes, she took college preparatory classes in high school, including Latin. After graduating from high school in Atlanta, she enrolled at nearby Georgia State University. As an excellent typist who did well on the Civil Service test, Hughes began working for the federal government (Forest Service) during the daytime and continued her college studies at night. Hughes, the youngest employee in her office, was truly a youngster working in an adult world, and it wasn’t long before the lure of work pulled Karen away from her college studies. She decided to withdraw from school and wholeheartedly pursue her career.
Soon after, nineteen year old Hughes seized an opportunity to move to Arkansas to continue her work with the Forest Service.
“I figured I needed to move away from home at some point,” she remarked with a grin. “I learned to drive a standard Volkswagen bug, got my brother Roger (Vann) to help me pack things up, and away I went.”
Her brother’s help in moving would be needed again as Hughes’ career with the Forest Service fostered her restless nature by allowing her to move about like a gypsy from place to place. During her government tenure she worked as a tour guide at Blanchard Springs Caverns in Arkansas, in planning at the Atlanta, GA office, and in Cooperative Outdoor Education in Washington, D.C. It was in the Washington D. C. position that Karen became involved with the Woodsy Owl program and achieved a claim to fame by appearing in the Woodsy Owl costume on the national television program “Romper Room.” Hughes later worked as a Public Affairs Officer for the Forest Service in North Carolina (where she first experienced working with a Rainbow Gathering) and the Umpqua National Forest in Oregon. Her final position with the Forest Service was as the very first Public Affairs Officer for the Wayne National Forest in Ohio. There, she dealt with many issues including acting as a key player in one of the few National Forest court cases to ever go to the Supreme Court.
In 1997, Hughes, at the age of forty-six, retired early from her government position. Knowing she had options, Karen moved to her mother’s home place in McCreary County and soon began work at the McCreary County Public Library. During her stint at the library, Hughes was a bulldog-relentlessly assisting patrons with research on genealogy and other projects while at the same time working at the front desk and writing public service announcements. It was also there that Hughes became involved with community dinner theater in McCreary County.
Always drawn to acting, Hughes had, in her late teens, heeded her mother’s forceful advice.
“I’m tired of hearing you talk about acting,” Hughes’ mother, Naomi Murphy, demanded. “I want to see you do something about it.”
With her mother’s words echoing in her head, Hughes enrolled in classes and received professional training at the Academy Theatre, Theatre Atlanta Off-Peachtree, and Alliance Theater School in Atlanta, GA. She still cherishes the encouragement she received from professionals who saw her perform on stage.
“I remember Fred Chappell telling me that I “glow” on stage,” Hughes said with a smile. “It still makes me feel good when I remember him saying that.”
With her bubbly personality and desire to perform in front of the public, it is difficult to believe that Hughes always struggled with a lack of self-confidence. Fortunately, she refused to let insecurities stand in her way and went on to perform on stage throughout her life. Hughes’ wealth of experience on stage includes such theatre companies as Theatre Atlanta Off-Peachtree, Asheville Community Theatre, Smoky Mountain Repertory Theatre, the Montford Park Players, the Athenian Players Theatre and others. She also performed in Somerset Community College productions and is instrumental in McCreary County performing arts, including her directorship of the inaugural Polar Express production in Stearns in 2017.

Hughes always regretted her youthful decision to quit college without obtaining a degree in order to pursue her career. Motivated by an intense love of learning, she continued to “educate herself” by eagerly completing numerous college courses as she traveled around the country with her job. Finally, in her sixties and still insecure about her ability to demonstrate the math skills needed to receive a college degree, Hughes searched for a place where math wouldn’t keep her from pursuing her dream. She finally stumbled upon Southern New Hampshire University (SNHU) where the class “Heart of Mathematics” taught students to connect math skills with art, music, nature, and the Golden Ratio.
“It was neat,” Hughes said of the class. “For me, math finally clicked!”
By transferring credits from classes taken at other colleges and universities to Southern New Hampshire University and diligently completing two classes per term for several semesters at SNHU, Hughes finally, at 67 years old, graduated earlier this year with two degrees-an Associates and a Bachelors in History.
“At my age, people always wanted to know what I would do with a college degree,” Hughes said with a grin. “But really, do I have to do anything with it?”
Hughes isn’t sure what her next adventure will be. However, she has some good advice for young and old alike.
“I am going to learn something new every day,” she declared passionately. “A person should never put limitations on themselves. After all, a person is never too old, and it’s never too late to learn or try something new in life!”