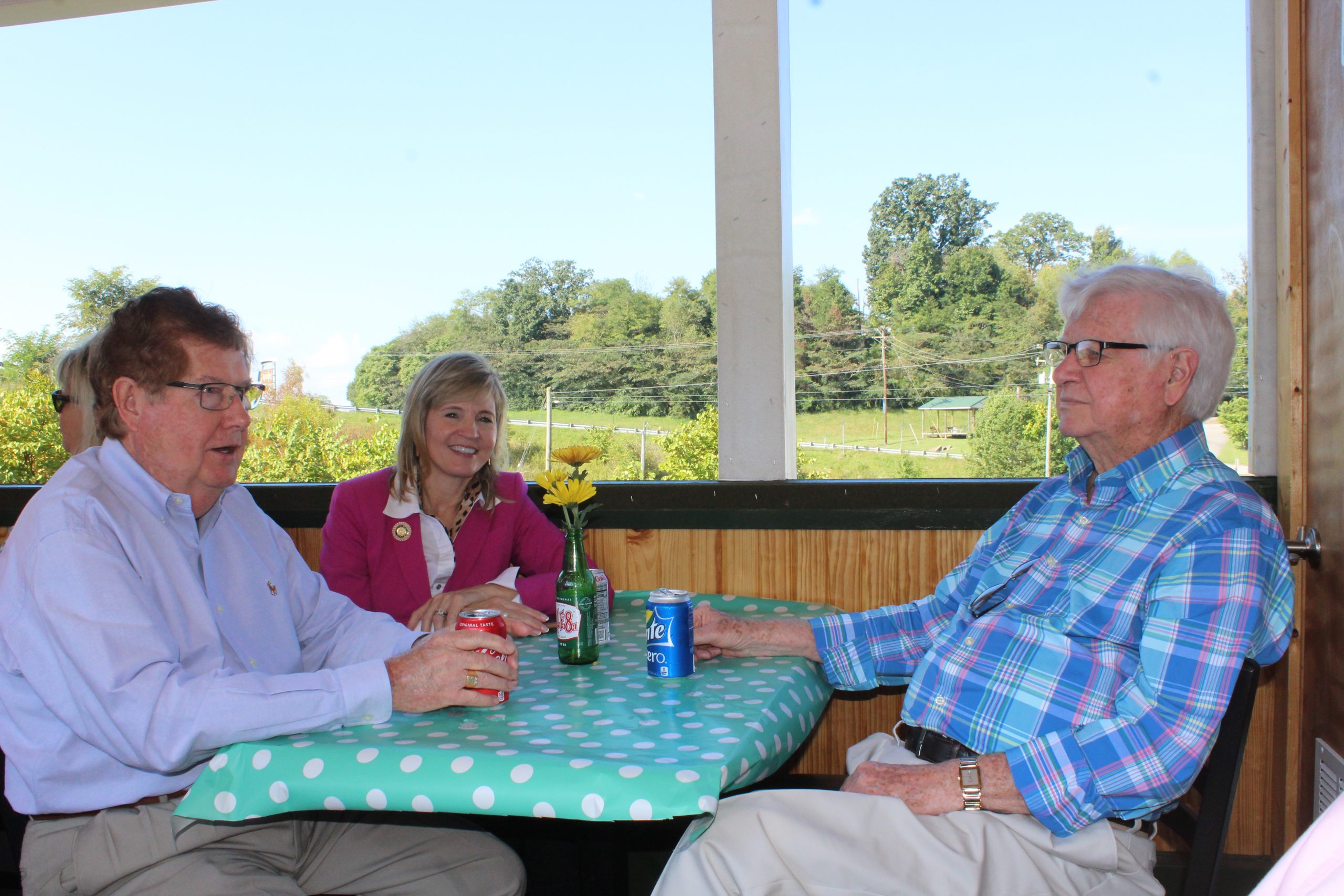 Photo by Eugenia Jones.
Following his announcement of a $1.1 million AML grant designated for Stearns revitalization, U.S. Congressman Hal Rogers and other guests took a ride on the Big South Fork Scenic Railway from Stearns to Blue Heron. Expressing his disappointment that Big South Fork National River and Recreation Area Superintendent Niki Nicholas was unable to attend the event, the Congressman pledged continued support for the development of McCreary County, Stearns, the Big South Fork Scenic Railway, and the Big South Fork National River and Recreation Area. Nicholas told “The Voice” she did not receive notification until shortly prior to the event and was unaware the Congressman was attending. Had she know, Nicholas stated she would have rearranged her schedule to attend the event.

U. S. Representative Harold “Hal” Rogers (KY-05 District) visited McCreary County last week to announce a $1.1 million Abandoned Mind Lands (AML) grant awarded to the McCreary County Heritage Foundation to renovate and revitalize Stearns, KY and construct railroad-related repairs and improvements to the Big South Fork Scenic Railway.
In addressing the crowd of local residents and government officials who gathered at the Stearns Depot to hear his announcement, Congressman Rogers spoke warmly of his connections with the town of Stearns.
“I have fond memories of time spent here representing Stearns Coal and the Southern Railroad,” Rogers remarked. “Back then, we would meet in the Company headquarters which is now the Museum. I grew up in the community of Barrier in Wayne County just eight or nine miles down the road on HWY 92. My dad’s store in Barrier was one of the few stores outside of Stearns where miners were allowed to trade with script. I still have some of the script.”
“Stearns was once a major hub for coal and lumber exports, and helped build a stronger economy in Southern Kentucky. This project will breathe life back into this historic town by investing in our story and tourism in our unique region,” said Congressman Rogers, who has championed $80 million in federal funding for Kentucky through the AML Pilot program since 2016 alongside Senate Majority Leader Mitch McConnell (R-KY).
The 1.1 million dollar AML grant will be used in conjunction with a two million dollar Economic Development Area (EDA) grant awarded to the Foundation earlier this fall. According to MCHF Chair JC Egnew, first priority for utilization of the two grants will be revitalization of the BSFSRY five mile track including the track in to Blue Heron. Other high priority needs include expansion of the railroad bridge crossing Paunch Creek to allow development of a hiking/biking trail from Blue Heron to Yamacraw. Additional priorities include upgrades to existing locomotives including primary and back up motors and an extension of the Stearns Depot’s loading platform. The extension will allow all six cars of the passenger train to be loaded directly from the loading platform.
With only rough estimates of cost for the prioritized railroad work, it is presently unclear how much money will be left over for additional improvements. However, any remaining funds from the AML and EDA grants will target maintenance and improvements of downtown Stearns historic buildings.
“Certainly, the revitalization of our downtown historic buildings plus the rebuilding of the Stearns Restaurant are high priority for the Foundation,” stated MCHF Chair JC Egnew.
Members of the Foundation are hopeful an already submitted Appalachian Regional Commission (ARC) Power grant will be approved as those funds are designated primarily for the restoration of downtown historic area. If received, the ARC funding will provide a facelift for the town of Stearns and restore businesses and shops devastated by fire in 2012. The downtown Stearns buildings were built in the early 1900s as a company town and central hub for the Justus S. Stearns coal and timber empire. Downtown Stearns is currently listed on the National Register of Historic Places.