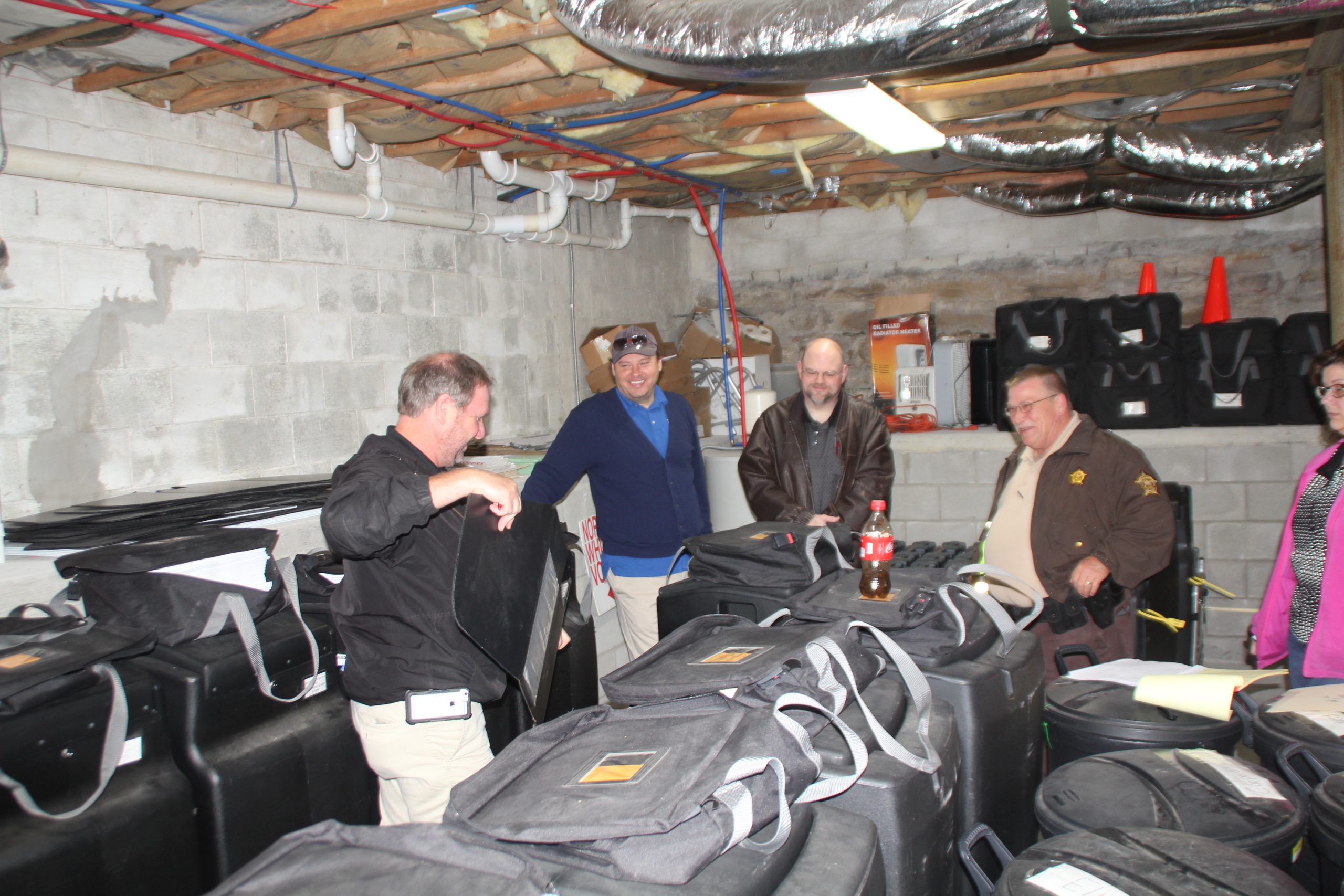 The 2018 General Election is less than three weeks away, and local election officials are gearing up for a long day on November 6.
Tuesday morning the McCreary County Board of Elections met with County Clerk Eric Haynes to certify the voting machines that will be placed in all 18 precincts in the county on election day.
Due to the large number of write-in candidates (seven) in this year’s election the board discussed the probability of not counting the individual votes until the next day, Wednesday, November 7. On election night the vote totals will include the number of write-in ballots cast, but the Board will have to individually verify each write-in vote.
Countywide races include Judge Executive, PVA, Sheriff and Jailer. All voters will also be asked to cast their ballots for United States Representative, State Representative, and Justice of the Supreme Court
Voters in Cumberland Falls, Eagle, Mill Creek, North Whitley and Wiborg will vote for Magistrate and Constable in District 1. Cooperative, Otter Creek, Pigeon, Smithtown, South Whitley and Wolf Creek will vote on District 2 races for those offices. District 3 races for Magistrate and Constable include precincts of Revelo, Stearns, Strunk and West Pine Knot. Bethel, East Pine Knot and Elm comprise District 4 and will have choices in both races as well.
Two School Board seats will also be on the ballot. Voters in Elm, Otter Creek, Revelo, Strunk and West Pine Knot will vote for the District 2 seat. South Whitley and Wolf Creek will vote for District 4.
Some candidates for office have no challengers, but will appear on the ballot. Commonwealth’s Attorney candidate Ronnie Bowling Jr., Circuit Clerk Othel King, County Attorney Austin Price, County Clerk Eric Haynes, and District Judges Cathy Prewitt and Fred White all have no opposition.
State Senator Max Wise will also be the only name appearing on the ballot, but does have a write-in opponent: Nichole Britton. State Representative Ken Upchurch has a challenger in his race: Democrat Dean Sumpter.
Also appearing on the ballot is a proposed constitutional amendment.
Named “Marsey’s Law” the amendment would grant victims of criminal acts similar rights as to those accused of crimes.
Voting on the amendment may not enact in to law, however.
On Monday Franklin Circuit Court Judge Thomas Wingate ordered election officials to not certify the votes on the measure, due to a legal challenge.
The Judge ruled the wording on the proposed amendment is not sufficiently clear for voters to properly cast their vote on the issue.
The ruling came too late to remove the question from the ballot, and an appeal on the ruling has already been filed.
The wording on the ballot reads: “Are you in favor of providing constitutional rights to victims of crime, including the right to be treated fairly, with dignity and respect, and the right to be informed and to have a voice in the judicial process?”
The law was named after a California in the 1980’s. Kentucky is one of six states set to vote on the proposal this year