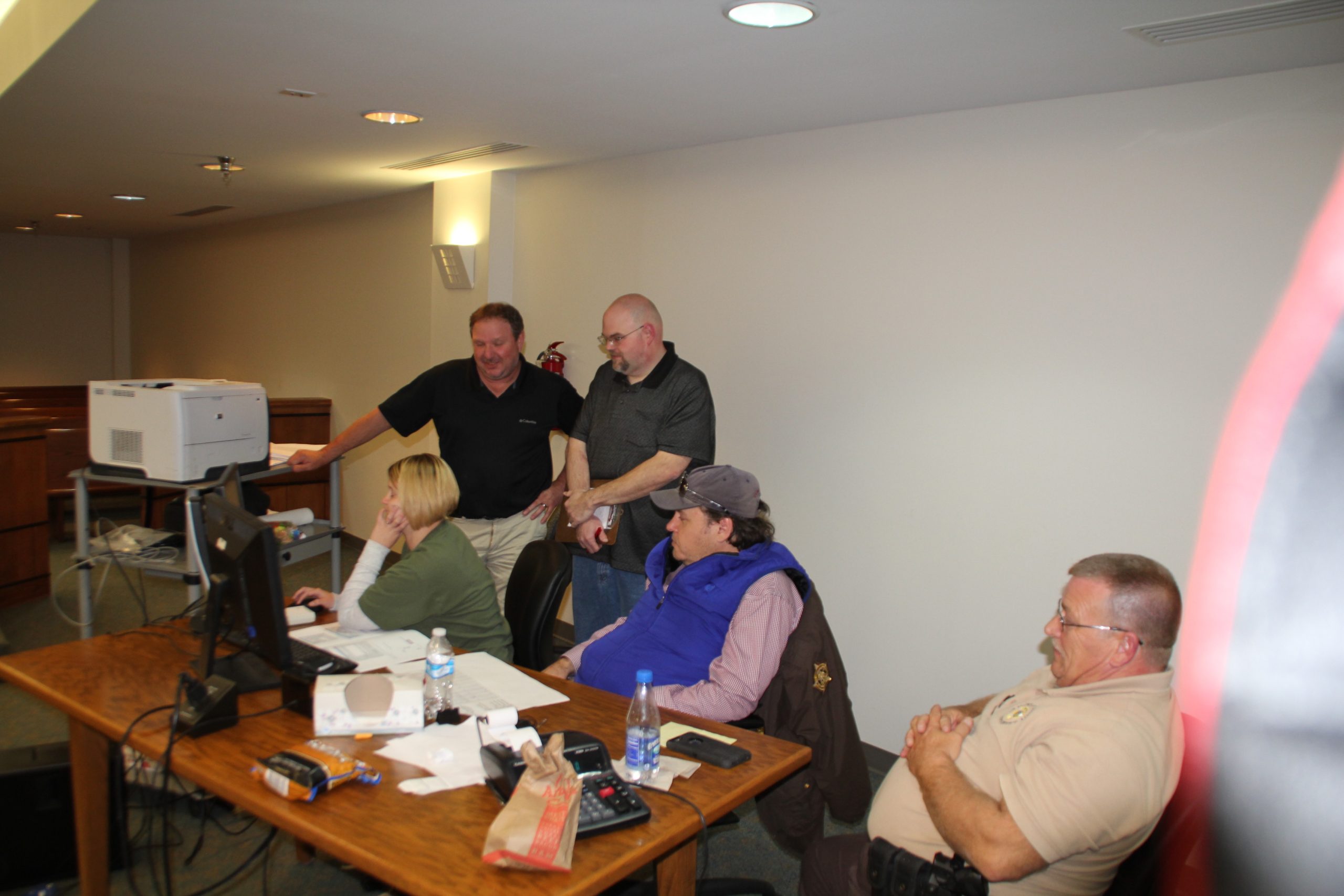 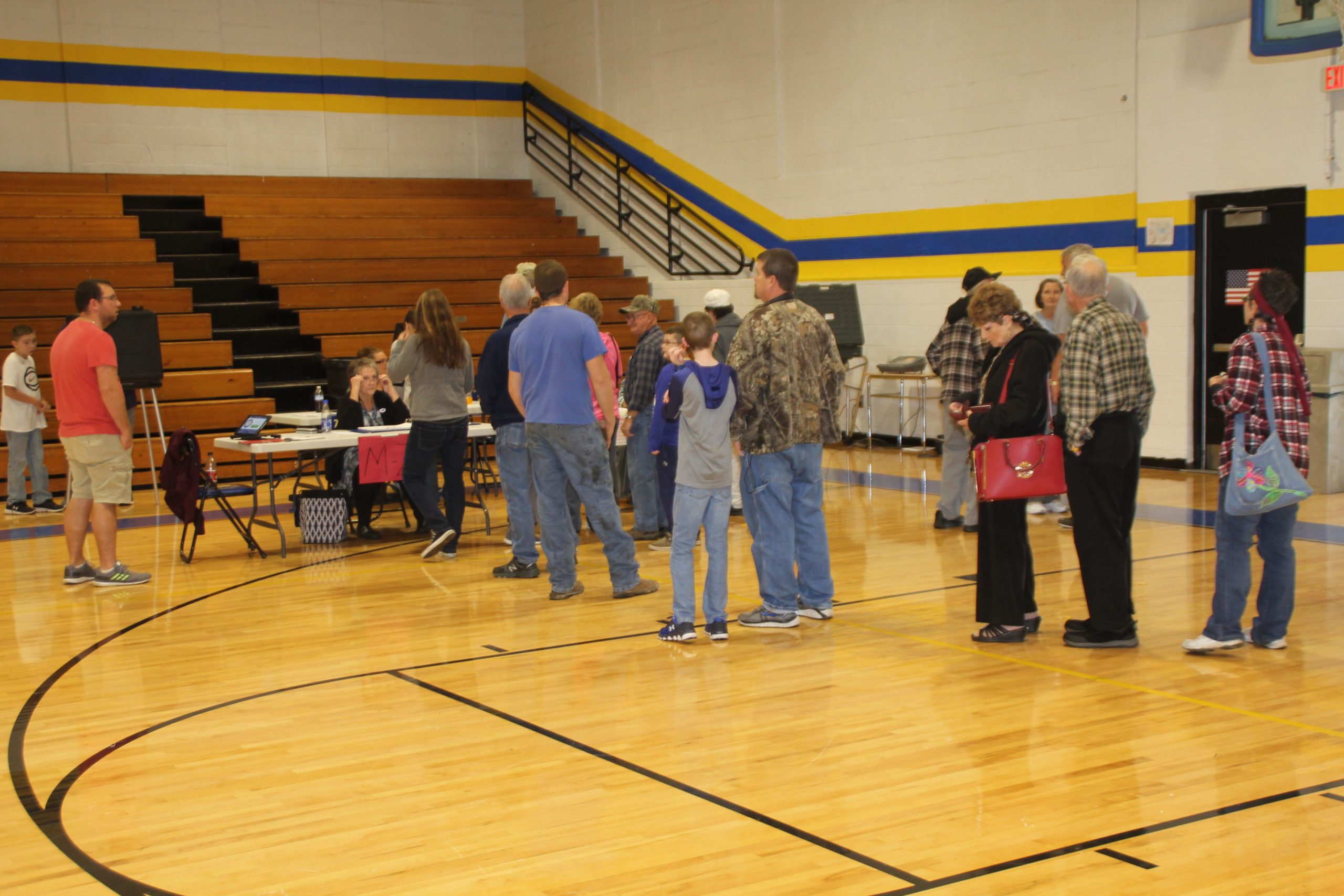 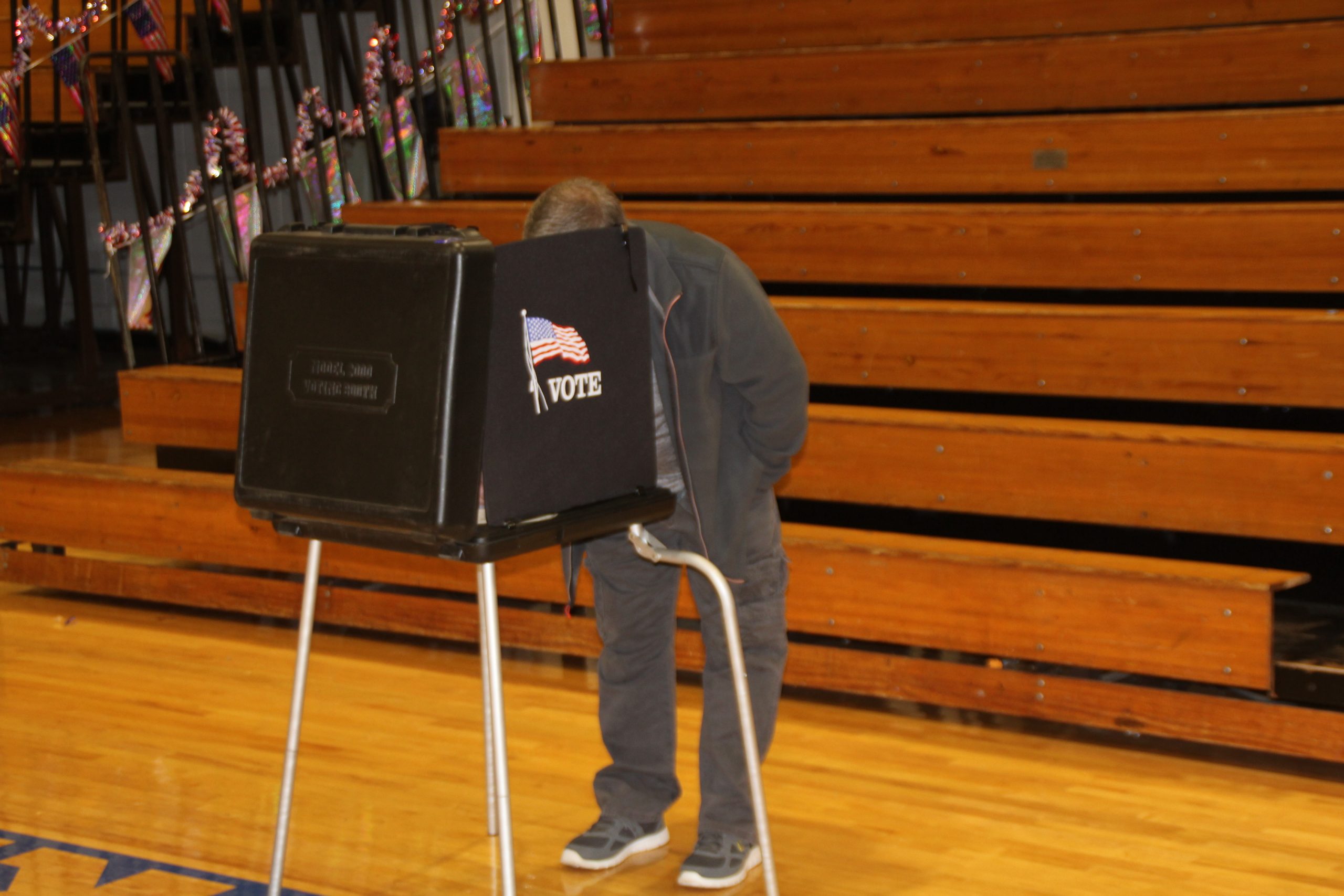 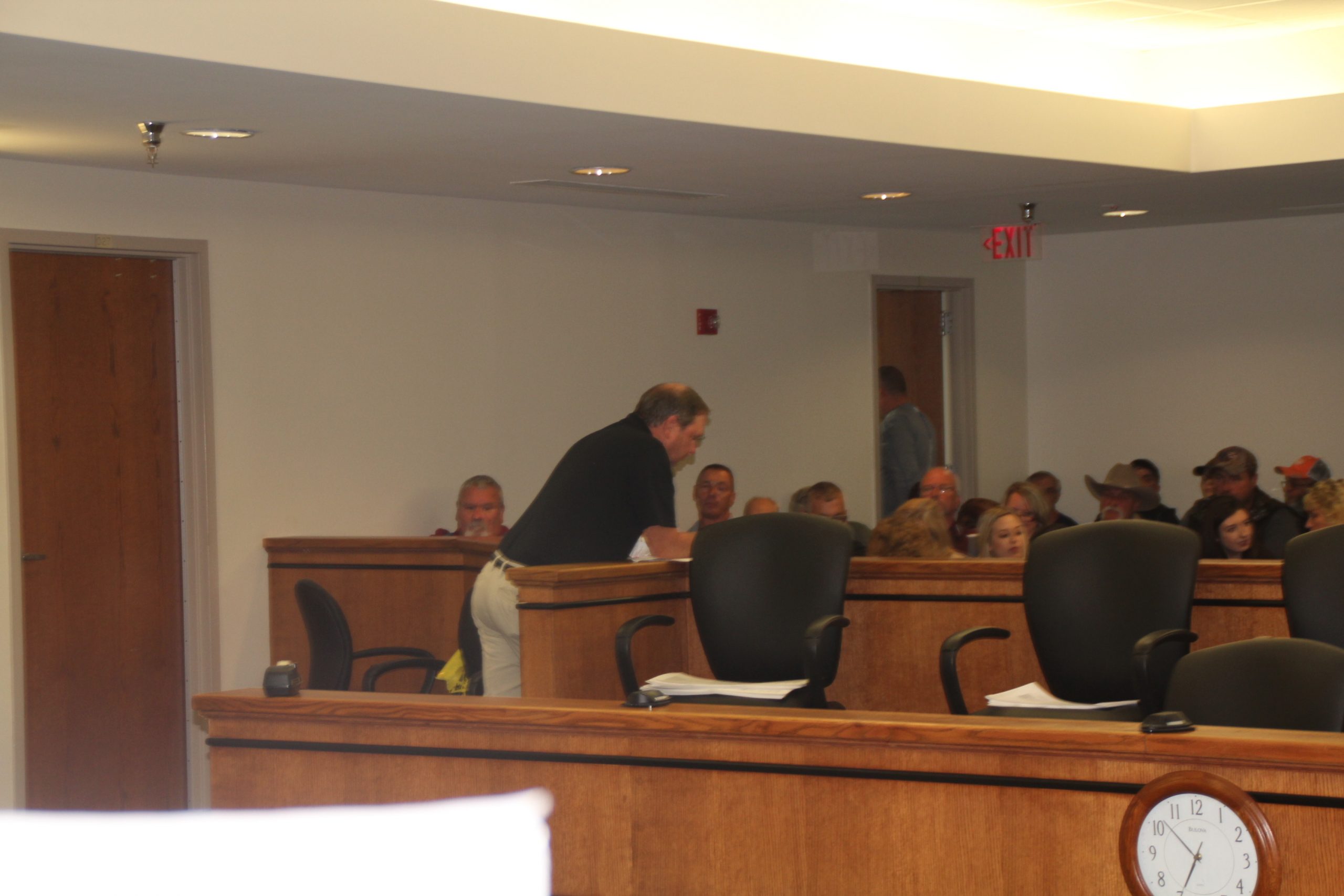 It was an historic night for McCreary County in the 2018 General Election Tuesday night as a dozen newcomers were elected to local seats, giving McCreary County a new-look government for the next four years. Of four incumbents facing opposition in the election, Sheriff, Jailer, 2nd District Magistrate, and School Board District 2, three easily held off their opponents for a new term of office, while only one failed to gain enough votes for a return to office.
It was also a night of decisive victories, as only one race was separated by 10 percent of the vote total, and only one other by 15 percent.
The six write-in candidates in five races may have played spoiler in two contests, but otherwise not major factors in the final tally.
Voter turnout was strong throughout the day as 5,251 registered voters cast a ballot, 46.92 percent of the total. The turnout was not quite as high as the 2016 election, where more than 52 percent turned out. Voter participation was slightly ahead of the last county-wide election in 2014, which saw a 46.82 percent turnout.
Leading the charge was McCreary County’s newest Judge Executive, Jimmie “Bevo” Greene, who was swept in to office with an overwhelming victory over Independent challenger Scottie Morrow. Greene took more than 85 percent of the vote total, grabbing 4,201 votes. Morrow finished the night with 740 ballots cast in his favor.
After his victory Greene said he is ready to step in and learn the job by shadowing Judge Executive Doug Stephens over the final weeks of his administration, and is already scheduled to attend meetings as Judge-elect.
“The tough part starts now,” he said. “I give glory to God, and thank all those who put their trust in me.”
Sheriff Randy Waters was elected to a second term Tuesday, the only Democrat to win locally Tuesday night, not only had to overcome two challengers to his seat, but also the straight-party Republican votes cast in the election.
Waters garnered support of more than 48 percent of the county with 2,441 total votes, holding off Republican challenger Milford Creekmore who finished with 1,594 votes (31.6 percent) and write-in Gus Skinner who pulled 994 votes (19.7 percent). The other write in candidate, James Tapley, did not receive a single vote.
Waters’ win was more impressive considering 1,218 voters cast their ballot with a straight-party Republican ticket, compared to only 209 straight-party Democrats.
Following the win the Sheriff thanked the citizens and vowed to continue the progress he had accomplished in his first term.
“I want to thank all my supporters in McCreary County,” he said. “I look forward to the next four years. We will continue working hard to clean up the epidemic of drugs and keep this county moving forward.”
Jailer Jessie Hatfield was another incumbent with a strong victory, ensuring a second term. Hatfield pulled 53 percent of the votes to hold off Independent Tony Hansford (29.8 percent) and Democrat Derek Jones (16.8 percent).
2nd District Magistrate Roger Phillips was re-elected to his fifth term with a strong win over write-in challenger Barbara Duncan. Phillips, who held off three challengers in the Primary, pulled 993 votes to Duncan’s 203 to keep his seat.
The only other incumbent running with opposition, Brandon Kidd, McCreary County Board of Education Division 2 representative, lost his bid for a third term to challenger Braxton King. King pulled 595 votes to Kidd’s 438, a margin of victory of just over 15 percent.
The other Board of Education seat in Division 4 was being contested between Lori Foster and Melissa Maxwell. Foster finished with 58.4 percent of total votes cast in the race to Maxwell’s 41.53 percent, and will take the seat next January.
Three Magisterial Districts were up for grabs Tuesday night, with Republicans winning all three.
In District 1 Bill Hale pulled 78.9 percent of the votes to hold off Democrat Lillian Frasure Taylor (21 percent).
Hale expressed enthusiasm to take the seat, and said he was ready to get things started on the Fiscal Court.
“I’m ready to get started,” Hale said. “Let’s get out county moving forward.”
District 3 was a 4-man race, with Republican Bobby Strunk emerging victorious. Strunk in the closest race of the day.
Strunk finished with 515 votes, for 41.8 percent of the total. Democratic challenger David Price pulled 387 votes for 31.4 percent – a margin of just under 11 percent. Write-in Bobby W. Strunk finished third with 250 votes, and Independent Johnny Corder pulled just 79.
Strunk said he was glad the campaigning was over and vowed to do his best.
“I will make everyone proud,” he said. “I promise to do a good job. I will be available for all my constituents when ever they need me.”
District 4 Magistrate Randy Maxwell was elected to his first term with 1,069 votes to Hope Daugherty’s 147.
A change is coming to the PVA’s office as Dwight Ross will take over the office next month. Ross, who defeated incumbent Bruce Lominac in the spring, took over 75 percent of the votes (3,761) to Joni Carson’s 24.57 percent (1,225.)
Three new Constables will take to the streets after the election. District 1 saw Darrell Hansford easily win over Chuck Duncan and Donnie Smith. Brad Waters regained a seat he held previously, over incumbent Freddie Clark, who was running as a write-in after a failed bid for Sheriff, and Steven Cox. Cody Stephens (District 3) and David Kilby (District 4) were unopposed this fall.
Four local offices had no opposition and won re-election. County Clerk Eric Haynes was the top vote getter of all candidates on the ballot in McCreary County, pulling 4,580 votes. Circuit Court Clerk Othel King, County Attorney Austin Price and Coroner Tim Corder were also winners on the night.
Commonwealth Attorney Ronnie Bowling, and District Judges Cathy Prewitt and Fred White were also unopposed in the election and won the night.
Jimmy Watters was elected to the County Surveyor post, the first time that position has been filled for a while.

In other races on the ballot locally, 5th Congressional District Representative Harold “Hal” Rogers won strong locally, and District-wide over Kenneth Stepp and write-in Bobby “Ray” Wilson. Rogers pulled 4,323 votes locally to Stepp’s 637 (Wilson did not receive a single write-in vote in McCreary.) Overall in the District Rogers defeated Stepp by more than 127,000 votes for his historic 20th term.
Kentucky 52nd District Representative Ken Upchurch defeated challenger Dean Sumpter with nearly 73 percent of the overall vote in the District.
In the Kentucky Justice of the Supreme Court race Judge Dan Ballou performed well in McCreary County, outpacing his opponent 3,773 to 877. But Lambert was stronger nearly everywhere else – winning with over 65 percent of the overall vote total.
It appears 16th District State Senator Max Wise won re-election over write-in challenger Nichol Britton. Wise had 3,936 votes in McCreary to Britton’s 77. Overall Wise pulled 33,447 votes (Britton’s write-in totals were unavailable as of press time.)
The constitutional amendment, known as Marsey’s Law passed locally by a margin of less than 500 votes, but overwhelmingly statewide. “Yes” votes in Kentucky outpaced “no” with over 62 percent of the total vote. As of this week the votes will not be certified as a Judge had ruled the question on the ballot was too confusing for voters. A Supreme Court decision could overturn that ruling, or the measure could be brought up again in the spring.
Full local vote totals can be seen on page 5A in this week’s edition of the Voice.