Jail -A -Thon raises money for worthy cause 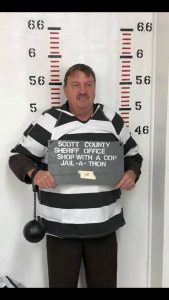 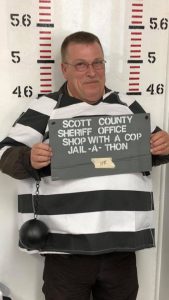 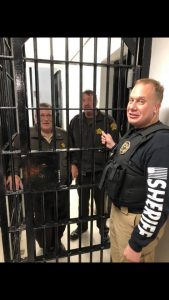 Sheriff Randy Waters and Deputy Tom Smith donned prison garb Friday as part of a fund raising effort for the Shop With A Cop Program. The officers will team up with other law enforcement officials from McCreary and Scott County to take children shopping for Christmas.

McCreary County Sheriff Randy Waters and Chief Deputy Tom Smith were “arrested” in Scott County Friday after some individual swore out warrants against the two lawmen. The dangerous duo posted a $50 bail and were released shortly afterwards.

No, the pair of local officers were not charged with any criminal activity, they were taking part in the first ever “Jail-A-Thon” to raise money for the annual Shop With a Cop program. Sheriff Waters and Deputy Smith were just two of dozens of individuals rounded up and processed in the old Scott County Jail, with all the proceeds from bail going to the program.

On December 18 local officers will team up with a child to take shopping for gifts and other needed essentials. Each participating officer will be allocated an equal amount of money for the youths to by what they want.  In many instances, these youths use the money to buy practical items such as clothing and toiletries, and even gifts for younger siblings.

Last year more than 120 youths had some of their Christmas wishes fulfilled through the program.

“It’s a great event for a great cause,” Sheriff Waters stated. “Every year we team up with the fine people in Scott County to bring a little Christmas joy to kids in both counties. It is always a pleasure to see a child’s face light up when you take them down the aisles.”

“It teaches them that police officers are their friends, and also reminds us how precious these children are.”

If you would like more information on Shop With A Cop, or would like to donate, please call 423-663-3111 or money can be deposited in the special account at the United Cumberland Bank.